It’s the old Archivist DJ spinning stacks o’ wax from dawn to dusk with a whole new blast of chart-bustin’ hits from that king of sing, that hepcat seadog, Popeye the Sailor.

I don’t know when comic strip stars started recording for phonograph records. I have a 1924 novelty toy disc purporting to be Andy Gump reciting his platform for running for president. “On Prohibition, I don’t care if they ban forever the scourge of evil liquor!…-I just want  some of the GOOD stuff!” Andy lost to Coolidge that year.

When was Popeye  first featured on a record?  Likely there would have been a Paramount-Publix issue of “I’m Popeye the Sailor Man” when the animated cartoons first appeared. I do know that since the time the old theatrical release cartoons came to television, a host of records came out as part of the general deluge of Popeye licensing in the late 1950s. They continued right into the 1980s, and followed the cartoons around the world. 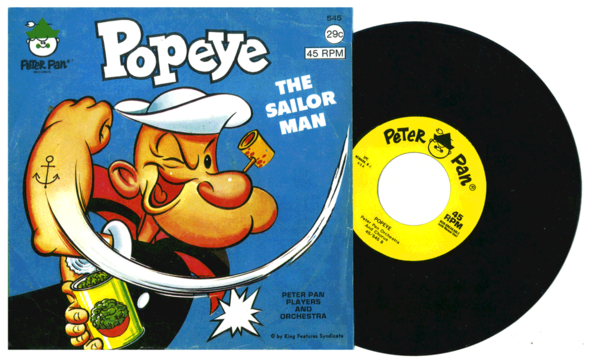 An example of one of the American Popeye records, a Peter Pan title from circa 1965.
The artwork is pretty poor, but it’s not the worst.

In 1959, the Barclay label of Paris included
a fold-out recap of the story on the record.

It was based on an August 1956 story in the strip,
then by Ralph Stein and Bela Zaboly.

The Japanese publisher Asahi Sonorama put out a
storybook with a 33 1/3 record in 1971.

In it, Popeye takes on sharks, volcanoes and cannibals,
yet can’t do anything about dreadful artwork.

Indigo records of Milan issued these three recordings of
Braccio Di Ferro (“Arms of Iron”) about 1980. 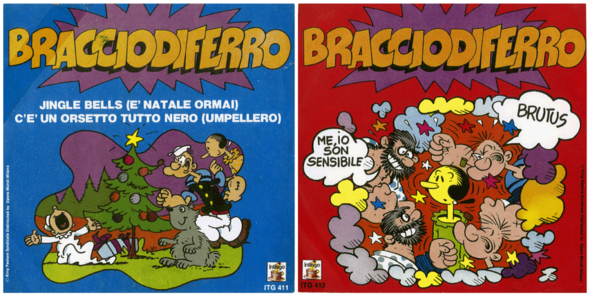 The one on top shows the front and back covers. The two below include a Christmas special.
Who knew the Italians sing “Jingle Bells”? 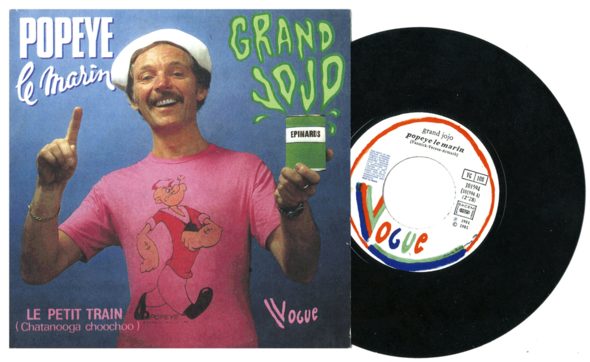 Ever hear of a Grand Jojo? Well that’s him, peering out from the cover of this 1981 Belgian specimen. He’s a big star over there, and has been for more than forty years. His métier is parody songs, sort of a Flemish Ray Stevens. Note the flip side of this disc is a new version of “Chattanooga Choo Choo.”  Made by Vogue P.I.P. in France.

The Cartoon Museum Mort Walker print “Philosophy” is probably not extremely valuable, I see at this moment I can buy from an online dealer the same thing with Mort’s autograph for $29.95.

See you again next week,