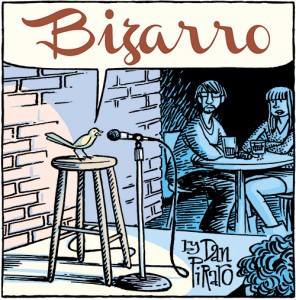 (Anyone can make these cartoons bigger by clicking on them. Are you anyone?) 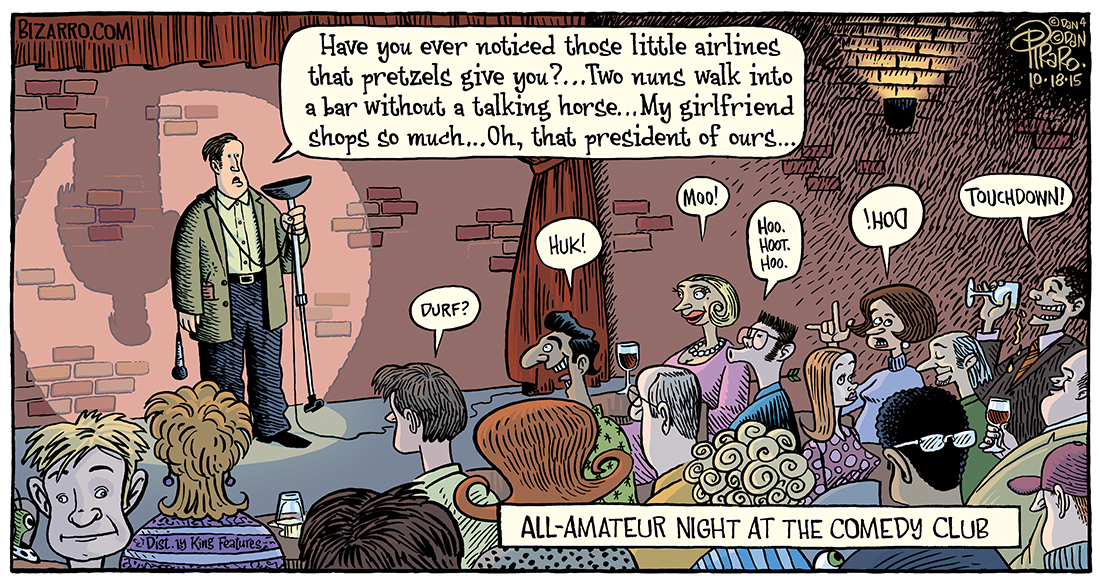 Bizarro is brought to you this week by A Lighthearted Message from the NRA.

Most comedy clubs have amateur nights of some sort––which they now usually call “Open Mic Night”–– but in this case, even the audience is full of amateurs. More advanced comics readers will also notice that even the spotlight isn’t sure what its job is. I’ve done a fair amount of stand-up comedy in my day and I highly recommend it to anyone who has ever been curious about it; making a roomful of strangers laugh is even easier than it looks and not scary at all. Unless you have any fear of standing under a bright light in public and experiencing the deafening silence of complete and utter rejection. 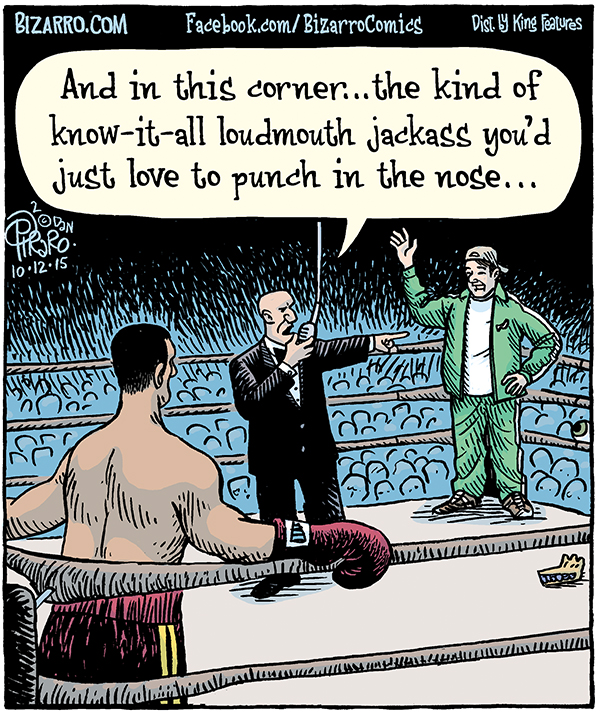 I like this “know-it-all, loudmouth jackass” cartoon a lot. Being a male and therefore full of testosterone, my first inclination when faced with a complete jerk is to punch him in the mouth. Being 5’7″ tall and under 150 lbs., I have learned to override that desire almost instantaneously. On a side note, a reader suggested this would have been even more perfect if they guy was talking on a cell phone. SO right. Wish I’d thought of that. 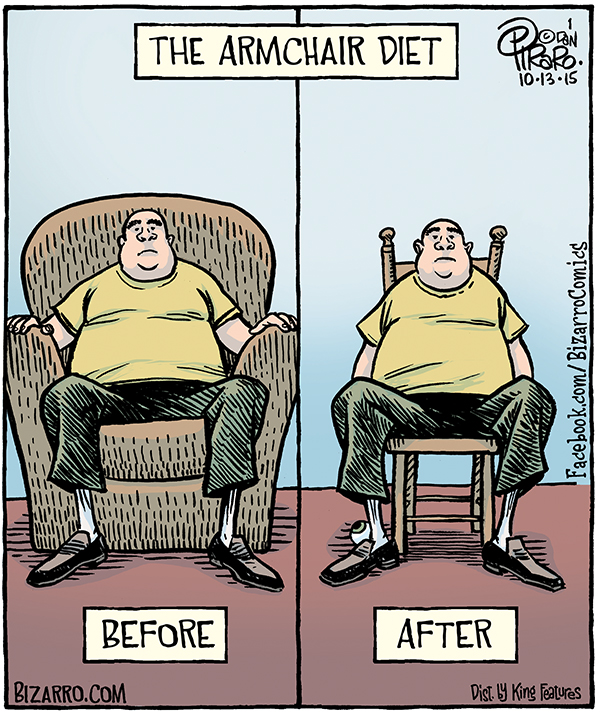 People are always looking for an easy way to lose weight without doing any work, so I created this “armchair diet.” It still has some bugs to work out. 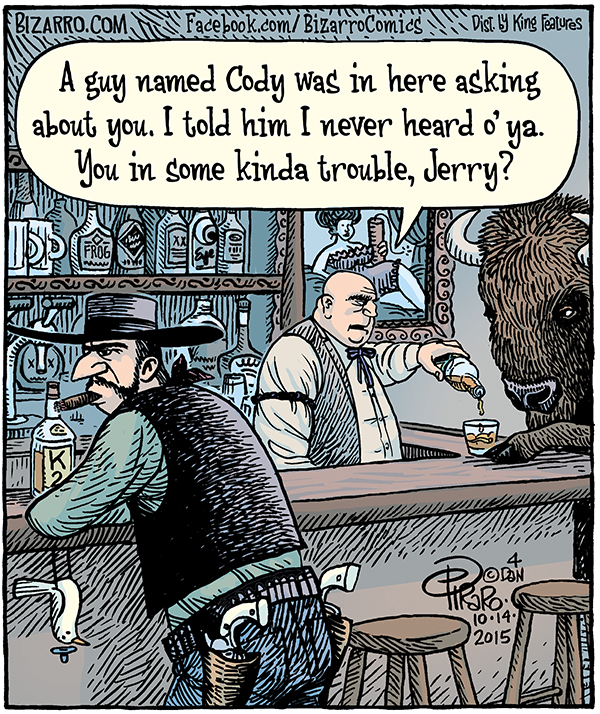 Lots of people were confused by this joke about the buffalo in a bar. As far as I can tell there were two main reasons: they didn’t know who “Cody” was referring to, or they didn’t know who the bartender was talking to. Cody was the last name of Buffalo Bill Cody, a famous buffalo hunter in the Old West, and the bartender is talking to the buffalo (more correctly called an American Bison but then we call pre-European natives “Indians” when they’re not from India, so why get all pedantic now?) I confess that in the cartoon that was published in the paper and on websites, the eye of the bartender was drawn in a way that you could not clearly tell who he was looking at, so I suspect many readers assumed he was talking to the man on the left, which would be confusing. I fixed the eye for this post so there’s less doubt. 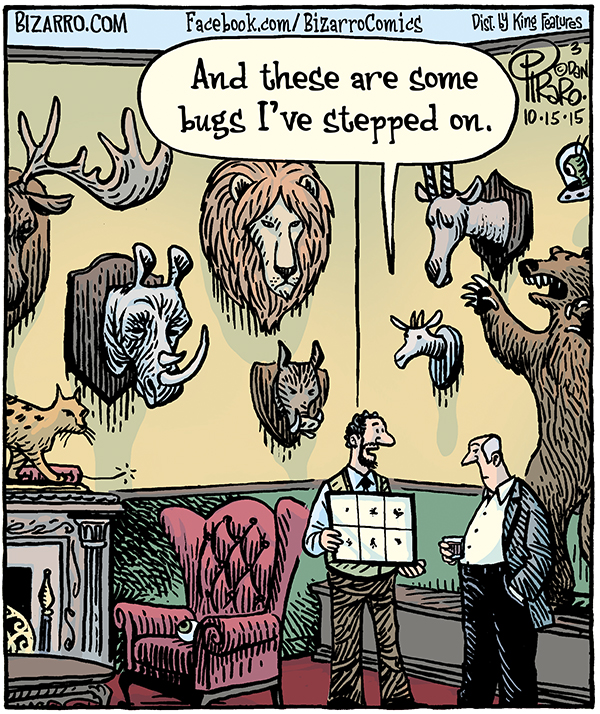 I can understand people who hunt animals for food but I have no sympathy for those who trophy hunt. Yes, your weapon is more powerful than an unarmed creature. Congratulations. 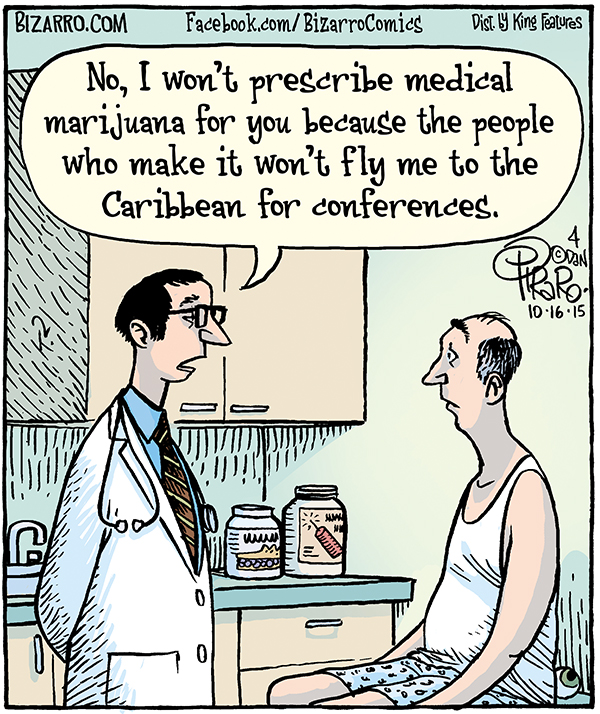 Don’t get me started on the way I feel about marijuana laws. Too late, I already did it by publishing this cartoon. The idea for this gag was sent to me by my Canadian friend, Russell Barth, a well-known activist for changing our absurd and inaccurate attitudes toward the cannabis plant. It has been shown time and time again to be tremendously safe and effective in a wide variety of medical uses, and utterly harmless in recreational use, especially as compared to tobacco, alcohol, and any number of prescription drugs. The absurd propaganda we’ve received about it in the last 100 years is finally beginning to be replaced by the truth and local governments are dropping their expensive and pointless prosecution of users, growers and sellers. I pray the U.S. federal government comes to its senses soon, as I’d like to live in a country that treats its adults like grown-ups. Wouldn’t you? 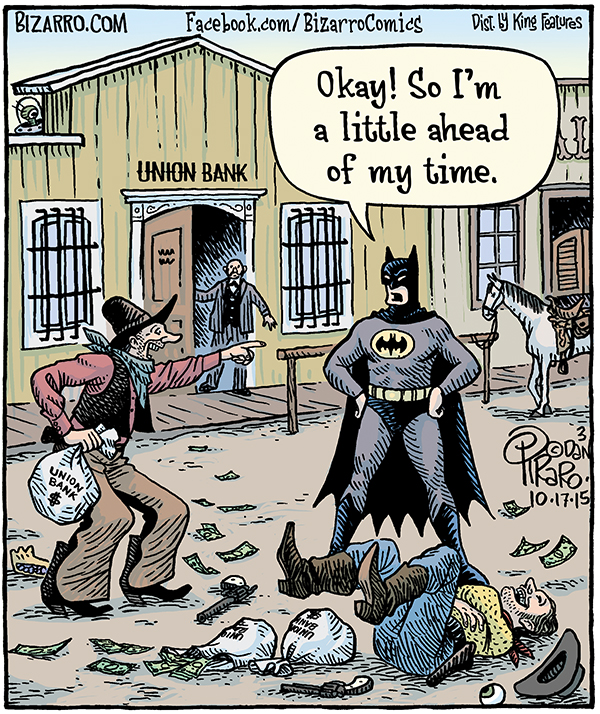 I was wondering one day about the effect of Batman on criminals of the Old West and it made me laugh hard enough to drop my bagful of money as I ran from the bank, so I drew this cartoon.

One last thing before I go: My two average daughters (see below) have started a fun little online store that I’d love for you to check out. They’re hardworking gals who are not rich (and neither is their dad so he can’t help them out as much as he’d like) so feel good about tossing them a buck or two.  And while you’re at it, like their Facebook page. For some reason, that seems to be important to people their age. Thanks, Jazz Pickles! 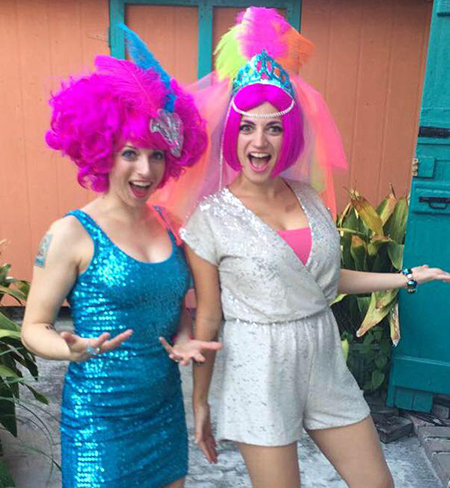