Ask the Archivist: ON THE RECORD 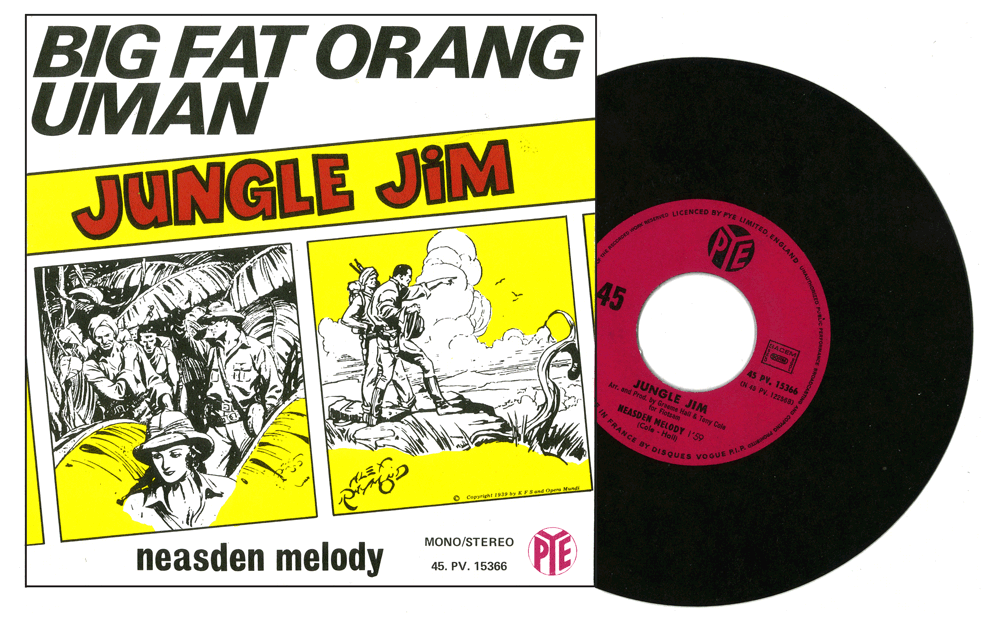 Hear any good comic strips lately? Once upon a time, before downloads and Mp3s, and iTunes and e-whatsits, we got our music the old-fashioned way, on phonograph records. Your Archivist eagerly collected these artifacts of and in bygone days with gusto, perhaps overdoing it. Now I have everything from the Van Eps trio to Vaughn Meader, The Okeh laughing record to a Japanese version of “Oh, My Papa.”

Today I’ll show some records that are King Features-oriented — 45 rpm records from Europe you probably haven’t seen too often.

JUNGLE JIM in a French single produced by Disques Vogue, circa 1975.
The art on the sleeve is from a 1939 Alex Raymond strip.

FLASH GORDON- Italian RCA, 1981. The cover art is from the 1979 Filmation series, so the “original cast” designation could be whoever did the dubbed-over voices when they were shown on Italian television. 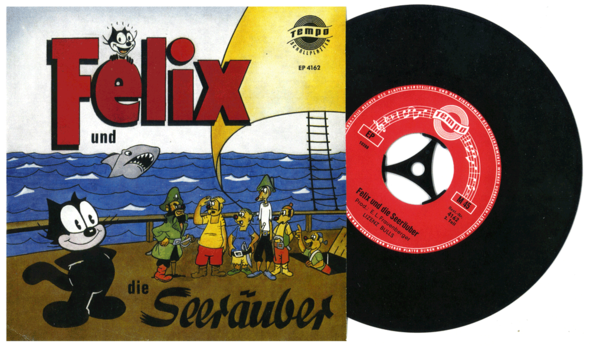 FELIX in another Tempo Langspielplatten, using the comic strip Felix,
as opposed to the Joe Oriolo TV version shown above.

FELIX en Français was put in out in 1959 by the Parisian label Barclay. 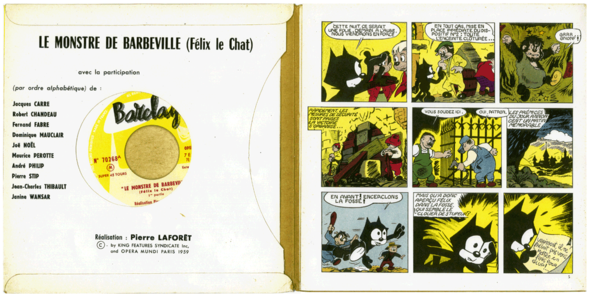 It was a five-page foldout which (I assume) followed the recorded FELIX story.

THE PHANTOM (as FANTOMET) does a cassette tape for A/S Interpresse in Denmark, 1979.

Now, on to the Mailbag.

“Right around Home” was similar to “What a Family” only in format–Myrtle and her friends were on the opposite spectrum of the Looney family. They were all sweet and wholesome, but, in the same situations, la familia de Loon would be on some kind of rampage. The Farkle family, like the Looneys, had red hair, they were gap-toothed and  freckled, too, giving them a weird Pippi Longstocking-like appearance, but that wasn’t to emphasise they were wild, but more that they rather too closely resembled the guy next door who had the same look, wheras Mr. Farkle did not.

The same general cartooning style pertains in What A Family as in They’ll Do It Every Time. Call it the Hatlo House style. He had several fellows doing the T-DIET and Little Iodine comics and comic books. Since it’s obvious that Colin Allen wasn’t the only cartoonist at work on the Looney family, it could have easily been some of the Hatlo or KFS clean-up guys involved.

Charles Allen and Colin Allen were two different men. There’s been some confusion on this point.  I suppose that one could have worked with the other at some point, but they have different styles. I offer two pages from Mike Lynch’s site with samples from both men from the book “Best cartoons Of The Year 1944”:

I’d love to show more, I confess I haven’t got many more, but maybe some time in the future. Thanks.