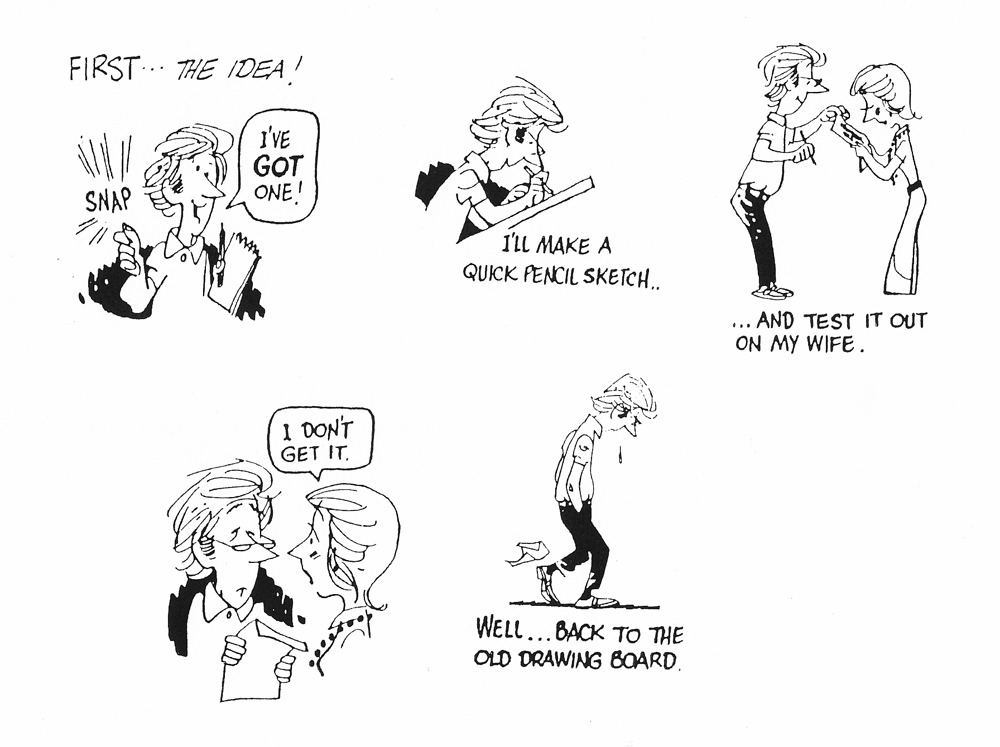 You’ve got to love comics to be a cartoonist– but everyone has their little pet peeves when it comes to even the best jobs in the world!  This week, I asked our cartoonists to talk about their personal pet peeves about cartooning.

I’ve got no pet peeves. I got no peeves period. I love drawing cartoons. Deadlines? Not a problem. I’m 6 months ahead on my dailies. Writing gags? Every once in a while the writing isn’t as sharp as I think it should be, but as Somerset Maugham said, “Only a mediocre writer is always at his best.” I still make myself laugh almost every day.

My cartooning pet peeve is something that used to happen more often in earlier days. It’s this: I’d write a strip, and then when I’d go to draw it the next day, I’d find that the strip is not as good as I had originally thought it was, and actually quite terrible— not worth the effort to draw it! (My enthusiasm goes out the window when I’m forced to draw something that I think is terrible.)

This helped to teach me about distance — and how you should put things away in a drawer for a while and then go back to read them again with fresh eyes. Today, it doesn’t happen as often because I arranged my schedule so that I write strip ideas a whole week before I have to draw them. If I look at an idea five days after writing it, and I still think it’s good to go, then I’m much more confident about drawing it on the 7th day and sending it. I call this system “stewing”…let those ideas stew in the pot a little before going back to them! But even with this system, every now and then, it still happens! ugh!

Cartooning pet peeves! I have many, and they’re all little four-legged vandals. I like to work at my home studio on weekends. Imagine, you’re just about to touch brush and ink to paper when suddenly the two sleeping dogs next to you erupt into a rabid frenzy. This happens to me dozens of times each day as vast herds of squirrels sweep across the lawn, taunting and teasing our dogs as they pass under the window. They do it on purpose — I can see it in their beady little eyes. 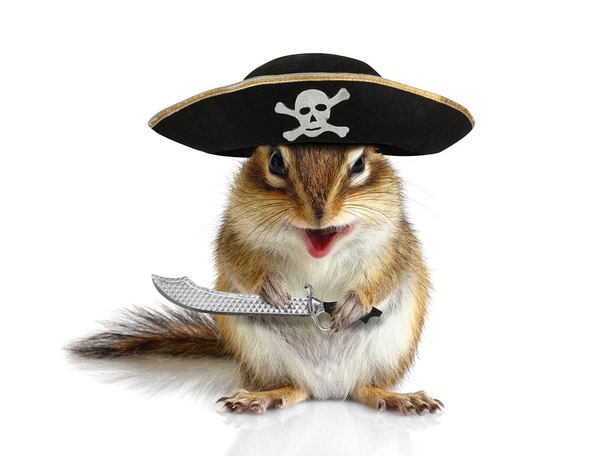 If I have a pet peeve about cartooning it would be how the gods occasionally decide they hate me.

Just last year I was scurrying to get a week’s worth of cartoons finished and uploaded before I left town for a vacation in Mexico when I dropped my Cintiq pen. For those who may not know, many artists these days draw their cartoons digitally directly onto a computer screen, and I am one of these artists. This requires a fancy-schmancy screen and an electronic pen-looking thing they call a “stylus”.

So it’s the night before my flight leaves, I’ve got a few hours of work left to finish before I can quit, and I’ve not even packed yet because I’ve been working too many hours each day to get ahead on deadlines to even think about preparing for the actual trip. Suddenly, for no memorable reason (I wasn’t drunk, I didn’t lose consciousness, I wasn’t attacked by a wild animal) my stylus pen thingy just sort of slipped out of my hand and began to fall to the floor. It would have been no big deal had I just let it fall but instead, out of reflex, my hand shot out to try to catch it. In doing so, my hand hit a small bottle of ink whose lid had not been firmly screwed on. It hit the floor next to where my pen had landed and regurgitated the majority of its contents in the precise direction of the pen, soaking it with shiny, black ink, and ruining its fussy electronics. That is to say, it had been instantaneously converted from an electronic pen stylus thingy to a useless plastic stick that resembles a pen. Suddenly, hours from racing to the airport to catch my flight, I had no way of finishing my work. Since my system is set up this way, I can’t just suddenly go back to doing it the old-fashioned way. If your car broke down on the highway, you wouldn’t be able to just hook a couple of horses to it and continue on your way had the automobile never been invented.

This story has a happy ending, however. I knew that a professional cartoonist colleague of mine in the same city also worked the way I did, so I called him and asked if I could borrow his stylus for the evening to finish my work, promising to return it on my way to the airport the next morning. Fortunately, he was home when I called and not out carousing with prostitutes and gambling away his meager paycheck in an illegal back room poker game as is usually the case with professional cartoonists. He agreed to loan me his pen stylus thingy and disaster was averted.

Right now, my pet peeve about making comic is all the paper clutter I create in my studio. It comes from getting ideas for cartoons at all hours. Sometimes I imagine a fairy godmother coming in to magically clean it all up.

My biggest Pet Peeve about my career is being interrupted when I’m in the zone of creating. I usually like to listen to my favorite tunes when I’m drawing. In fact, I get immersed in it and it totally takes me to another plateau. Once I get in front of my drawing board, my body functions seem to cease. I don’t get at all hungry, I never eat while I’m drawing. I barely even drink anything. I might, in between strips, but that’s about it. I can work all day until I see the sun setting, writing, sketching and drawing. People who really knows me says it’s a strange trait, not eating. Maybe it’s an eating disorder.

HOWEVER, sometimes when the phone rings (and I have o take it), or a family member drops by and comes in, it breaks my Creative Mood. If I get a delivery and have to sign for it, that can also upset my boat. It’s like dropping a rock into a placid body of water. Sometimes, it takes me a moment to get back into that state of mind.

I am pretty much an eccentric loner, especially when doing my work. I live n my mind, and enjoy my alone time. It’s been that way for the better part of my life, and truth-be-told, I basically prefer it that way.

This was Hank’s graphic (no pun intended) description of the agony of the creative process. 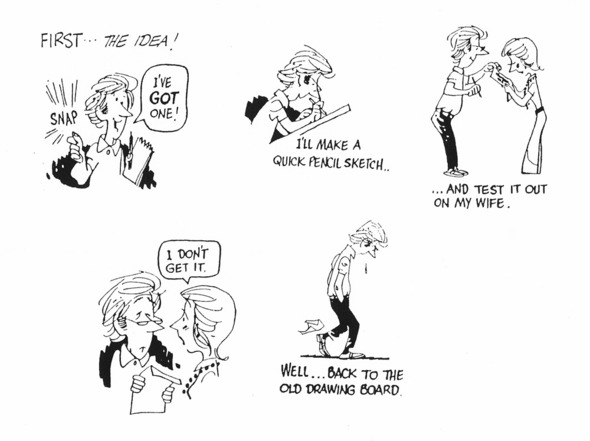 Bill Holbrook, Kevin & Kell, On the Fastrack, and Safe Havens

Not exactly a pet peeve, but I was always uncomfortable delivering original artwork through the mail. That was the procedure for the first few years of doing “Fastrack,” and I always made photocopies of the strips before heading to the post office. (Only once during that time was a batch ever lost, with the backup photocopies ending up being used.) Eventually it became standard to always send clean, camera-ready photocopies, and finally in the late 1990s, using digital uploads.

I address most of my pet peeves in my web comic, Human Cull. It’s a cathartic way of dealing with the people who annoy me (and other people – I take suggestions!). 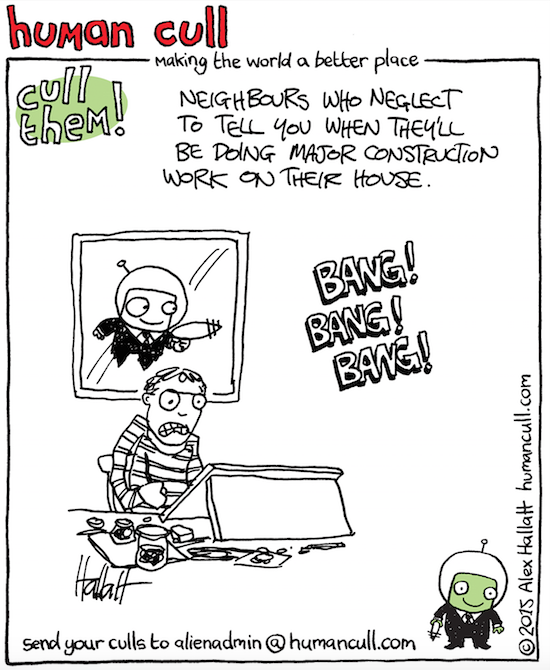