Did you know September is National Chicken Month? I didn’t either– but what I DO know is that Chickens are one of my favorite animals! In fact, I have four chickens: Dotty, Dorothy, Roberta, and Amelia.

Since chickens are one of the most entertaining animals around, I thought it would be fun to ask all of our cartoonists to send me their chicken pictures and chicken stories!

Howsabout some SUPER CHICKEN from the Super Sauce Sketchbook? (And here’s the theme song so you can sing it in your head for the rest of the day! CLUCK CLUCK CLUCK CLUCK!) 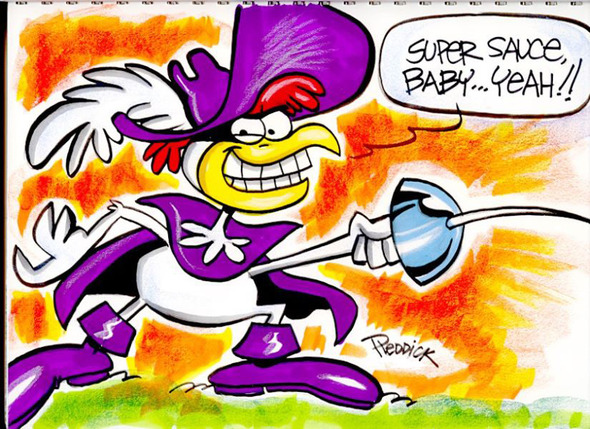 This is based on those “Why did the chicken cross the road?” jokes, but I had to explain to a couple of people. I like chickens too. I didn’t know that they like to eat figs, but when I saw 6 of them in my friend’s fig tree, I figured that they must.  They really looked amazing, and had climbed up pretty far on the tree.

Bill Griffith of Zippy the Pinhead

Zippy loves chickens. Especially the really big ones that follow him around. 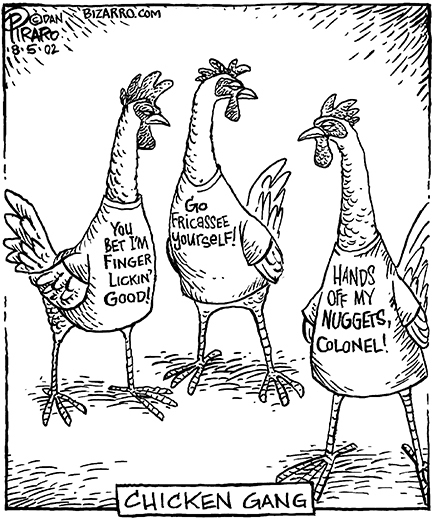 I, too, love chickens! Had a brood of hens for a while growing up back in Florida. It was great having fresh eggs every day and my sister and I sold the rest to neighbors.

And I love drawing them in my cartoons . . . they are regulars in “Pluggers” and “Shoe,” and back in my editorial cartooning years, Chicken Little carried the message a number of times.

I also love drawing and painting them more “realistically” . . . they have such character and charm, and make a wonderful subject matter. 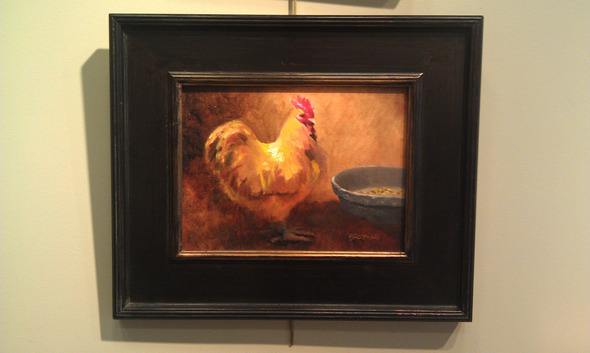 Bill Holbrook of Kevin & Kell, On The Fastrack, and Safe Havens:

Not many recall that the infamous dodos in “Safe Havens” were created when Samantha genetically transformed a commonplace rooster and a hen.

Since the setting of the Barney Google and Snuffy Smith comic strip is very rural, and Snuffy and Loweezy have farm animals, chickens are an important member of the supporting cast! Along with cows and pigs, chickens appear very frequently. Sometimes even in church, as this strip illustrates!

Bud Grace of The Piranha Club:

Marcus Hamilton of Dennis The Menace:

Hank introduced Dennis to farm-life when he visited Uncle Charlie and Aunt Sarah on their farm occasionally. On each visit, Dennis learned something new about farm animals, or he brought a new perspective to Uncle Charlie with his five ana-half year-old viewpoint on chickens. 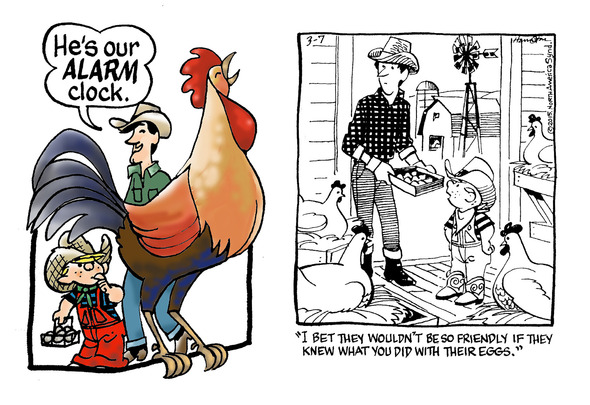 Here’s a drawing of my chicken! 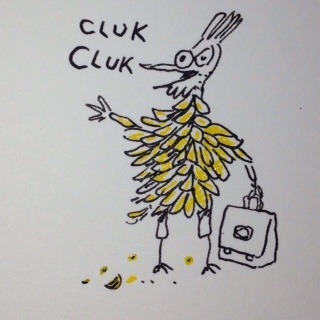 John Hambrock of The Brilliant Mind of Edison Lee:

Hilary Price of Rhymes With Orange:

A chicken tale, dredged from the 2004 Rhymes With Orange Charming-Yet-Infrequent Newsletter which you can sign up for here.

(Note: this happened to my former partner Kerry. We aren’t an item anymore, but are still happily co-parenting our giant dog.)

—One of my partner’s jobs is in an inner city elementary school in Springfield, MA. Last week, someone noticed a chicken walking around the side parking lot.

This caused significant buzz in the school, and lots of discussion on whether it was a “a chicken or a rooster.” While Kerry did not grow up amongst chickens, she did know that a rooster IS a chicken, and that the ACTUAL question was whether it was a rooster or a hen.

When it was still there the next day, Kerry took action. She called Animal Care and Control, who informed her that, sorry, they do not handle domesticated animals, but here is the number for the Humane Society.

Kerry called the Humane Society, told the woman on the other end about the 48-hour rogue chicken, as well as her concern that it might be hungry, and waited for her response.

There was a pause.

“There is no leash law for chickens,” the woman said.

“There is no leash law for chickens,” the woman repeated, “so we can’t come get it. Technically, it’s not breaking the law. Sorry.”

Kerry broke the news to her team of teachers. She then looked out the window and saw the high school math teacher trying to corner the chicken in the parking lot. Feathers flew while the chicken flapped its wings and ran away from him.

Kerry does not know what actually happened to the chicken.

But think about it– of all people, the math teacher should know better than to try to corner a chicken on an infinite plane…