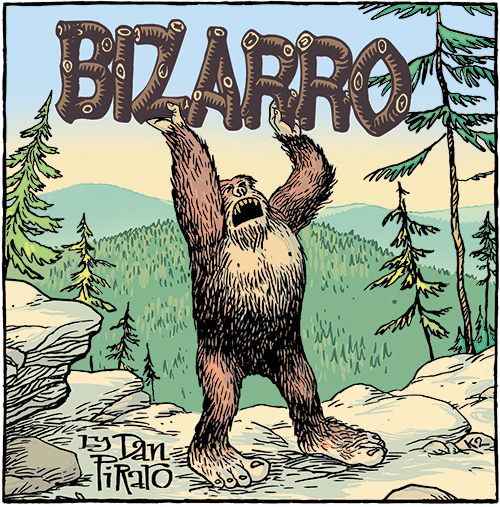 (To enlargenize the cartoon below, just click the city boy’s spleen.)

Bizarro is brought to you today by Creepy Mannequins. 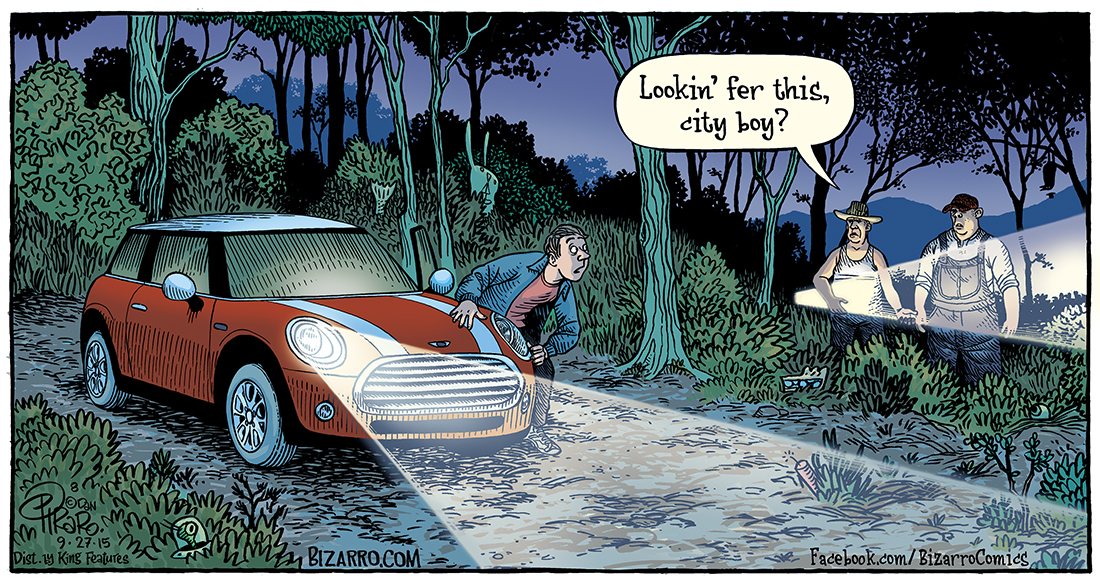 I’ll start today by saying I really love the title panel at top. It was cobbled out of a piece of an old Sunday cartoon of mine from ’08 which is one of my favorites. You can see it here. The “City Boy” cartoon itself is another of my favorite concepts. I actually published this idea several decades ago as a weekday cartoon but it was before cartoons were featured on the web and before I had learned to color my own work for print in Photoshop. SO –– I couldn’t resist redoing it with better art and color. I hope you enjoy the creepy goodness of the bottom-lit hillbillies. 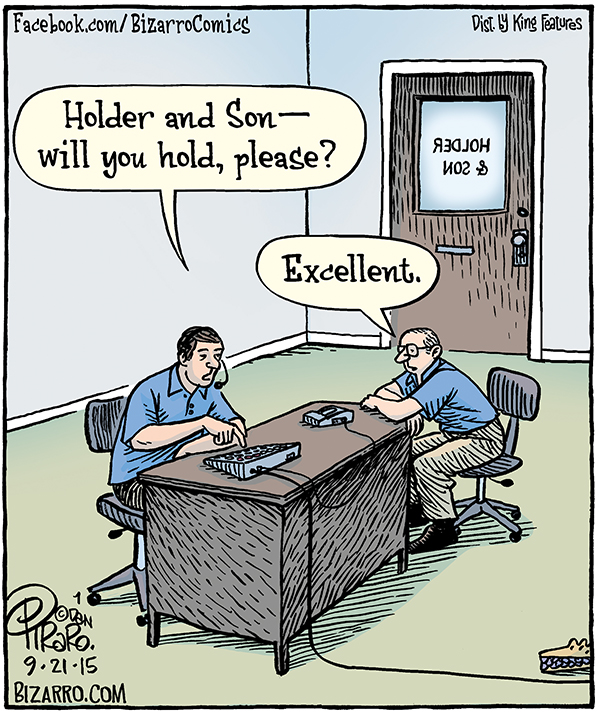 The weekday cartoons from last week looked exactly like the six that follow here. Holder and Son are still pissing off customers by keeping them on hold indefinitely. We’ve all called these guys before. 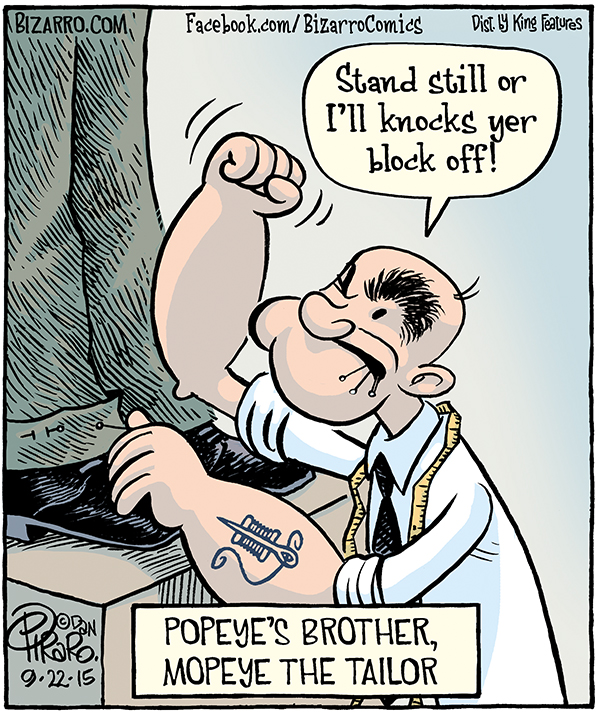 Mopeye the Tailor is hard at work threatening his customer very much the way his brother might. On a side note, when my first child was on her way and I didn’t know what its pronoun would be, I wanted to name the thing Popeye if it were a boy. The child’s mother steadfastly refused but I figured I’d call him that anyway. Who says both parents have to name their kid the same thing? She was a girl and so was the only other child I was directly responsible for so the controversy never materialized.  As some of you know, their names are Krapuzar and Krelspeth, and it is a wink to them when I put a “K2” in my cartoons. 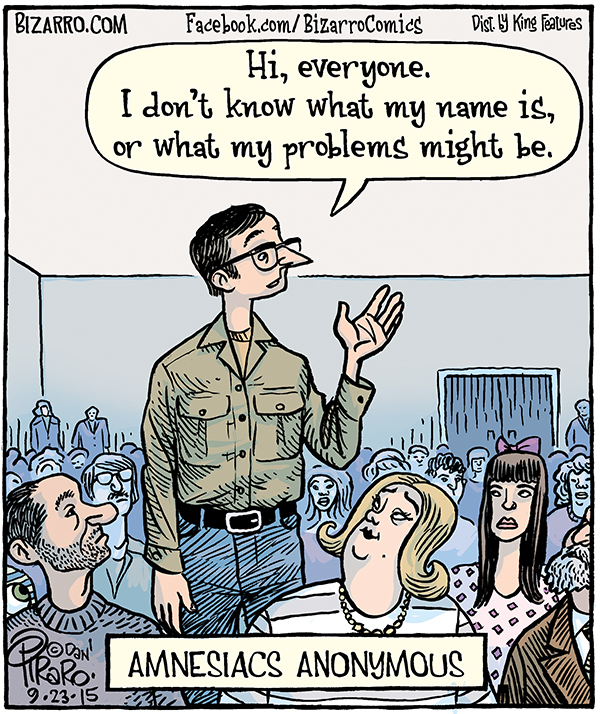 I think I accidentally published this cartoon twice in recent years. It’s the perfect one to do that to considering the subject matter. Guess I need to get back to my support group. 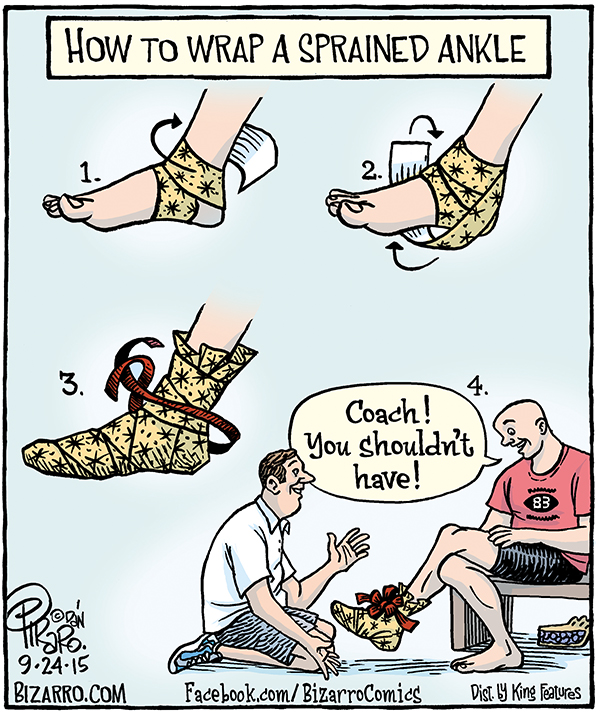 Back when I used to play a lot of tennis, I had a weak ankle that gave me a bit of trouble from time to time so I had to learn the proper way to wrap it. Years later, this cartoon sprouted from the experience. 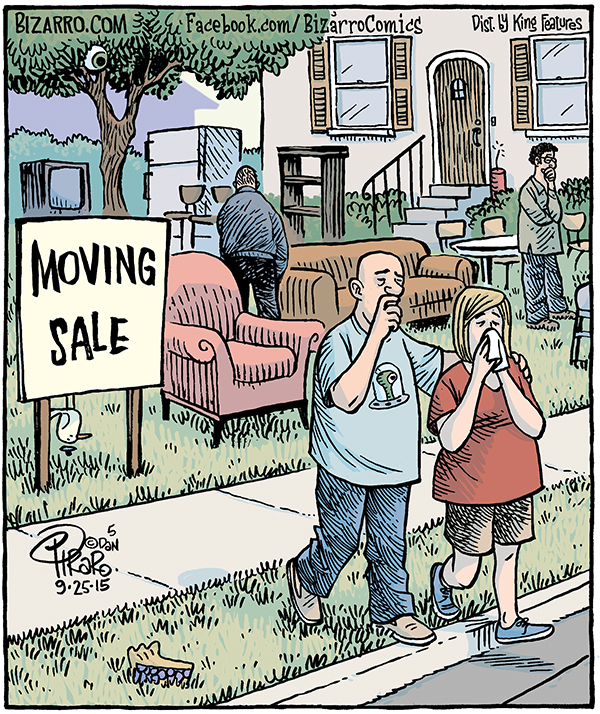 I got a few notes asking me to explain this one, which was completely expected because it is a bit tricky. The simple answer is that, as the sign predicts, they were (emotionally) moved by the sale. This pun was submitted by a reader and it took me a few beats to figure it out, too. But once I did, I laughed. Hope you did too. Many thanks to 71-year-old Rick Targow for the pun! 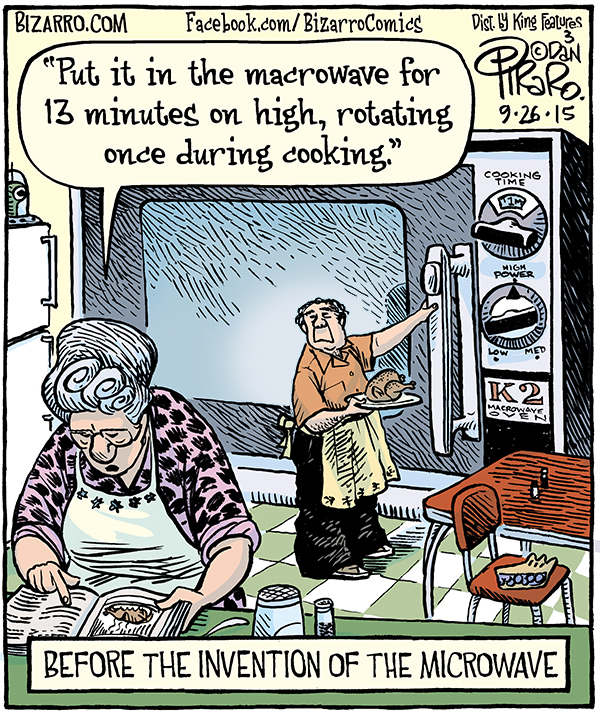 Our last cartoon this week is about macro vs. micro. Is it a big laugh or a small one? This idea sprung from the fact that back in the 60s or so, in the early days of computers, the most powerful computer in the world was about the size of a UPS truck and it had a capacity of something like 5MG of information. That’s smaller than a single cartoon of mine after it has been colored in Photoshop at the size and resolution King Features requires for publication.

Last thing: I’m appearing in a few hours at the Eugene Oregon downtown public library. I’m supposed to be doing a “talk” but I’m going to hijack it and turn it into a comedy show. Free, all ages, you will laugh at least once or you can take any book in the building home for free. (As long as you bring it back in two weeks.) Have a great week, Jazz Pickles!