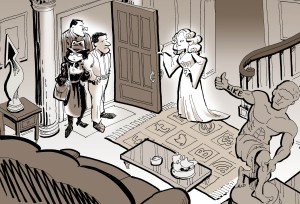 The Cartoon Museum in London has an exhibit spotlighting the 150th anniversary of Alice in Wonderland, through its depiction in comics.  I’m delighted and honored to be part of it, with the original artwork of the Fastrack Sunday strip of Sept 15, 2013.  It runs through November.

After several years of research I can definitely make the claim you see at the top of the page. “Kevin & Kell” is without doubt the longest-running continually updated daily webcomic, having never missed a scheduled upload in almost twenty years.