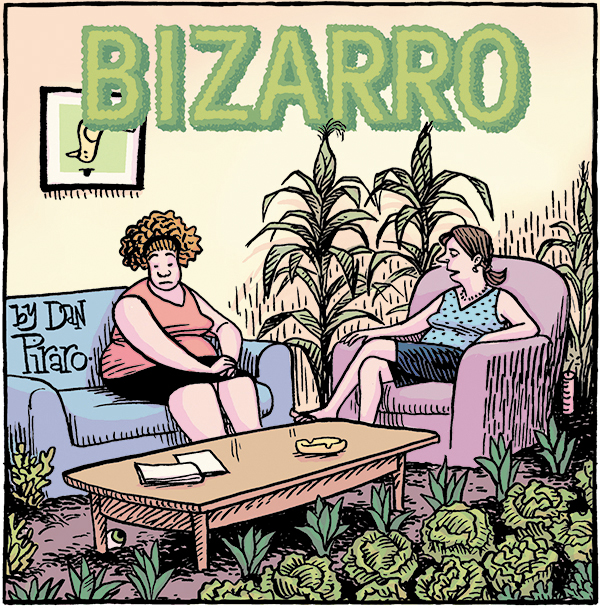 Strangely, this cartoon T-shirt of mine is back on sale until 8pm Pacific Time tonight. People kept ordering them, so they opened the campaign up again. So cool!

(To experience more largerness, click any bush on the cartoon below.)

Bizarro is brought to you today by Terror. 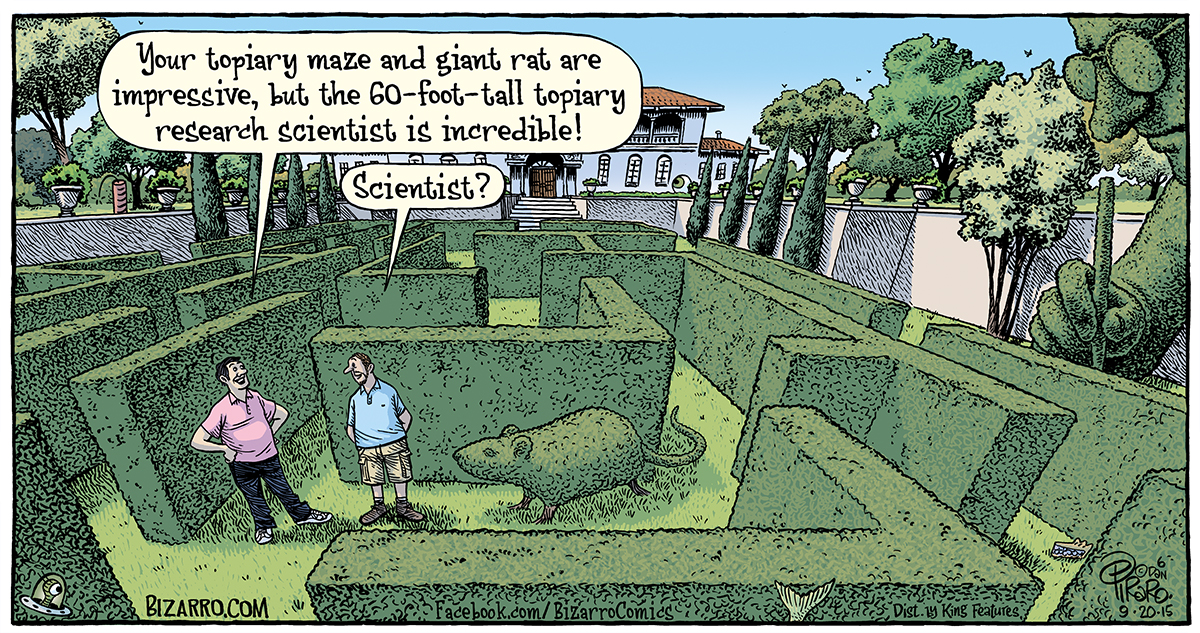 Here’s a bit of surreal fun for your Sunday. Not quite as surreal as Donald Trump being a front runner for the Republican nomination, but strange nonetheless. By the way, if you’ve not see the recent New Yorker cover illustration about the election, click this to see it now. I think it is a brilliant concept that perfectly illustrates certain factions of the American electorate. If you don’t quite get the joke, you’re likely not familiar with this photo and what happened in 1948 with major party presidential nominees Harry S Truman and Thomas Dewey. Dewey was well ahead in the polls on election day and a Chicago newspaper had the next day’s headline locked in and printed. But then Truman won. The NYker cover isn’t about the entire story, I think it is simply about the fact that America has become a place where people will vote for blowhard celebrities for president, instead of people who might actually do a good job. 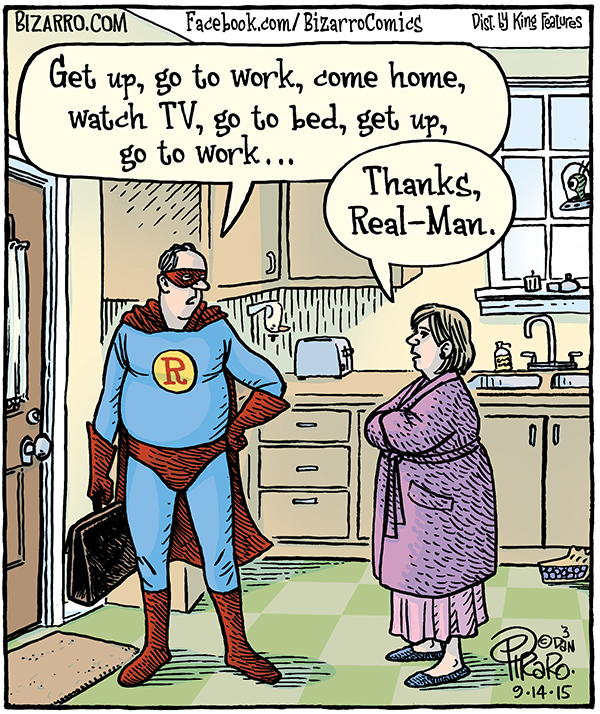 This cartoon is simply about what a drag “real” life can often be and how it takes heroic efforts on our parts just to wade through it. Yes, being a refugee escaping your war-torn country is infinitely more difficult, but dealing with decades of tedium can be rough, too. 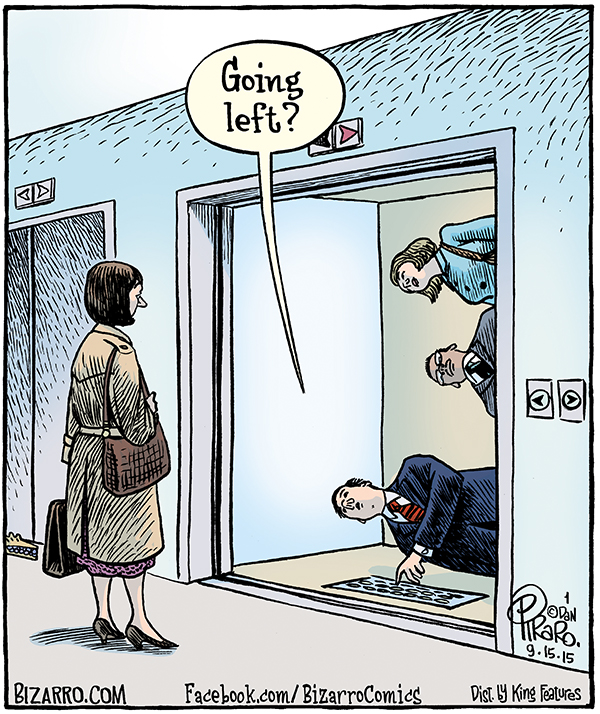 I got some nice comments on this simple, surreal twist on elevators. It made me happy. 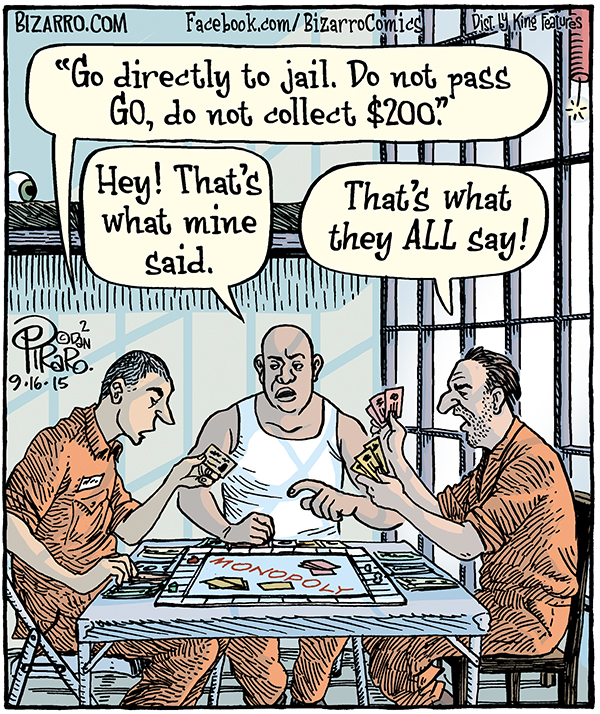 My good friend, Jon Kroll (one of the executive producers of that weird TV show I was on for a few months last year) really loved this Monopoly gag because he’s a big fan of board games. I wonder if there are jails anywhere that allow inmates to play Monopoly and if so, how many millions of times they’ve come across that card and laughed. Or cried, as the case may be. 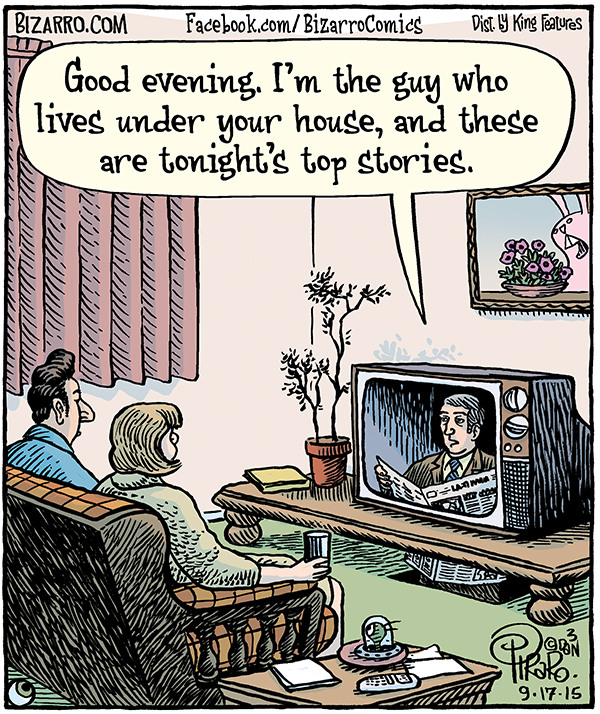 I’ve gotta say I really love this newscaster cartoon. It’s an example of my favorite kind of single-panel gag; it looks like one thing but turns out to be something else when you look more closely. It just occurred to me that the news guy looks a bit like Principal Skinner from The Simpsons, but that was unintentional. The dude on the couch is drawn a bit in the style of the late, great B. Kliban. Consider it a tribute. 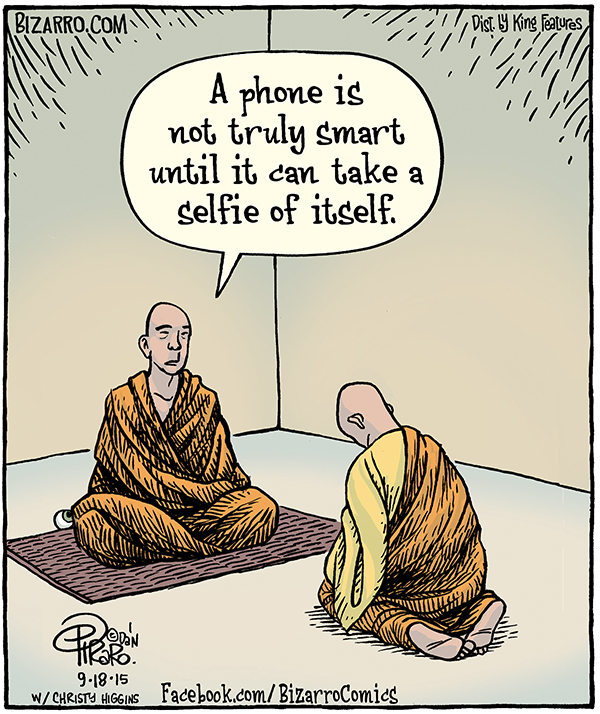 I’m proud to report that this zen/smartphone gag was the brainchild of my beloved Olive Oyl. I thought it was pretty great, hope you do, too. She and I are both fans of philosophy, so this kind of thing makes us giggle. 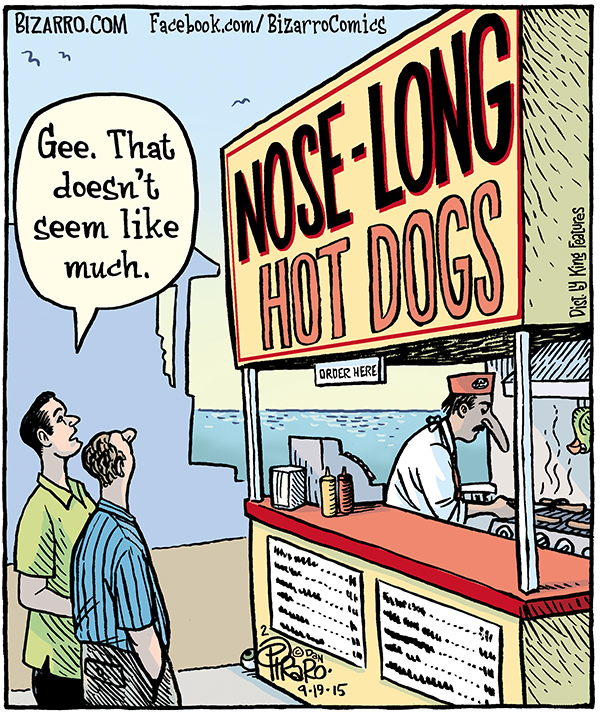 Once again I return to the rich comedy vein of footlong hot dogs. Here’s a favorite one of mine from 1997.

That’s the week that was, Jazz Pickles. I hope your week was stellar and next week will be even better. If you get a chance, check me out on Instagram @danpiraro. I post stuff there that I don’t put on my blog.