I think every one of us has happy memories of the toys we played with as children, or the toys we longed for in the store or catalog and never had.  I know have some very special ones, from my Lego castle set to the doll I carried everywhere (whose name was, creatively, “Dolly-dolly”), from my collections of paper dolls to my very favorite toy car, a tiny model of a Rolls Royce Grey Ghost with flame detailng on the sides.

This week, I asked our cartoonists to share memories of childhood toys!

I’ve been a huge Star Wars fan since I was a kid and I was so jealous when my younger brother got the millennium falcon and a bunch of the action figures for Christmas. I’m too old for the toys now, but I’m looking forward to seeing the new film. Sort of.

When I was a child in the early sixties, there weren’t nearly as many cool toys. At least, not that my parents could afford. I mostly played with tiny, plastic cowboys and Indians, and later Hotwheels cars. One of my early faves, however, was a Superman suit, which my mother procured via the 1960’s equivalent of the Internet: a mail order catalogue. I was about four when it arrived and I vividly remember as we were anxiously pulling it piece by piece out of its package and putting it on that it had a disclaimer printed on the shirttail that read something like, “Warning: This suit does not enable the wearer to fly.” I remember my mother reading it out loud and she and my father laughing. Meanwhile, inside my four-year-old mind, I was dealing with what was the first in a lifelong parade of bitter disappointments. I had honestly been hoping I’d be able to fly. Worse yet, when I wore it outside and began running around the neighborhood with my arms pointed rigidly out in front of me, an older kid with a BB gun stopped me and threatened to shoot me since Superman was impervious to bullets. I ran home as fast as I could (as close as I ever came to flying in that suit) and never wore it outside again. (sniff) 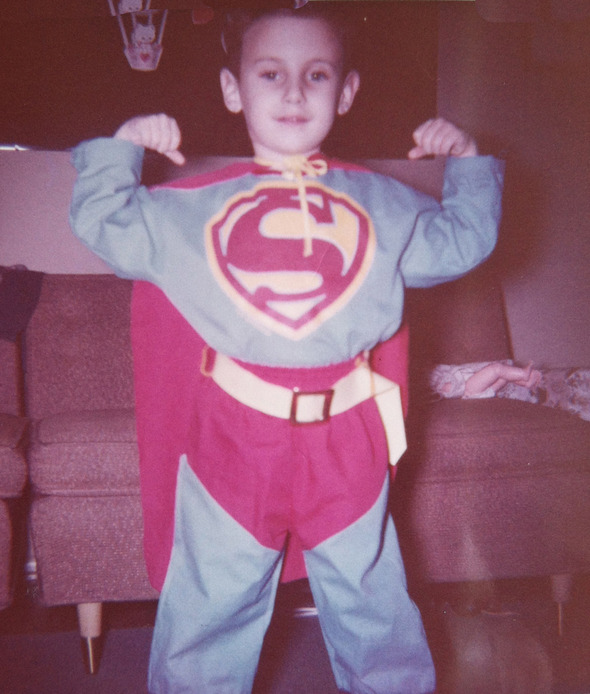 I played with all three of these toys as a kid.  I sent away for them from the Johnson-Smith catalog, advertised in the back pages of 1950s comic books.  I resisted buying the Whoopee Cushion, but I did get the Exploding Can
of Peanuts.

Major Matt Mason! He was an astronaut. My favorite toy for sure. 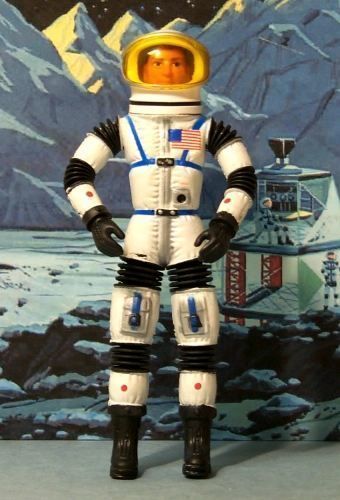 This push top toy was a favorite. 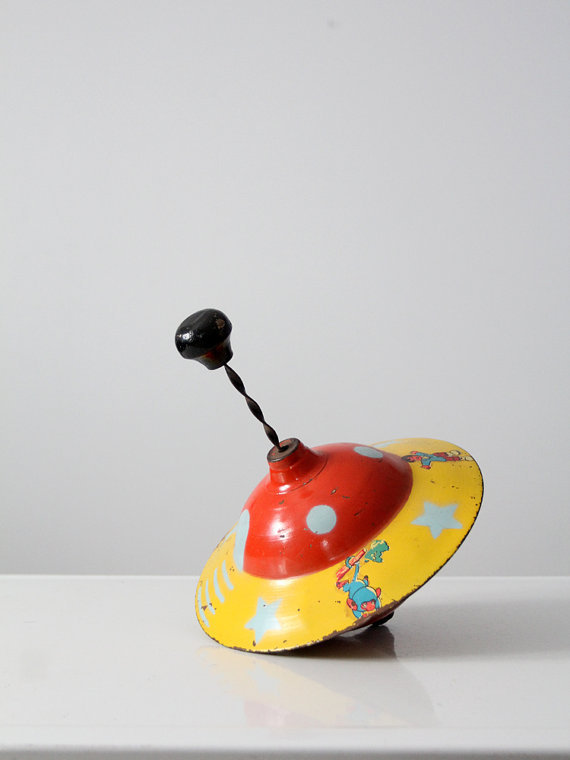 I still enjoy it, but now in its guise as salad spinner. 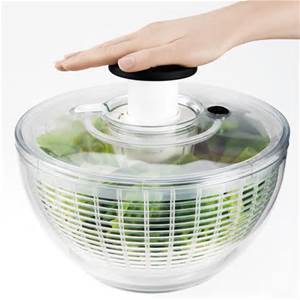 As a kid in the 1960’s, my absolute favorite toys were my monster and super hero model kits. The Aurora Plastics company had noticed the popularity of the classic movie monsters among the younger set, and produced a series of kits based on the Universal Studios monsters (Frankenstein, Dracula, etc.). The kits were a huge success, and were followed up by super hero character model kits from both DC (Superman, Batman) and Marvel (Capt. America, Spider-man). Competitor Revell, noticed Aurora’s success with figure kits, and released a number of their own. A friend of mine had Revell’s Beatles kits, but I never got those (as much as I wanted them). I did get the two multi-character comic strip hero kits they produced — King Features’ “Flash Gordon and the Martian” and “The Phantom and the Witch Doctor.”

Of course, being a kid, my model building and painting skills left something to be desired, and as much I loved the things, I could never quite make them look like I wanted them to look. That would have to wait until I rediscovered them as a adult. For some years now, I have been reassembling the collection of kits I had as a kid (but trashed when I got “too old” for them) — even adding ones I never had (Beatles!). I recently painted two sets of Phantom and Witch Doctor. I kept one set for myself and donated the other to a charity auction at a Phantom-fan dinner in Australia. Here’s a picture of the “twin” model kits — Maybe the only sets painted by an artist of the Phantom comic strip! 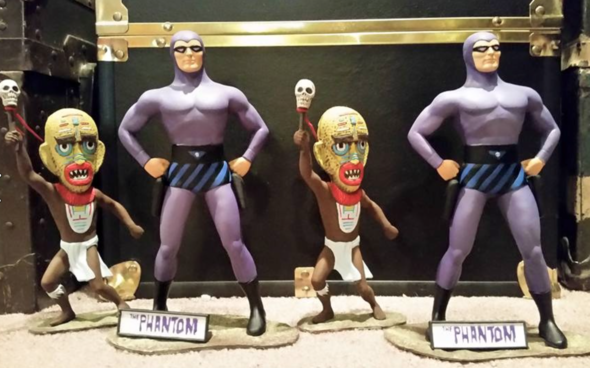 Two favorite toys from my childhood immediately come to mind.  And neither one was store-bought.  We lived in many small towns when I was very young, so there were not a lot of places to shop.  I wanted a ventriloquist doll one year for Christmas and my mom and dad could not find one anywhere when shopping.  In fact, they even told me not to even expect it under the tree.  But since they knew it was high on my list, they asked around the neighborhood and found a neighbor with a used Danny O’Day ventriloquist doll.  They bought the used one and I could not have been more excited that Christmas morning.  The second toy was a handmade stuffed animal.  I was a big fan of Disney’s Winnie The Pooh movies and books as a small child and my mom decided to make me a Winnie The Pooh stuffed animal.   My mom is not a professional seamstress by any means, but she found some material that was the proper style and color and constructed a perfect Winnie The Pooh for me!  I was thrilled!  In fact, I kept that silly ol’ bear until I was an adult when it finally dry rotted.  My brothers and I are bodaciously blessed with such wonderful parents.

I can’t really remember any ‘certain’ toy that I ever played with as a child. My mother told the story that I was the easiest child to shop for because all I wanted for holidays and birthday was drawing supplies. My brother and sister are older than me by years so there were no fights over toys either.

However, I was crazy about Hot Wheels. I’m not sure but I think they were just making their debut. And so was I. When I was twelve I began selling artwork on a regular basis. I would use a portion of each paycheck to buy a new Hot Wheels. Mind you, this was in the late 60’s. I was crazy about cars, models and real cars! I still have these cars, packed away in a closet, in their original carrying case. Before you ask, no, they are not in the plastic coverings. I did play with those cars. I even took them to racing competitions, that at the time, major departments were sponsoring. My Jack Rabbit Special won a certificate for being fast. I spent a lot of paychecks on them because there are a lot of them!

In early elementary school I would construct kit models of dragster monsters known collectively as Weird-Ohs. (Yes, a cartoonist’s sensibility starts early.) Thank you, Internet, for enabling me to find a photo online. 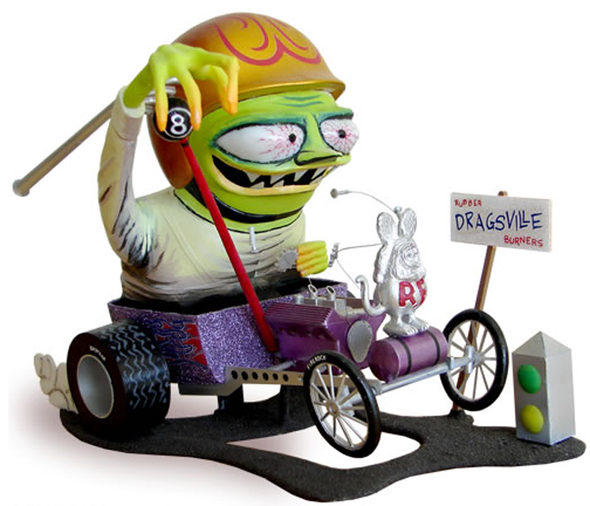 No contest. Legos! And here’s a strip for Legos parents. 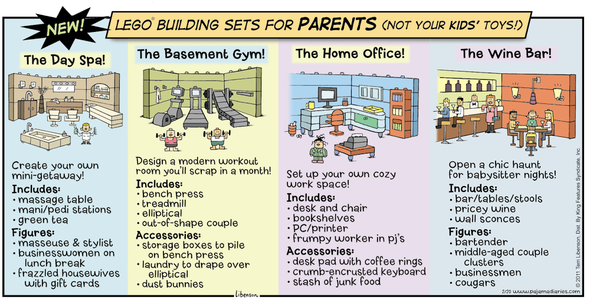 My hands down favorite toy in the 60’s (although I was already a young teen) were the Remco Beatle dolls. Originally, they were about 2 bucks each, but I paid considerably more for these near mint specimens on ebay.  lol! 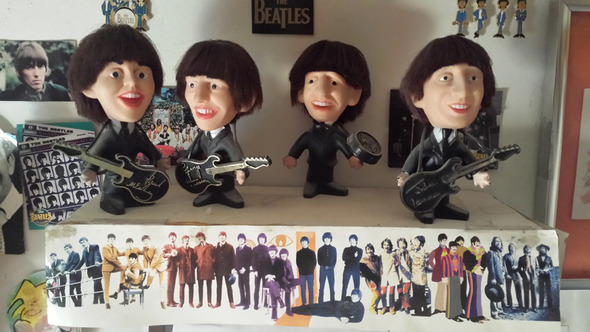