Mother of All In Laws 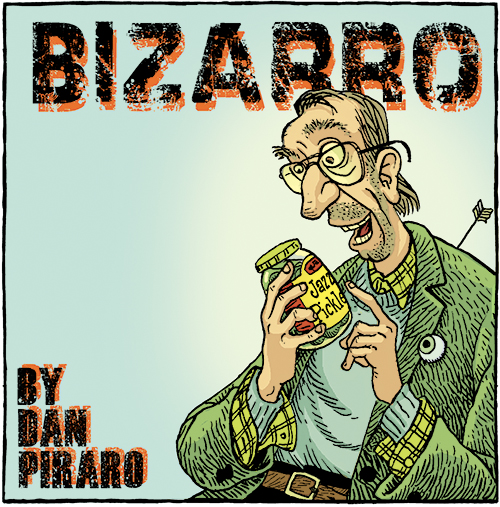 (To view an embiggenated version of the cartoon below, click the dog’s nose.)

Bizarro is brought to you today by Clash of the Water Things. 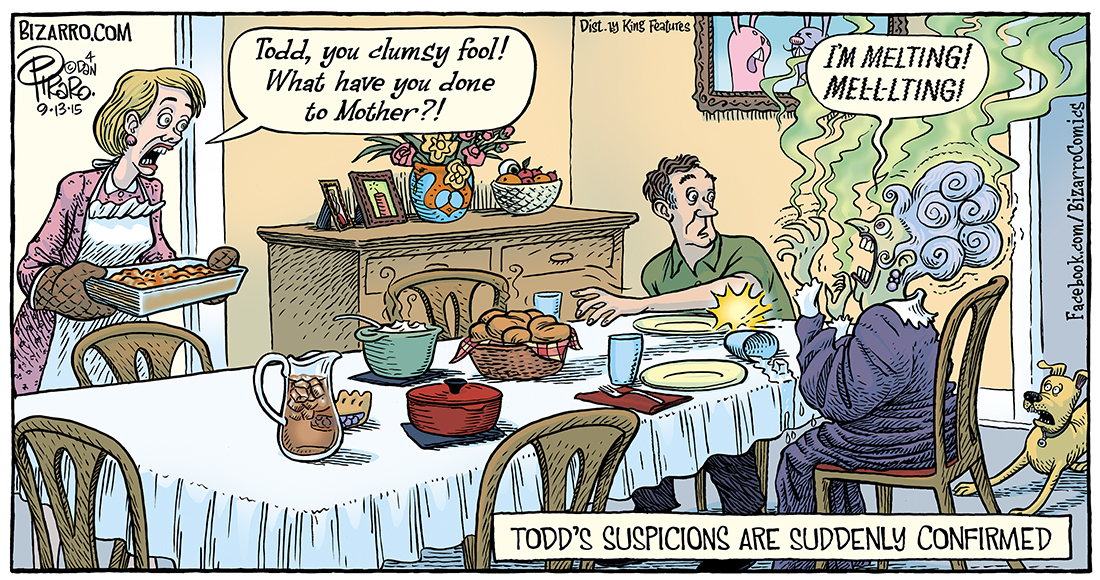 It seems I’ve been doing a lot of cartoons related to the Wizard of Oz movie lately and the one above is no exception. No idea why, the mind has it’s own secret agenda sometimes. This one’s about how the Wicked Witch of the West melted when somebody or other (the Cowardly Lion?) accidentally threw water on her. I’ve had two mothers-in-law in my life and though one was infinitely more tolerable than the other, I had good and bad experiences with both. The mother-in-law relationship can be a bit tricky, for some reason, so if you’ve got a good one, thank whatever or whomever it is you thank for such things. 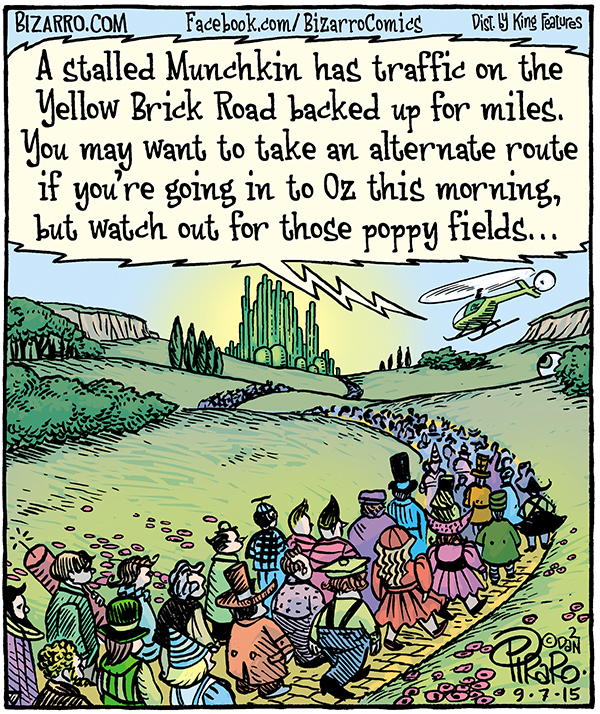 Remember what I said in the previous paragraph about the Wizard of Oz? It’s still true. Hey, do you remember in the movie how the Wicked Witch made Dorothy and the dudes fall asleep in a poppy field? Has it ever occurred to you that poppies are used to make opium? Was that a drug reference? Does this cartoon include a drug reference? 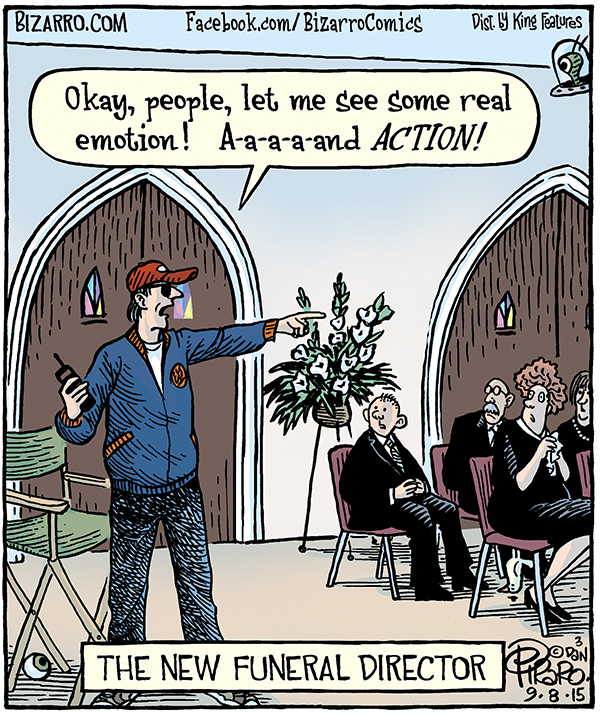 This cartoon is about how film directors typically behave as opposed to how funeral directors typically behave. But then, if you have a three-digit I.Q., you already knew that. Generally speaking, funerals are not funny and I apologize if you’ve been to one recently. Like many humans throughout history, I use this kind of humor to lighten my own emotional pain surrounding the tougher issues we all face. 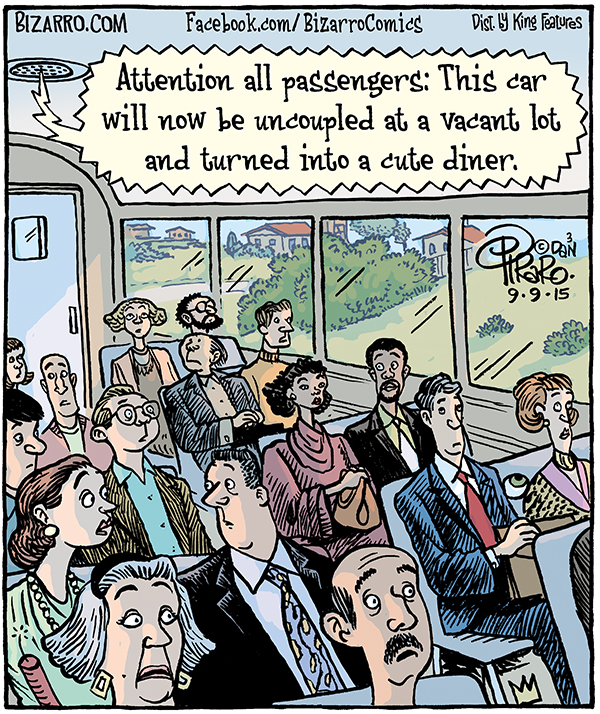 Lately I’ve been dabbling in more surreal ideas that don’t necessarily relate to people’s real life experiences. This one about the train car diner is kind of in that direction and the next one definitely is. 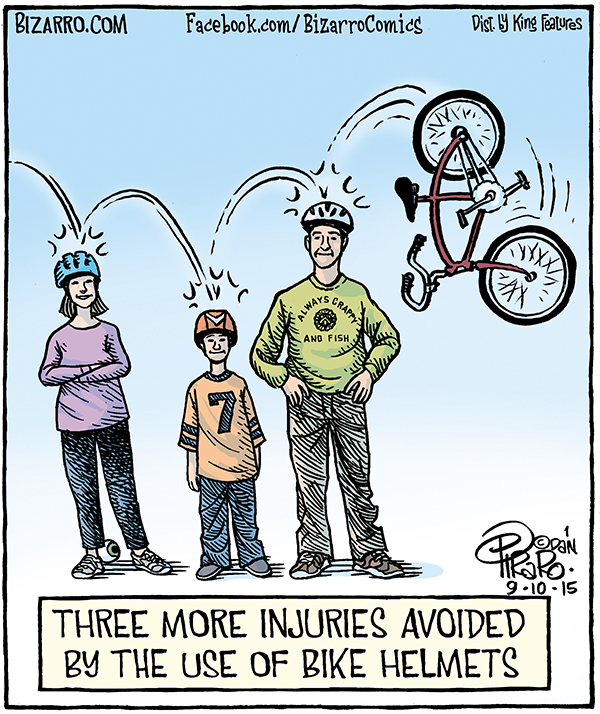 I’ve always liked playing with word meanings. If you somehow had no idea what the chief purpose of a bike helmet was, you might wonder whether it was to protect you in case you fell off of a bike or in case a bike was thrown at your head. In such cases, crash helmet is a more descriptive term. (Here’s a life hack that I came up with years ago and has saved me untold misery: wear a bike helmet when you’re messing around in crawl spaces or attics; anywhere that you might bang your head on rafters.) 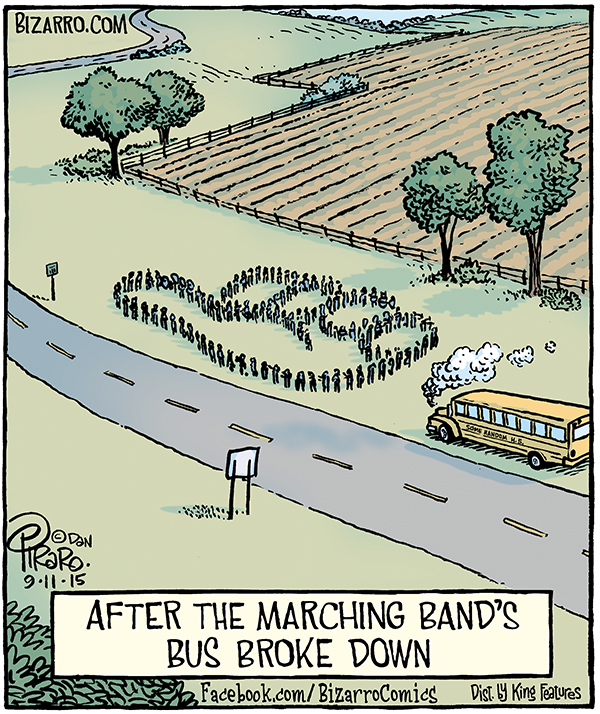 I’ve always wondered how the hell people coordinate elaborate marching band sequences and convey the info to the players. One of these days I’ll have to google that. 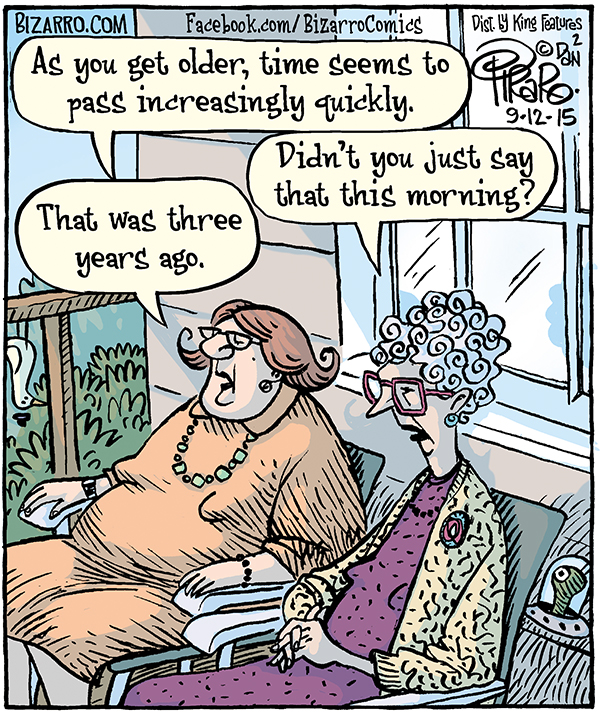 Not only is this last cartoon not funny, it depresses me. I can’t believe how exponentially fast time is passing and I’m only in my mid-fifties. At this rate, I’ll be 85 in what seems like a few hours from now. Geez.

Have a great week, Jazz Pickles. Two weeks from now I’ll be doing a talk at the public library in Eugene, Oregon, so come see me if you’re in the area. It’s free, I’m funny, all ages are welcome and if I don’t have a good-sized crowd, my sensitive, artsy feelings will be crushed like a rice cracker under the wheels of a Hummer.