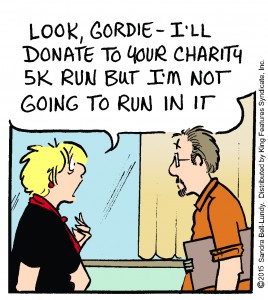 On Monday, Sept. 14, I’ll be featuring a special two-week series that I wrote for one of my very good friends and her family.

For the past few years, I have been assisting the Lincoln County Humane Society with their yearly fundraiser. I donate through auctioning off a name-mention in Between Friends and also give the winning bidder the original art.

This year, my friend and her sister (who is the organizer of the event) won the bid. They asked me to put the name of their brother, Gord in my strip. (I didn’t know they were bidding to win the name-mention…if I knew, I would have told them I would have done the name-mention for them anyway) Gord passed away last April after a ten-year battle with a brain tumor.

Rather than just put Gord’s name in my strip, I wrote a fictional, humorous two-week series featuring Gord as Susan’s co-worker. He’s trying to coerce Susan to participate in his annual Charity 5k Run. Susan is not enthused.

As I said…I’m no caricaturist but I tried to capture Gord by drawing him with his signature glasses and goatee. He also consistently supported the Rankin Cancer Run and was a director on the Dollywood Foundation which is why I had his alter-ego trying to fund-raise for charity. I also wanted to show how determined he was and how he wouldn’t take no for an answer when he set his mind to something. (A characteristic familiar to him AND his eight siblings!) And finally, I wanted to incorporate the essence of his kind spirit.

My friend and her sister have kept this series a surprise from the rest of their extended family. So they’re going to be surprised when the series begins on Monday…unless any of them read this blog.

Gord was married with three children…two in high school and one in university. The youngest is a comics fan. I hope the series brings a smile to her and to all the rest of the family.