Today, after more than six decades, Mort Walker’s creation, “Beetle Bailey” is still one of the most popular comic strips in the world. Beetle Bailey started as a college-themed strip and debuted inauspiciously in 12 newspapers on September 4, 1950. After six months, it had signed on only 25 clients, and King Features Syndicate considered dropping it. The Korean War was heating up at that time, so Mort Walker decided to have Beetle enlist in the Army.  He quickly picked up 100 newspapers. From 1954 to 1968, the circulation of Beetle Bailey grew from 200 newspapers to 1,100, and many new characters were added to the cast. The rest, as they say, is history!

Pros & Cons by cartoonist Kieran Meehan focuses on five characters and three professions. Samuel Rhodes, a defense lawyer, Gillian Jaggers, the District Attorney, Lyndon Peel, a psychiatrist and Stan Defoe, a cop, strive heroically to balance professional ethics with human frailties. When the competition and stress becomes too great, they withdraw to a haven of calm called Defoe’s Diner. Owned by Sophie Defoe, Stan’s sister, her diner is the closest thing any of them have to a neutral zone.

Speaking of “Beetle Bailey,” Brian Walker posts vintage comics from the 1952 furlough story currently in progress on the BeetleBailey.com blog.

Over at HiandLois.com, Brian Walker reminisces about the late and legendary cartoonist Dik Browne. 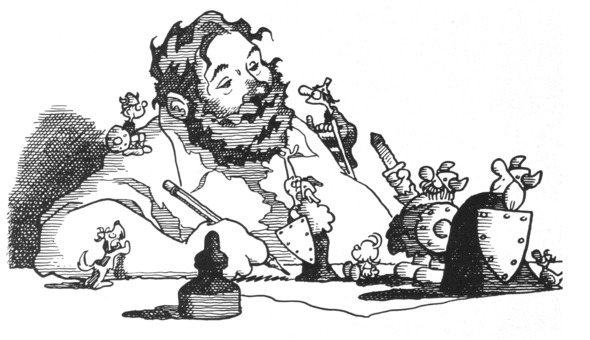 Dan Piraro (“Bizarro”) shares a week’s worth of cartoons and offers insights into what inspired them.

Have a great week. See you next Friday!