I mean, I’m sure that between students going back to school, folks starting to get ready for the winter, leaf-raking, and all the other things that come along with September, we all also have time for self-improvement, right?  RIGHT?

In the spirit of finding a way, I’ve asked all of our cartoonists to share THEIR tips for self-improvement! 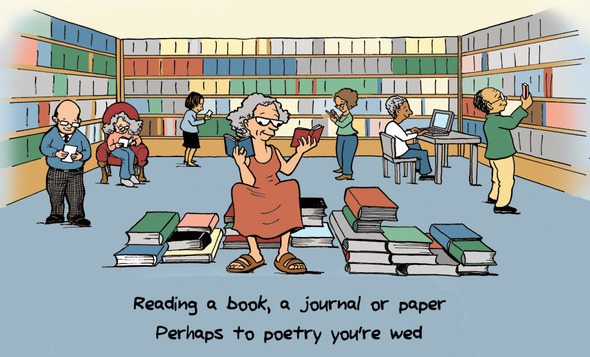 My personal self improvement thing these days is to exercise every day, even if it’s something really small, like walking to do an errand instead of driving.  I just illustrated a book on self improvement which you can find here!

Oh, and here’s my two cents for any aspiring cartoonist who wants to improve: PRACTICE. It’s like slam-dunking basketballs, throwing darts, or playing piano… the more you do a thing, the more you improve at that thing, whatever it may be. I can’t tell you how many young cartoonists seem disappointed at hearing me say that, but the truth is, if you don’t draw and write on a regular and frequent basis, then you won’t see much progress. So do your “scales” every day, folks!

When I first came to New York I didn’t know anyone. I went to a cartoonist meeting and was immediately welcomed by famous Milton Caniff and Rube Golberg. They had seen some of the first issues of Beetle Bailey and liked it very much but had a few suggestions. Milton thought I shouldn’t draw real jeeps or tanks. He thought I should draw cartoon impressions of the weapons the Army used. Rube thought I should get lots of funny pictures instead of the characters sitting around talking. And I should have lots of fight scenes. Most of the strips those day like Krazy Kat, Popeye, Moon Mullins, etc. had fight scenes almost daily. Now I’m getting a few fan letters objecting to Sarge and Beetle fighting and I’m trying to change it to a “sport.”

Legendary King Features Comics Editor, Jay Kennedy, emailed me in 2006 to say that he liked my drawing and humor, but that my lettering was sloppy. I got that into shape and he syndicated me, so that was useful advice! These days, I advise all budding cartoonists to publish online (Facebook, Twitter, ComicsSherpa, WordPress, or wherever) and get used to meeting those deadlines. The feedback you get from readers is invaluable when starting out and now, for me, 8 years since Arctic Circle was released to the world.

I teach comics every year at the School of Visual Arts in New York (229 E. 23rd St.).
it’s a 30-class  two semester course, 3 hours each class, mostly  sophomores.
In it, I try to impart everything I’ve learned about how to create comics.
I’ve reduced all this wisdom  to my “Top 40” list.   Here are a couple of highlights:

7) The best laugh is the one the reader’s been unknowingly waiting for.

17) If you use written text above the drawing in a panel or a series of panels, don’t make it “explanatory”. Better to use it to complement the drawing, not describe the drawing.

23) Comics can tell any kind of story. It’s an infinitely flexible medium.
Comics will never disappear. New media (and new delivery platforms) do not necessarily replace existing media. New forms free up existing forms, allowing them to do more interesting, less commercially-driven things. Web comics aren’t the only future of comics. Print and web comics will both continue to exist, side by side. Until we’re all replaced by robots.

40) Last but not least: never listen to anyone else’s advice on cartooning.

Sometimes, trying to think positively can lead to mixed results! 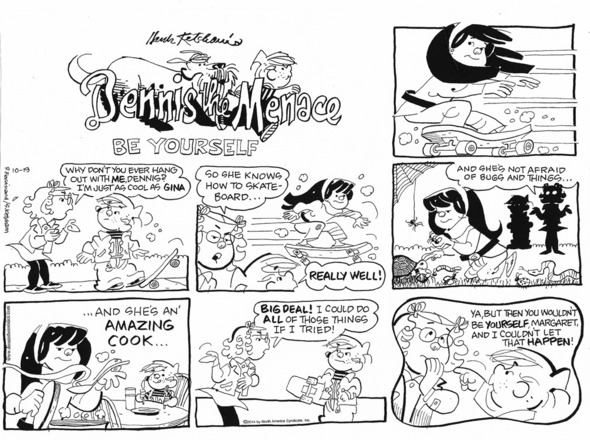 Margaret’s attempt at self-improvement seems to have come to naught.  lol! 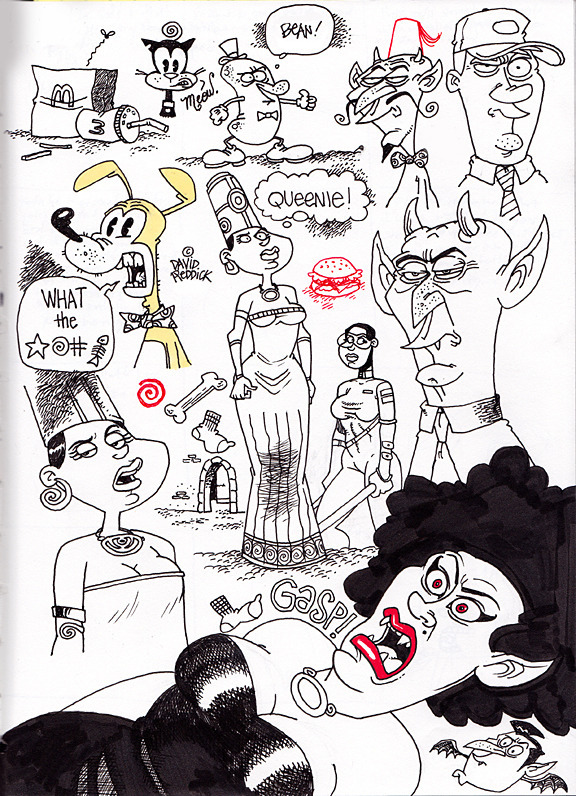 For my own cartooning self-improvement, I am in a constant state of doodling in my sketchbook. I have to do it. That’s the tip I’d give any cartoonist starting out… work on writing, yes… develop characters or scenarios or your world, yes… but draw. Doodle. Sketch. From life. From imagination. Practice. Have fun with it. Keep a sketchbook. A sketchbook keeps you fresh, lively, and reminds you to love it, and never to make it work. A sketchbook keeps you in touch with your free-thinking, boundless inner child. Sketching and random, free-form doodling for me is a form of meditation, and brings me into the moment. It constantly reminds me why I love cartooning.

I pretty much learned cartooning on my own. No tips. But one thing I learned very early on was this. If you’re just starting to cartoon, you’re going to be bad at it. If you don’t realize that you’re bad, the chances are that you’ll never improve much. You may copy someone’s style, and that might look ok. But I don’t think much of copycats. 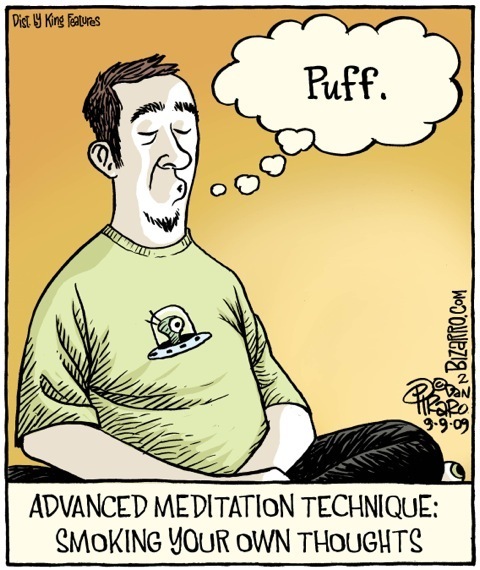 Around the first of this year I quit smoking cigars. I started smoking them around ten years ago when I was in Costa Rica and they were cheap and plentiful. I meant to keep it as a once-a-week kind of habit but bit by bit over the years I smoked more and more and for the past three years I had been burning six to eight cigars a day. Cigars aren’t cheap and this cherished pastime had become more expensive than my heroin habit, so it had to go.

For anyone else wanting to quit, I used a book called “Allen Carr’s Easy Way to Stop Smoking”. My son-in-law had successfully used it years ago so I gave it a shot. It’s a very poorly written book and the important stuff could easily fit into a pamphlet, but the basic psychology of it was very useful to me and I was able to manage it. I’m not saying I wasn’t an unmitigated, irritable jackass for a few weeks, but I succeeded.

Another thing that helped was that at around the same time, I committed to 20 minutes of meditation each day, no exceptions. I highly recommend this for anyone as the current brain science behind it is very positive. I’ve been doing it for months now and I am finding life less frustrating, I’m more calm, and I may even be developing the ability to move things with my mind. (Still a theory, I’ll keep you updated.) Oddly enough, I drew this smoking/mediation combo cartoon way back in 2009, when I had no intention of ever stopping my cigar habit. 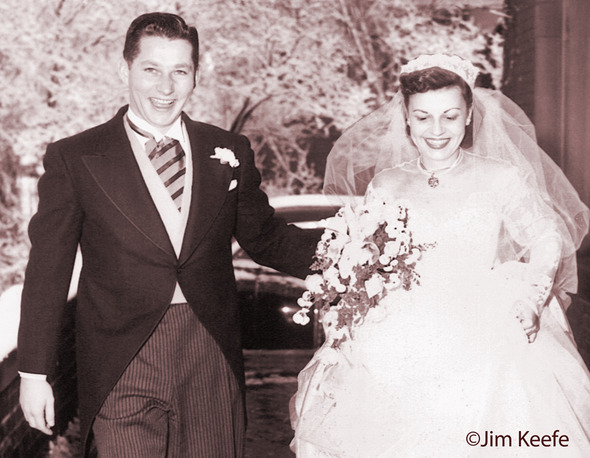 The best advice I’ve gotten was from my parents. When I was just out of high school in Minnesota, and trying to pursue cartooning as a career, the first few schools I went to were geared more towards fine art so I left after a semester. Since the schools weren’t the right fit for me my parents fully supported my decision, but stressed to keep looking for the right school and get an education – not just sit on my ass. That lead me to the Joe Kubert School out east, which lead me to a career.

The pic I’ve attached is from my parents’ wedding back in 1953.

Thanks Mom and Dad!

Got this good advice this weekend reading Ivan Brunetti’s Cartooning: Philosophy and Practice