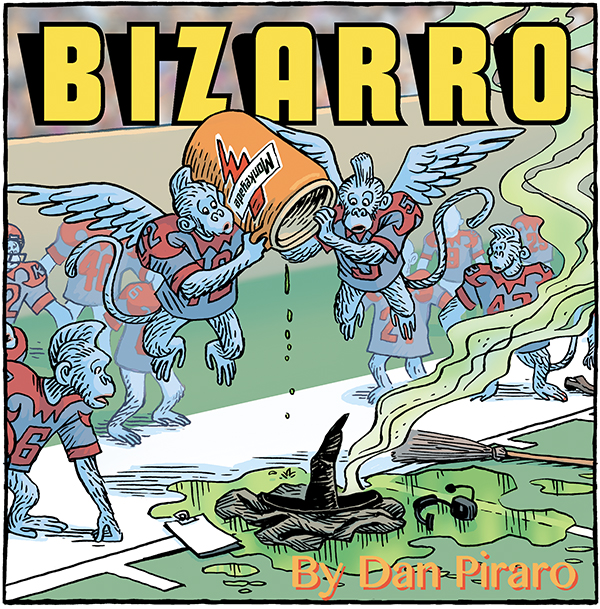 (For the making of biggerized pictures, click them with the thingy.)

Bizarro is brought to you today by Where Did I Put My Keys? 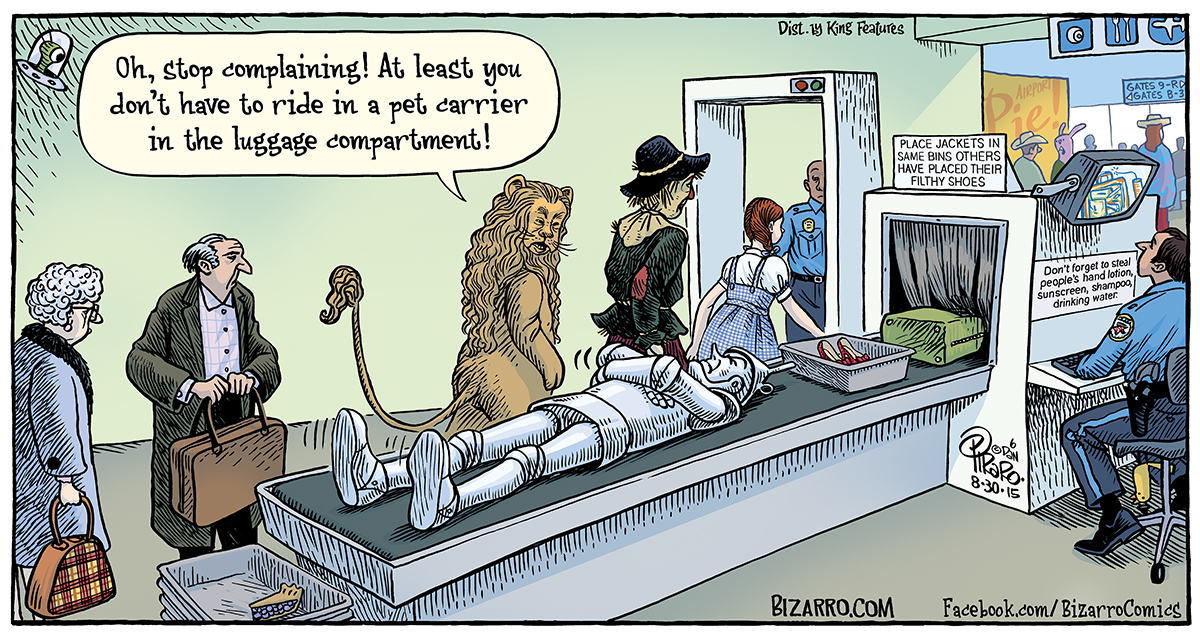 Since I hate the TSA security protocols at airports so much (and commercial airlines themselves, come to think of it) I really like this gag. Three of my favorite things about it are the ancillary gags, however. The two signs near the X-ray machine and the “secret symbol” on the X-ray screen itself. Click the image to view it larger and you’ll be able to see this stuff. I also really love the title panel, which is a small part of an old Sunday cartoon I did in 2009 in collaboration with a buddy of mine, Victor Rivera.

And now, the week’s rundown… 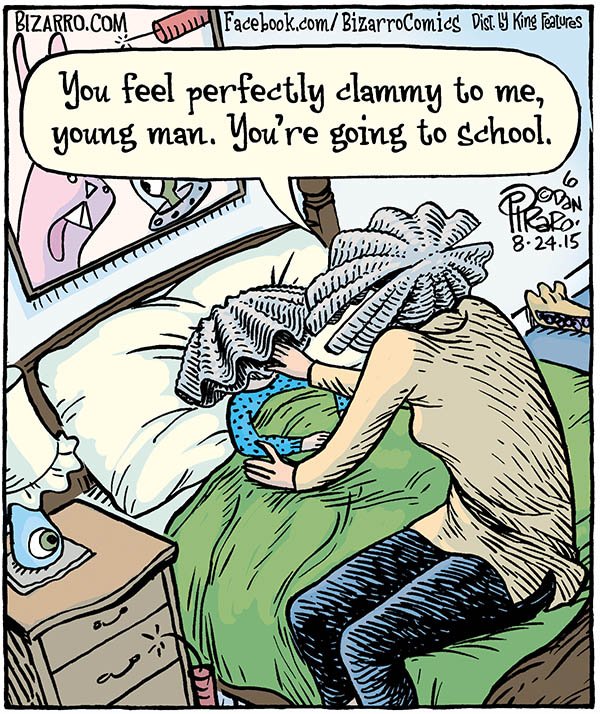 Monday’s comic has us revisiting that familiar childhood situation of trying to convince your mom you’re too sick to go to school. This clammy little fellow is striking out. 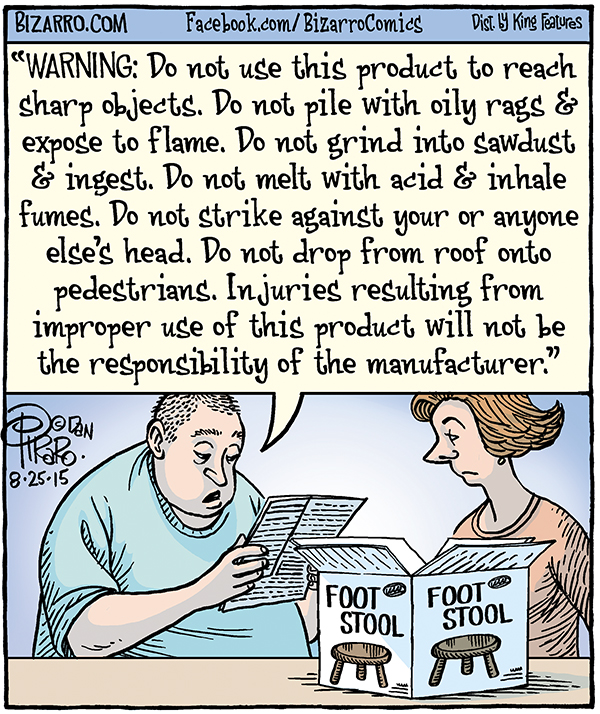 A week doesn’t go by that I don’t find myself irritated by the absurd legal culture of the U.S.  Virtually everyone doing business here lives in fear of being sued over the stupidest things and so must go to ludicrous and childish lengths to protect themselves. The result is that there is so much superfluous information that few people bother to wade through the idiocy to find the stuff they might actually need to know.

I got an angry email from a reader about this “explosive” cartoon. She was concerned that with all the terrorism and violence in the world, this cartoon was a bad influence on children. I’m not sure how that equates but my inspiration for this cartoon wasn’t terrorism but rather the hot temper I inherited from my father. When we were younger, we were both prone to launch into irrational, narcissistic rages from time to time. Maturity and anti-depressants eventually (all but) cured us, I’m happy to say. Although my partner, Olive Oyl, can attest to the fact that I can still be a real asshole now and then.

I actually expected to get a bit of bad mail about this capital punishment gag but I did not. By the way, I’m against capital punishment, not because I believe that everyone has a right to live but because I think it holds violence up as an official and sanctioned solution to certain problems. I suspect living under a government that sanctions violence breeds more violence on the personal level by its citizens. I’d like to read more about both sides of this philosophy before making up my mind for good, however. 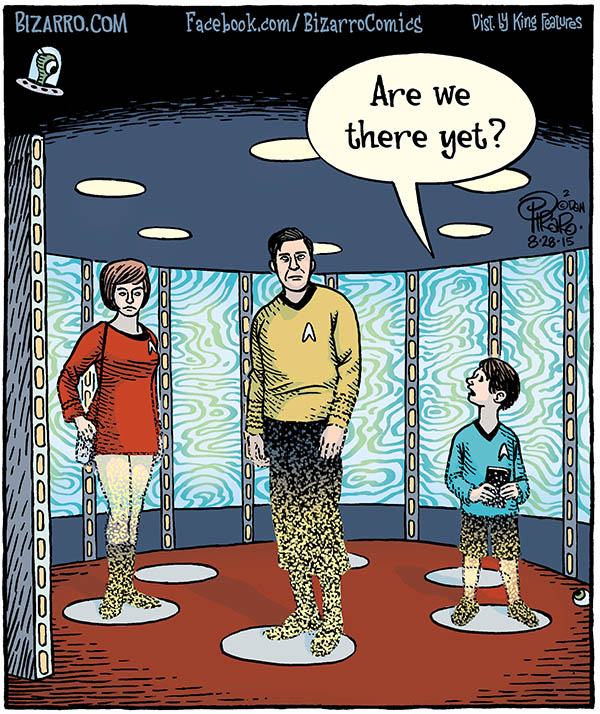 I’m quite happy with this Star Trek gag. “Are we there yet” cartoons are pretty common so it’s fun to find a new and clever way to present it. Here’s the other favorite gag of mine in this category. 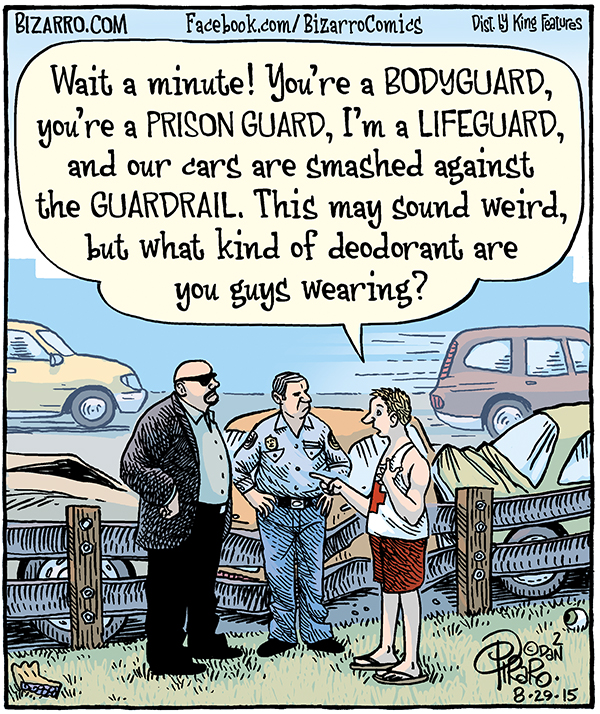 If you don’t get this last gag of the week, it is likely because you’ve never heard of or your mind is not recalling Right Guard antiperspirant.

Thanks for reading, Jazz Pickles. Hope you have a terrific week ahead!