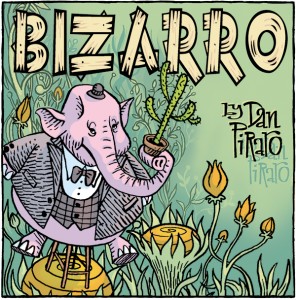 Bizarro is brought to you today by Future Fashion Trends of the Universe. 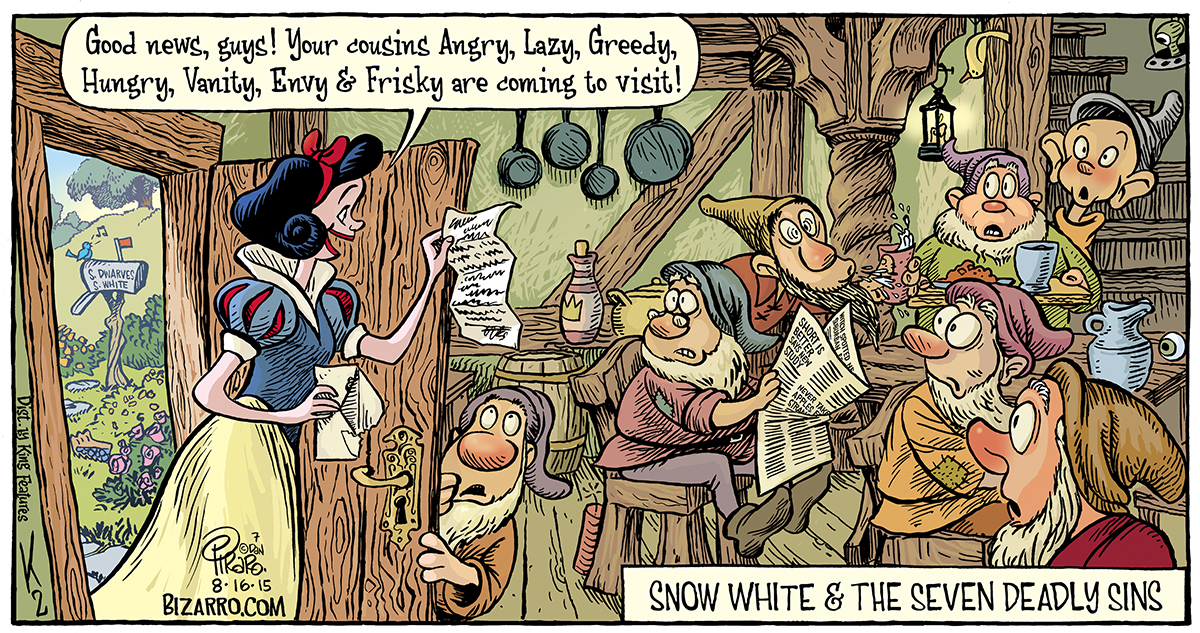 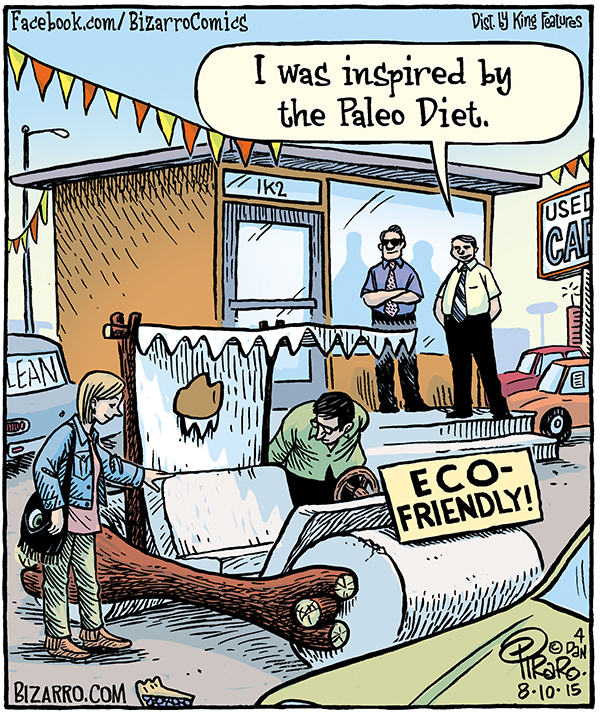 Following is last week’s roundup, starting with this cartoon about the ultra eco-friendly Flintstone mobile. It is said that everything comes back into style eventually and the way our little life raft’s climate is changing, we may all be living in the Stone Age again one day. 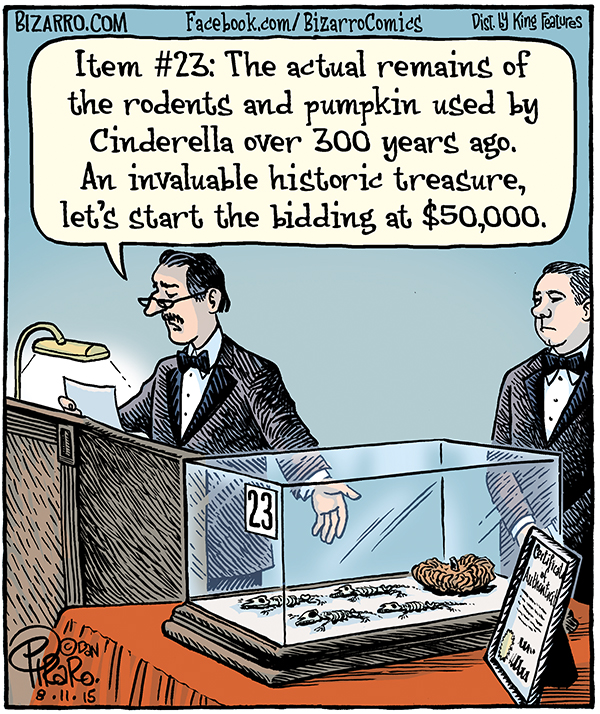 This cartoon about an auction house harkens back to another famous Disney animated film, Cinderella. You may recall that her carriage on that magical night was made from a pumpkin and the horses that pulled it were rats or mice. Memory fails. 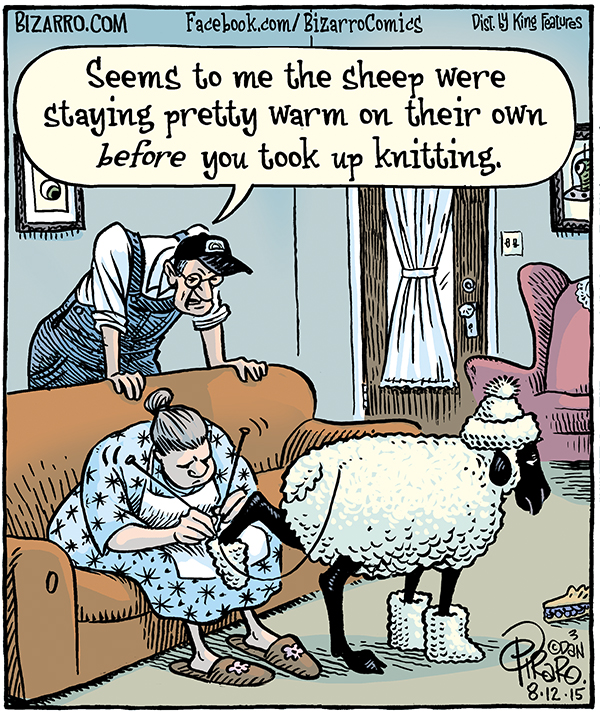 I’m no more certain of what this sheep cartoon means than you probably are, so I’ll just let it sit and be whatever you want it to be. 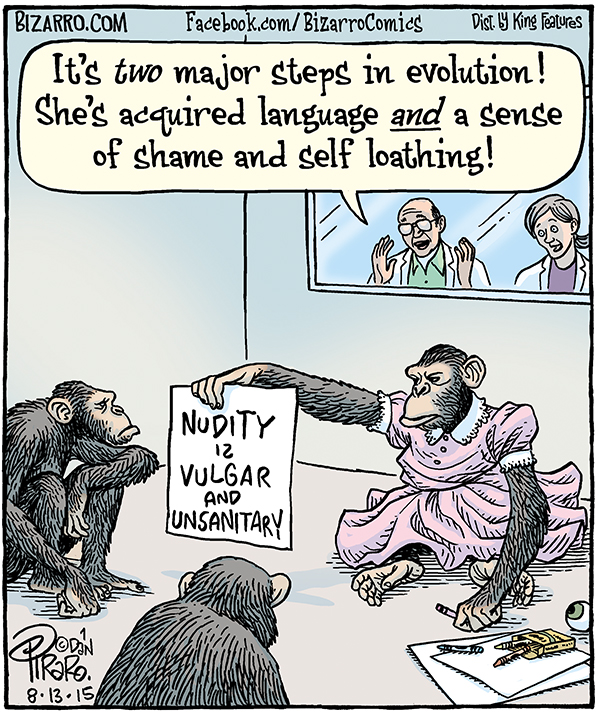 Since I was a child I’ve questioned our species’ shame over our bodies. Don’t get me wrong, I’m not a nudist and am just as vulnerable to feelings of embarrassment about such things as the average person because that’s the way I was raised, but I am able to intellectually see the ridiculousness of it. To me, it is clearly an attempt to control our sexuality, which became more important around 10,000 years ago when agriculture was invented and people began “owning” things and thus wanting to pass them down to their own offspring. I’m convinced that before that humans were much more liberal sexually, which is closer to our biological nature. That’s why monogamy is so difficult for most of us. For more fascinating info on this kind of thing, read “Sex at Dawn” by Christopher Ryan.

This is a simple turn-around joke but I still really like it. A “lap dog” could either be one that sits on your lap or one that has a lap you could sit on. In the bottom corner you’ll notice a birthday message to my lovely life partner, Olive Oyl. I did that because it was her birthday. Since we are both motorcycle enthusiasts, we took a ride on our bikes to a small, SoCal town and spent the night in a campy old motel that has been renovated for hipsters like us. It was fun. 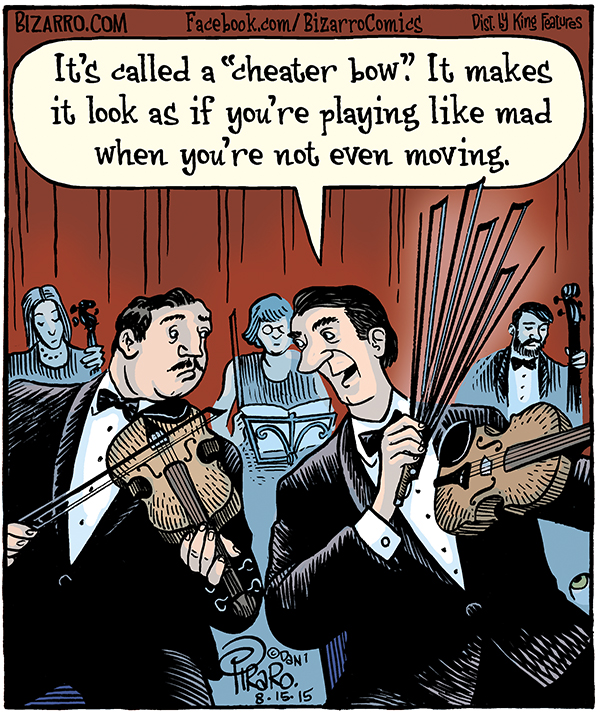 My Saturday gag for the week is about a lazy musician’s clever invention. I love that it works as a graphic because that’s how you’d draw a fast moving bow, but in reality, it wouldn’t look like it was moving at all. Hahaha. My eldest daughter, Krapuzar, was a pretty talented violinist as a kid and I still occasionally think of violin gags as a result.

I’d like to invite you to follow me on Instagram where I post very weird images from my sketchbooks, and will eventually be posting pics of my fine art, which I’m doing more of these days. @danpiraro is my handle or name or whatever they call it over there. I’d also like to remind you that if you like any of my sketchbook images, I can do a similar one just for you on a fancy-schmancy sketchcard of my own design. You can order one or just chat with me about it by filling out the contact form at the bottom of this page.