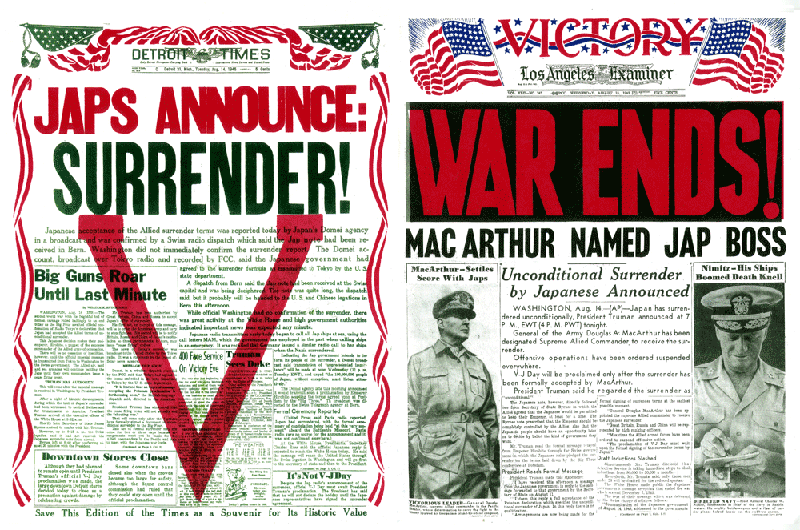 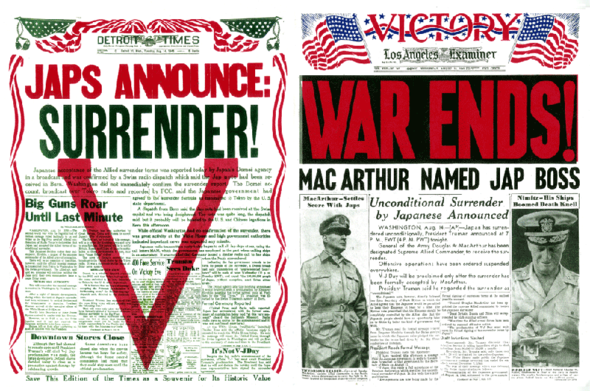 Today we commemorate the seventieth anniversary of the end of World War Two, coming this Saturday. The costliest war ever fought,  we beat our evil foes completely, with American men, machines and finally, atoms. It must have been an incredibly exciting time, those final weeks leading to the triumph over Japan.

Usually I present a selection of strips published the day of an important anniversary, but since I just did that in May for V-E day, and it would practically be the same line up, today I’ll show how the end of the fighting affected some of the characters in the strips.

It took several days or even weeks for the reaction to finally be seen, as it took that long to work out the strips already drawn and set in advance.

For the most part, victory meant more than just the end of rationing, priorities, scrap drives and government emergency regulations, it meant the fighting men would return from far away fronts, at last safe from the horrors of combat. Cartoonists reflected this, and returning home is seen as the topic of the day many times. 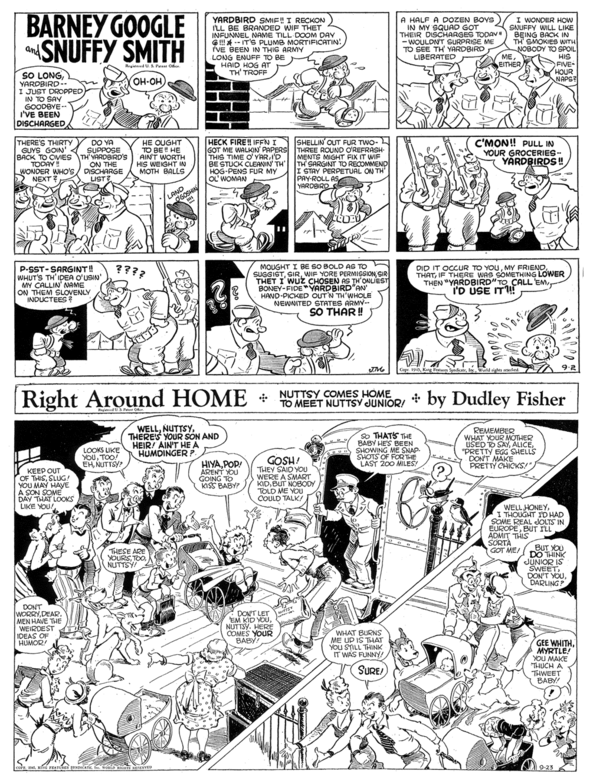 Barney Google and Snuffy Smith: The term “Yardbird” was army slang for a rookie soldier during training. It would seem that Billy DeBeck, who loved colloquialisms, died while Snuffy was still training, so the nickname just became permanent.

Right Around Home: A homecoming for a returning soldier, who gets punked. 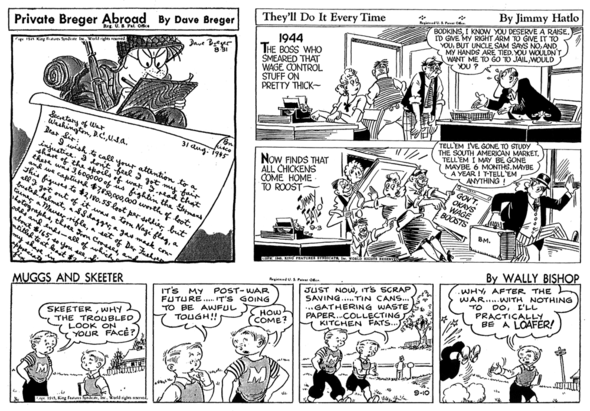 PRIVATE BREGER ABROAD by Dave Breger 31 August 1945
THEY’LL DO IT EVERY TIME by Jimmy Hatlo 3 September 1945
MUGGS AND SKEETER by Wally Bishop 10 September 1945.

They’ll Do It Every Time: Washington made up all kinds of new rules for civilian life during the war, many incomprehensible, all deeply resented. 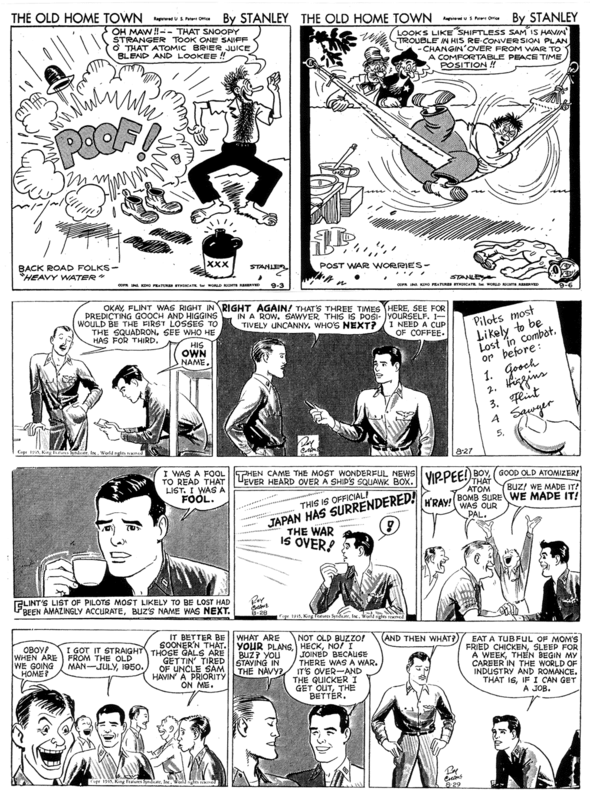 Buz Sawyer: Caught in the middle of a story where a jinx list of pilots has them picked off one by one, Buz’s number is just about up, but the war puts an end to the threat and the story, and Crane got out of it gracefully. 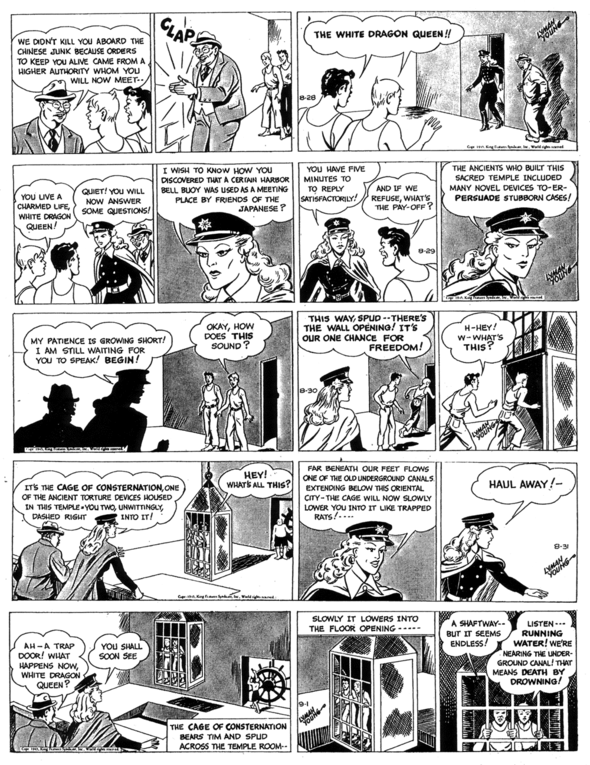 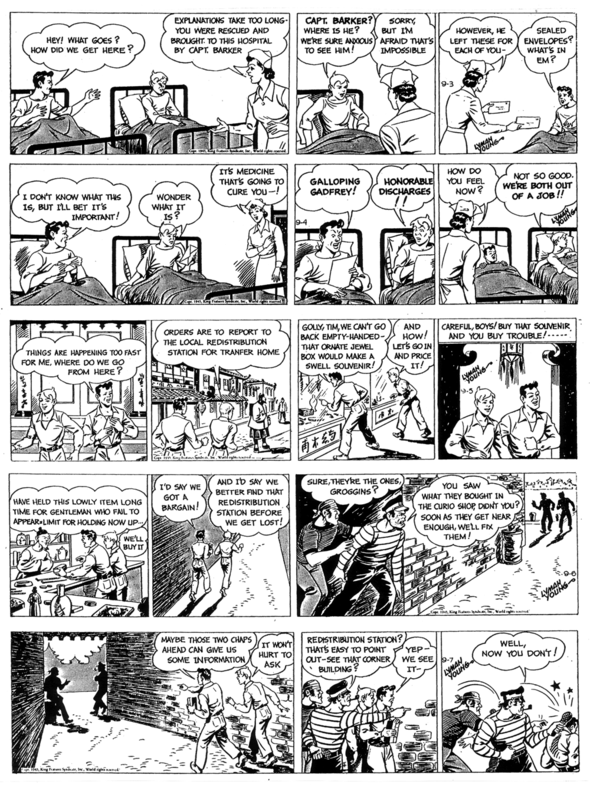 He’s in the middle of a story, a preposterous yarn involving an unlikely blonde Japanese woman general/admiral/pain mistress and secret tunnels . Differing from  Mr. Crane, Mr. Young couldn’t think of how to write his way out of it, so he just bails on  the story without bothering to tie up any dangling  loose ends at all. Kind of a cheat on the reader. 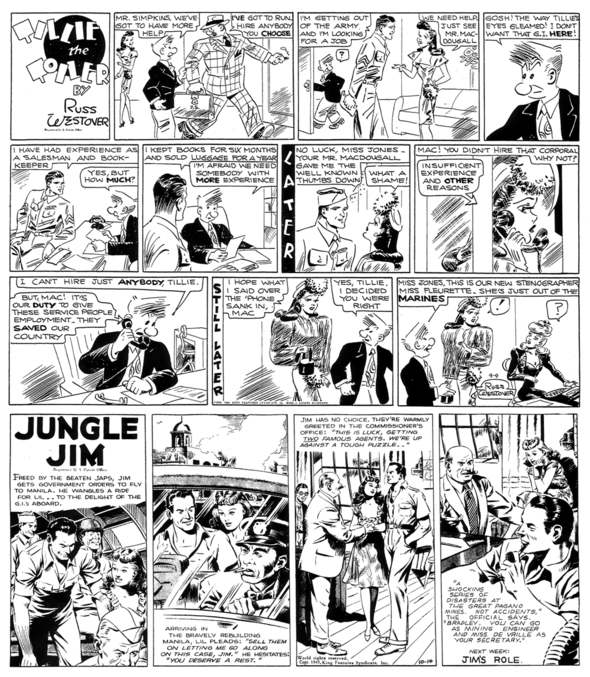 Tillie the Toiler: There were millions of women in uniform in the auxiliary services during the war, too, which Tillie should have remembered because she had served in the WAACS earlier in the war.

Jungle Jim: Jim’s encounter with peace was just as abrupt as Tim Tyler’s; one week we see he was a prisoner of a Japanese officer intent on giving him “The death of a thousand slices,” and the next, we start after an unseen  and undescribed rescue has taken place. Another gyp if you were following the story. Sudden Allied triumph played havoc with continuities! 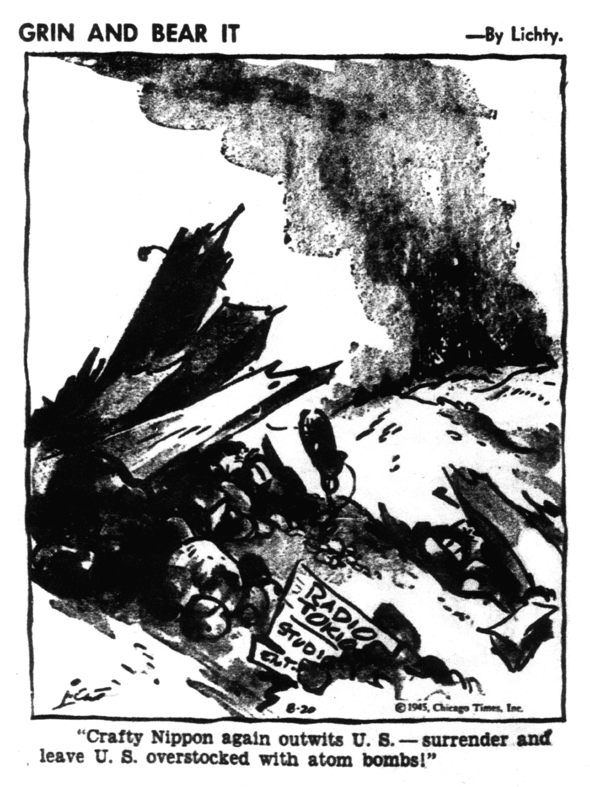 In a fast turnaround for a syndicated panel, Lichty comments on what ended the war, the A-bombs.

And now, to take a look at the mailbag:

Hello Lulu- haven’t heard from you in a while.

You may see more Phantoms with that color, in some instances we used what were called the “art” proof, which were usually sent to the artists and/or writers of each strip. The inks used  were practically paint!  Most of the time we use what the syndicate saved, the “Black Plate” proofs showing the strip in its black and white element only. Years ago, there were a substantial amount of papers, especially in international markets, that had no color. So it made sense that that would be the master copy. It’s too bad we didn’t save just the beautiful Art proofs, but until recently, they would have been useless. Such irony.

Yes, Westover did Tillie from its inception in 1921 until he had to retire in 1956. Tillie went on until 1959 by Bob Gustafson.

It’s been said that Clare Briggs’ A. Piker, Clerk in the Chicago Examiner was the first daily in 1903. There’s another contender, The Important Mr. Peewee by Harold MacGill that ran for two straight weeks in the New York World, if I’m recalling it right. Haven’t gone through my notes on it for about forty years!

Fisher’s self-syndicated daily strip was a groundbreaker in syndication, but by the summer of 1915, there already were those that beat him to the punch with a six-a-week daily in small syndicates like Liepzieger’s Doings Of The VanLoons at McClure starting in 1910,  or Frank Hopkins’ Scoop the Cub Reporter at International beginning in 1912.

Thanks for looking in,