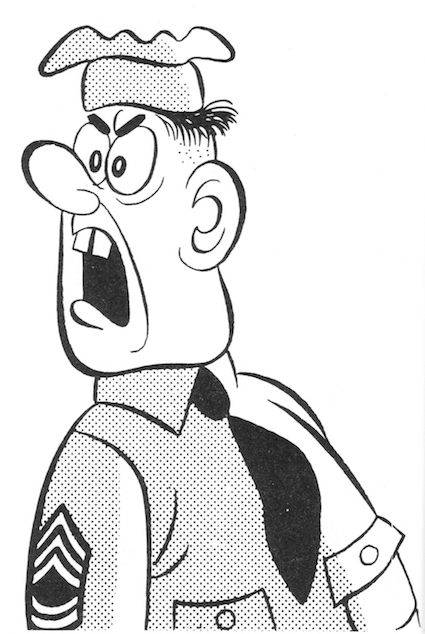 When Beetle Bailey joined the army in 1951 he needed someone to keep him in line. Sarge was the result.

“Sarge is probably my favorite character to draw,” Mort Walker recounted in the 1984 book, The Best of Beetle Bailey. “Not only does he look funny in all positions, but he takes up a lot of space which saves me from drawing a lot of backgrounds. He’s garrulous, profane, ecstatic, rough, sentimental, voracious…he does everything to the extreme.”

Here is the first appearance of Sarge in Beetle Bailey.

In the beginning his only characteristic was meaness. He was much leaner than he is today and had two front teeth instead of one.

Sometimes he spoke with an accent.

Sarge gradually took shape and evolved into something that resembled, in Mort’s words, “a blimp in full bloom.” Stay tooned to see how he became the character that readers came to know and love.