Ask the Archivist: HERE’S HOW 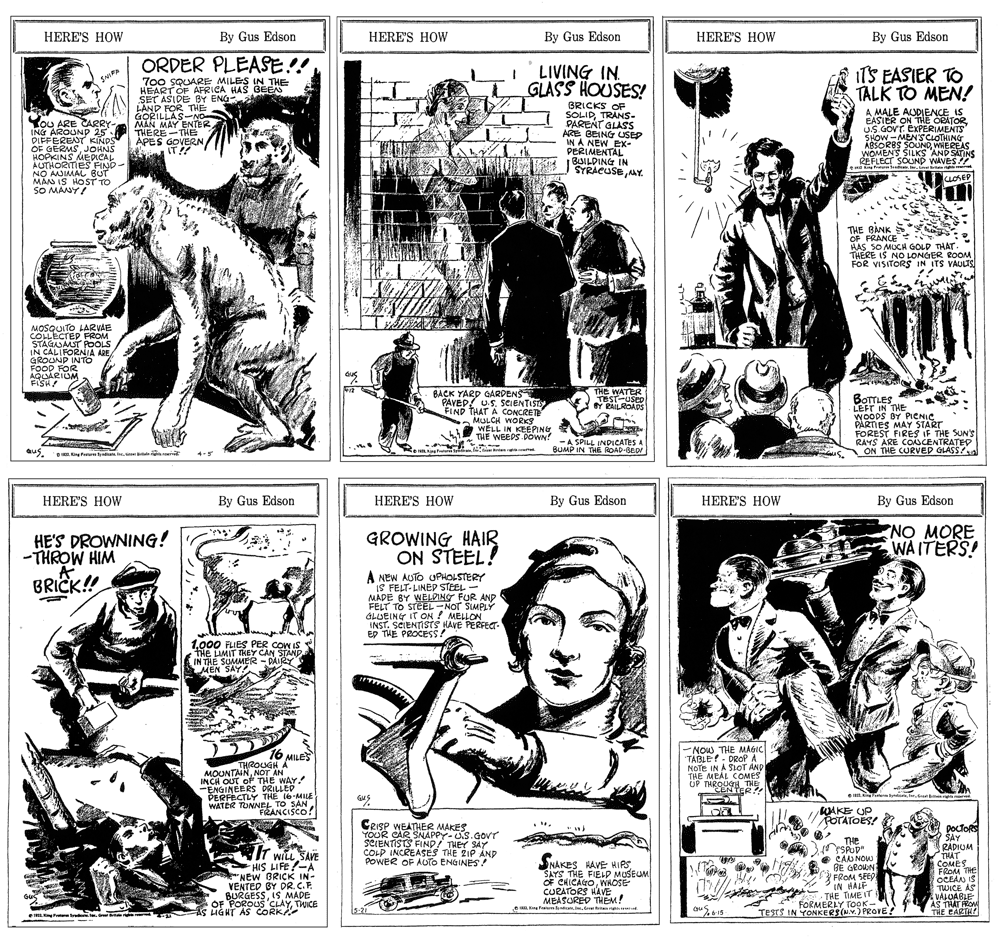 A few weeks ago we showed some samples of Scott’s Scrap Book, a Ripley’s Believe It Or Not- style panel showing oddities of the natural, scientific and human world, as well as unusual factoids involving famous people and places in history. R. J. Scott’s feature was well-received, lasting thirty-six years.

My impression was that, in light of the huge popularity of Ripley’s panel, and even other syndicates’ knock-offs, we were anxious to have our own Believe It Or Not, and we tried one before Mr. Scott’s venture, an obscure item called Here’s How.

Gus Edson (1901-66) is best known for his years at the Chicago Tribune Syndicate, doing The Gumps from 1936 to 1959 and creating Dondi along with Irwin Hasen in 1955.  However, years before, Edson was a staff cartoonist at one time at the New York Graphic, and self-syndicating a sports cartoon in the late 1920s. Starting on 10 November 1930, he did his only work for King Features with his daily Ripley-esque panel of which we look at today. 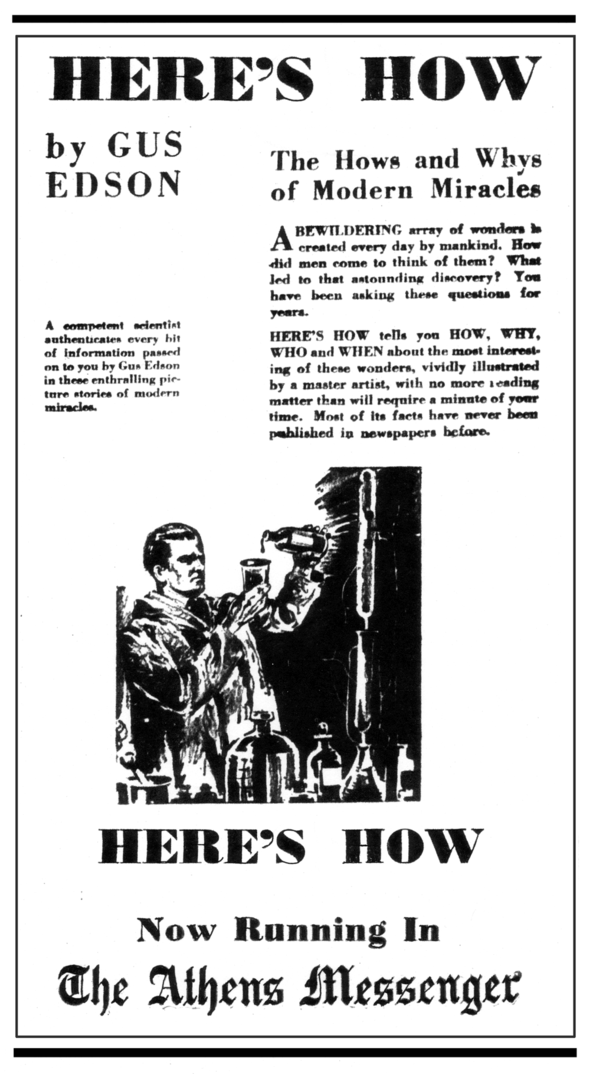 Ask the Archivist on HERE’S HOW comic

The original promotion emphasizes the scientific marvels that will be reported in the series, and it did have a lot of descriptions of what was then amazing new technology, like powdered lemonade, tracer bullets and microphones so small they could fit on a lapel. For instance, below is a cartoon showing a forerunner of microwave cooking. 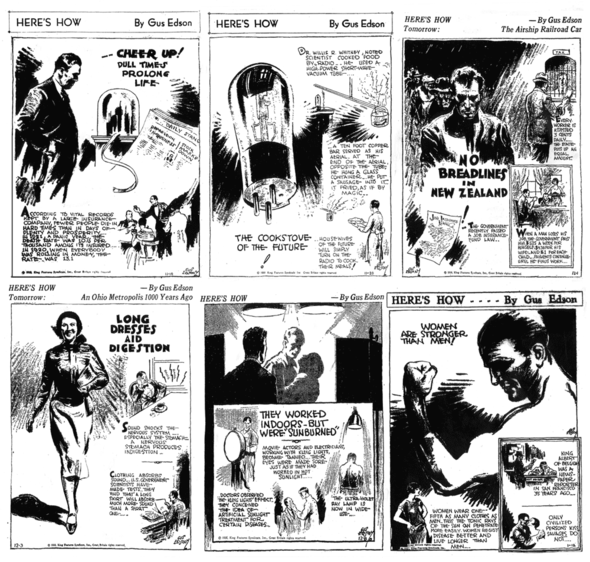 But Edson didn’t stick to facts, and preferred illogical, attention-grabbing hyperbole over a more serious approach. Here’s some of the stories offered:

The reason the telephone company is switching from the then-current system where you told the operator what number you sought, to dial yourself phones was because by 1950, there’ll be a girl shortage, hence not enough operators.

Old time music speeds work and hot jazz slows it down because it causes mistakes to be made.

Passenger airlines are installing robots to pilot their planes.

Instead of an alarm clock, a new bed will shake you awake.

Thrilling fairytales will make a child’s heart slow down, and may prove fatal.

A Russian-invented an underwater rocket ship that will cross the Atlantic in two days. 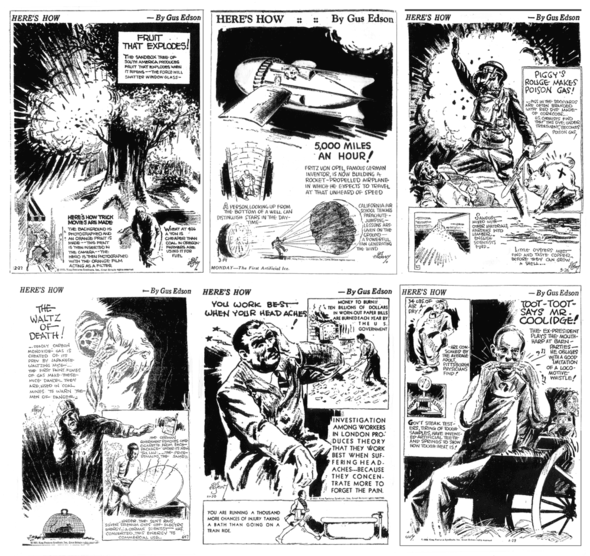 Most of the time there’s no vetting of these stories, and no sources or backup story is provided, as Ripley would.

Edson had the classic sports cartoonist/Landon school-art style. He liked the charcoal on matte-finish look that Ripley himself favored, though he was not always as skilled as Rip, especially in proportions and faces.

The panel never made much of an impression, and ended on 25 June 1932. 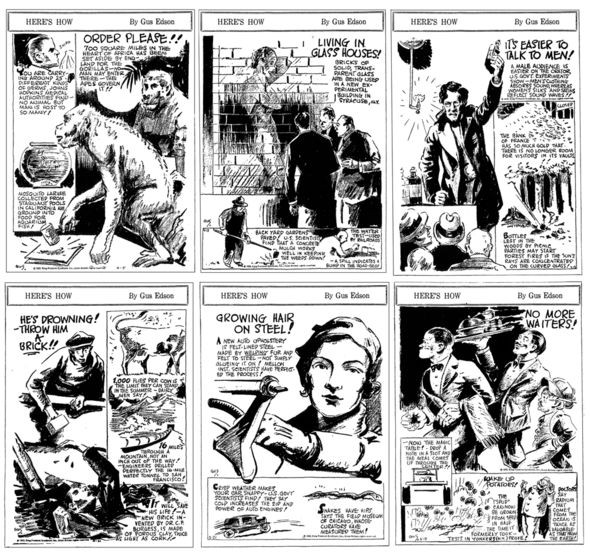 More samples of HERE’S HOW comic

Last week, I received the following request in reader comments.

Here’s the cover of a 1953 Albany Times-Union comic section. I can only have a few illustrations a week, or I’d show you the whole thing. Jiggs had been on the cover of the Hearst section since 1918, and would be there until 1955, when Blondie took the spot. 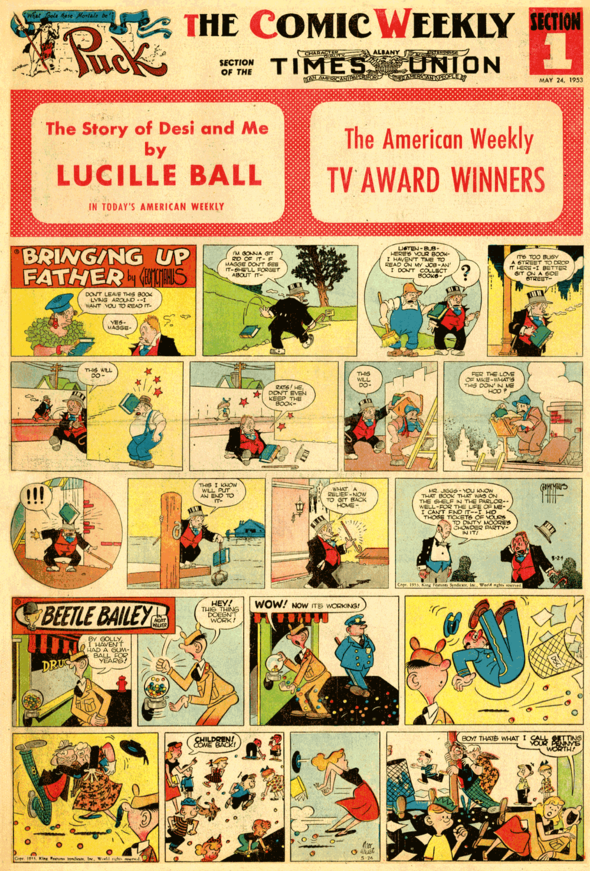