In keeping with the “Money Manners” crossover theme this week, The Archivist revisits the series in “Bringing Up Father” where Jiggs loses the family fortune. As Jeanne Fleming and Leonard Schwarz have advised this week, money does funny things to people! We hope you enjoy this week’s “Ask the Archivist” on the thin line between fortune and riches and bad luck and loss.

What happens when you lose everything? Fortunes can be made and they can be lost. Once the most famous millionaire in the comics, Jiggs got wiped out in a movie studio deal that went sour. I’ve been asked how he became rich in the first place, and according to creator George McManus, he said in an interview it came from selling bricks on commission. That seems farfetched, but clearly the movie game was out of his realm of experience.  Here’s the promotional copy release of the event (3 November 1923):

The mounting price of coal, rent, potatoes, cabbage, and the other grim necessities of life has become, almost overnight, a chill and dreadful thing to a family which for many years has lolled in the lap of ample prosperity–that of Jiggs, the merry little ex-millionaire who for years has made all the world laugh as the principle character in George McManus’s famous newspaper cartoon, “Bringing Up Father.” 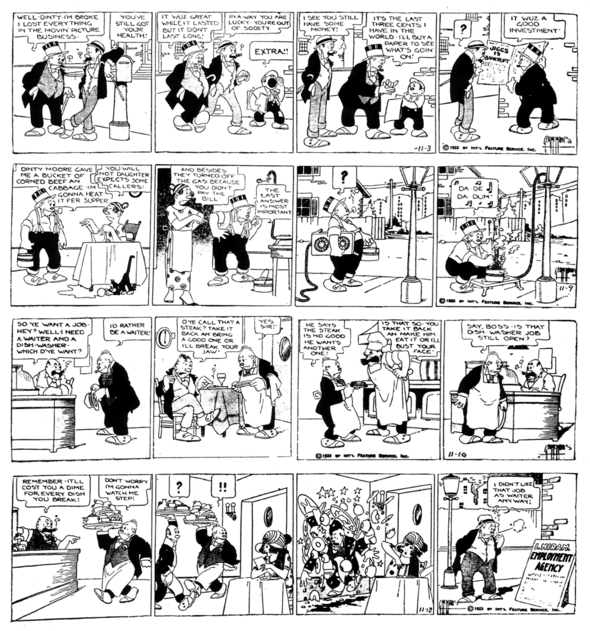 Yes, Jiggs has gone flat broke. And in the case of Jiggs, BROKE means BROKE. Not the comparative poverty of the citizen who has to sell his half dozen cars, put his wife’s diamonds in retirement for a while, revoke his subscription to the opera and cancel the dinner dance he was going to give his daughter on Hallowe’en night, but the real thing.  Jiggs who for years kept a working balance at the bank nearly as big  as Henry Ford’s and ate corned beef and cabbage not because he had to eat it but because he preferred it before terrapin and guinea hen, is down now to hard pan in the fullest sense of that fearsome expression.  He has nowhere to go but out and can’t go there because he is there already, having been given the freedom of the middle of the street by a cold-hearted landlord to whom all non-paying tenants look alike.

In a series of comic drawings of which the first appears in the (Client paper) today, his creator, Mr. McManus, will depict the mournful renewal of acquaintanceship between Jiggs and hard brass tacks after more than 20 years. 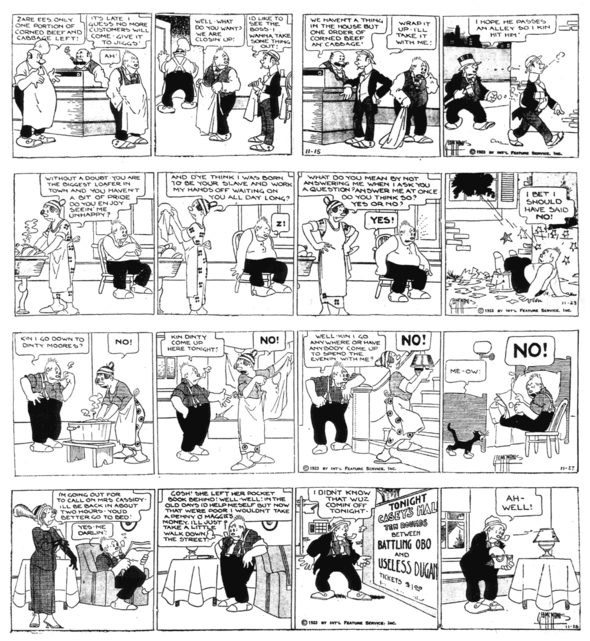 It was an adventure into moving pictures that laid Jiggs low. Ever since he has been of the idle rich, Jiggs, in common with every active business man who ever joined the ranks of the retired plutocrats has had a quiet hankering for the flurry and stimulus of work and success again. He was in the mood when a “grand opening” into moving pictures was proposed to him by a shark on dry land who represented a syndicate of sharks who had a moving picture business that needed a partner with a long purse and plenty of inexperience. Jiggs fell like a wet mattress off a gabled roof, and, with the deadly precision of water following the course of gravity downhill, his money departed from him and left him flat.

But his creditors have been powerless to divest him of his wit and spirit and, with these and his faithful spouse Maggie for his only assets, he is facing the world again with the same dauntless courage that once raised him from a laborer to the proud eminence of bank director and moneyed capitalist.  In the cartoons portraying his present poverty-stricken status, you will laugh with him as well as at him while the soft-spoken captains of irregular business take his money from him and leave him with nothing but the mortgage on a movie lot, and you will applaud his spirit while you laugh harder still, in the tiny cottage where he plans the renewal of his fallen fortunes while Maggie cooks him a steaming dish of his favorite corned beef and cabbage on the cracked stove filled with bits of coal that he gathered along the railroad track. 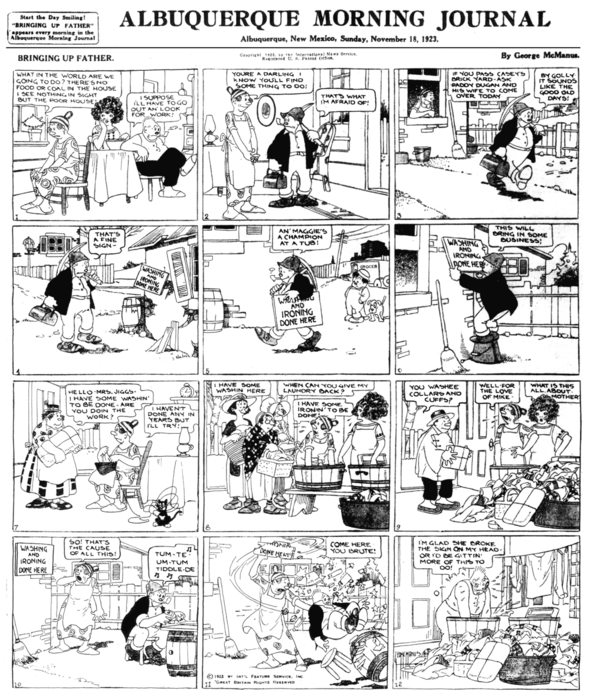 In due course, and of course, Jiggs will be on top of the world again, for you can’t keep his manner of man down. So don’t worry and grieve about him but just make sure that you see each and every one of his “poverty pictures.”  Or don’t look at them and miss the laugh of your life.

The same month as this series, the world was seeing one of the major financial disasters in history in Europe, as the legendary German hyperinflation reached a staggering 4,210,500,000,000 Marks to the U.S. Dollar. Germany’s and many other post World War One currencies were worthless enough to be bundled up and sold as play money in Woolworth stores or overstamped with ads and used as handbills. I wonder what we’d see today if there were any more Woolworths now. 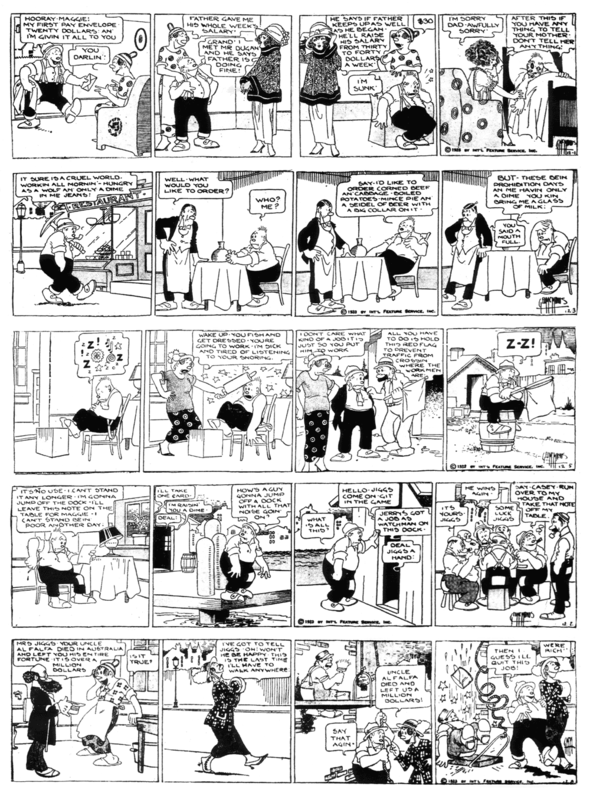 The short-lived poverty of the Jiggs clan ended in December when it was shown that a rich relative had left them a wonderful inheritance. No skill needed for that! Too bad we can’t all get out of money problems so easily.