This week, Comics Kingdom launched the newly expanded Puzzles Palace section, which offers users access to more than 50 of the world’s best games, including such massively popular favorites as Crosswords. So it comes as no surprise that The Archivist takes a look back at the crossword puzzles of yesteryear…

When you finish reading about how it all began, go have some fun here: http://puzzles.comicskingdom.com/

The big Independence Day weekend starts any minute now. Perhaps when you’re away from work, you might fill some time with crossword puzzle-solving. There’s more than a century’s worth of crossword puzzles out there, and many have come from King Features.

The first ever seen was in the Sunday New York World, one of the Hearst publishing rivals. It was created by Liverpudlian Arthur Wynn and ran on 21 December 1913.

His brainchild caught on slowly, but in the early 1920s, it became a huge international fad, complete with crossword tournaments, clothing, classes teaching strategy, toys, and lots of newsreel trivia about special floats so that swimmers could take a puzzle break in a pool , or crossword-pattern poodles or tiny “crossword dictionaries” that might be tied around a woman’s calf.

Hearst offered the puzzles beginning in the 1920s. 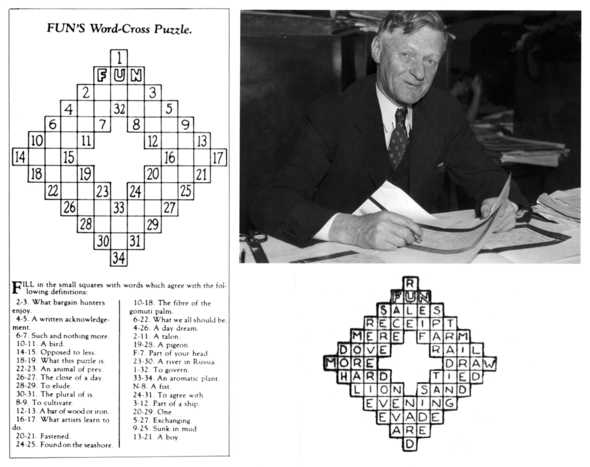 Dr. Eugene Sheffer (1905-81) was a onetime Columbia University professor whose real passion was French literature and culture. Obviously writing puzzles, too. He wrote one of the best for us for many years, beginning 24 June 1929, taking over one already in existence, with the prosaic title “Today’s Cross-Word Puzzle”. Later, it was called “The Crossword Puzzle by Eugene Sheffer.” Today’s puzzle still bears his name in tribute. 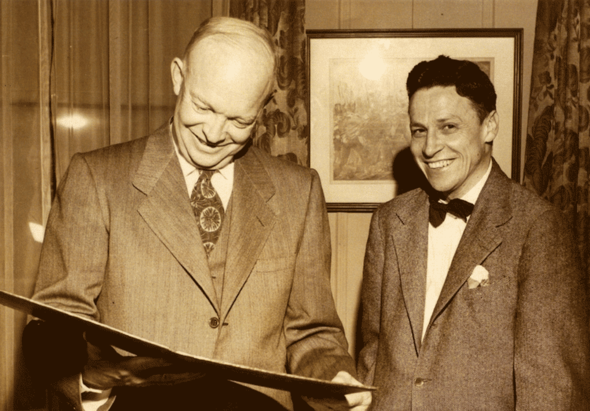 Eugene Sheffer (1905-81) hangs out with his boss Dwight Eisenhower in 1951, during Ike’s tenure as president of Columbia University.

Sheffer’s first puzzle for us, and its solution.

In the beginning, the center of each puzzle had a picture of a personality named in the puzzle, as one of the “clews” (as that word was once spelled). That was given up in 1930, and it took on its conventional appearance. 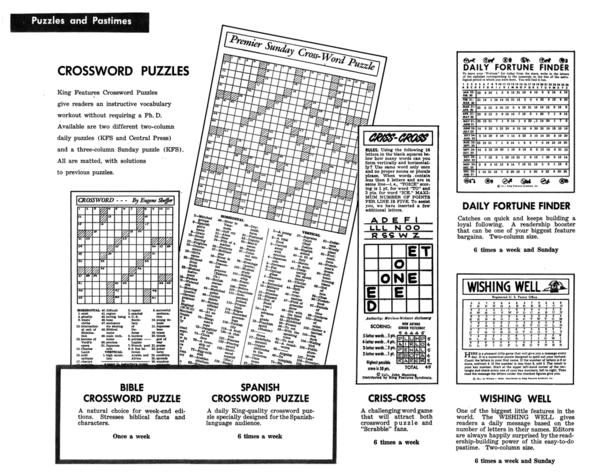 Some of the puzzles offered by King Features in a 1960 promotion.

Another long-running series we produced was the Central Press crossword puzzle, which was created by J. B. White in the late 1920s and lasted into 1969. 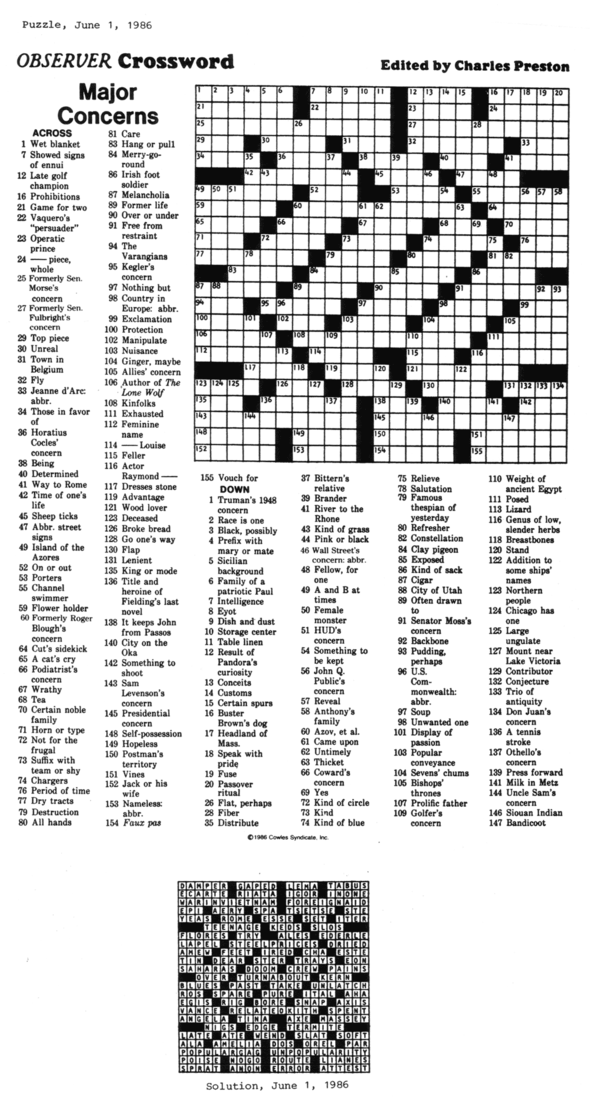 When the Dow Jones weekly newspaper, “The National Observer,” folded in 1977, its crossword had an afterlife in syndication until 1994. 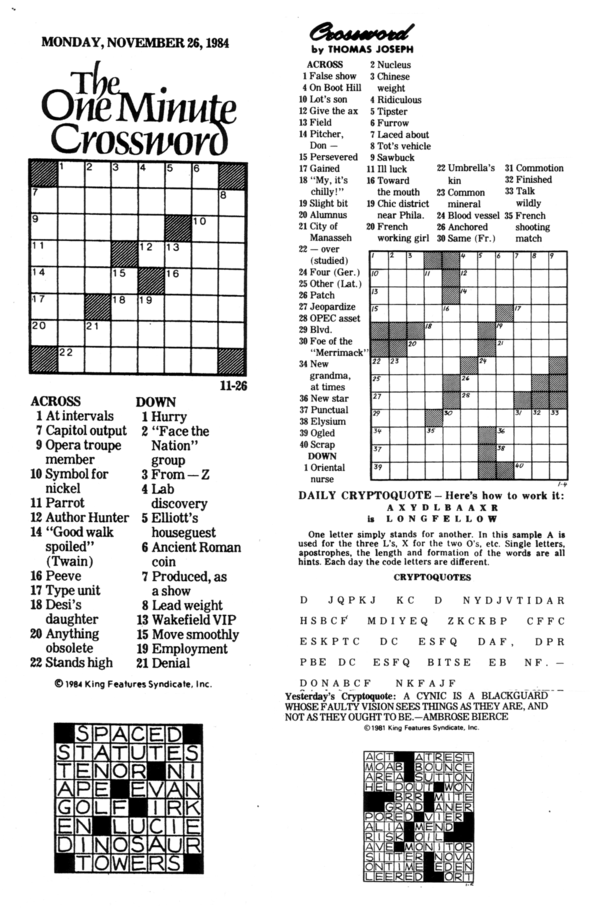 Two other KFS puzzles fondly recalled by fans were “One Minute Crossword”
and the Thomas Joseph Crossword.

To Timothy Fisher-
If “Channel Chuckles” were revived, I’m sure I wouldn’t get any of it because I’m too old to know or care about the current crop. Politics, legalities and celebrity being as it is presently, one might get sued for making an unflattering reference anyway.

To albert71292-
I can’t add a Channel Chuckles file to the site, though I’d think it would be fascinating and educational- just too few would get the aging references. To most, it’s as much an alien culture as if it were from some far-off country. You had to be there.

To Mike Smith-
I was surprised Bil Keane kept the Channel going as long as he did. By the 1960s he had competing TV-oriented gag panels, two I remember were “Station Break” and “Show Biz by Flash,” which, just like Channel Chuckles, would usually  be found cropping up among a paper’s TV listings, though Channel Chuckles had a Sunday version.  By the 1970s Keane didn’t need two features, and would rather devote his working hours to The Family Circus and his leisure ones to tennis. Besides, TV was no longer that fresh or exciting to one who’d been exposed to it for thirty years.

To John W Kennedy-
Hiram Holiday was a man of adventure and action, accompanied by a bumbling but earnest sidekick as bad guys would try to get secret formulas or priceless gems or whatever the MacGuffin was that week with guns, bombs or blondes. Holiday was a super genius, able to out-strategize, outshoot, outduel or out-romance his adversaries and never break his cool, patient demeanor. The switch is that instead of some stalwart he-man type, it’s puny little Wally Cox and his inept, bewildered cohort (Ainslie Pryor) was the big, handsome chap.

It was a much-anticipated series in the fall of 1956. After all, Cox had been a smash in Mr. Peepers, and was thought of as a leading young comedian of the new medium. But the series was such a one-note gag, it had nowhere to go from that and was cancelled in February 1957, with several episodes never aired until they went into syndication.

The Coronation of Queen Elizabeth was not the first televised; BBC did her father’s in 1937.

In 1953, NBC flew over a kinescope machine to record the proceedings, and developed the film on the plane headed back to New York so they could show it here. It was the first international television event. Now everything is.

See you all here again next week. Get ready to feel POORly…