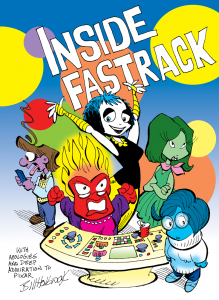 Personally, I would hardly call Wendy Sadness, but the rest…yeah.

My next con is my annual appearance in Pittsburgh at Anthrocon (July 10-12), which as always will feature the Kevin & Kell patron social on Friday night, July 10. I’ll be at table K00L in the Dealers Room. (Yes, someone had a sense of humor when they assigned me that.)

I’m proud to debut “Dethany in Virtu/Noir,” an interactive novella featuring Dethany of “On the Fastrack” as she adopts a 1940s private eye persona to solve a crime in cyberspace. Along with John Lotshaw and my wife Teri Holbrook, we’ve created a unique blend of words and images, available for the iPad. Readers will be able to make choices determining the direction of the plot, and we estimate that it offers roughly two hours of crime-solving fun. It’s yours for $2.99. Learn more about it by visiting its website here.

I’d like to thank Norm Feuti of “Retail” for spreading the word about “Dethany in Virtu/Noir” on his blog. If you haven’t seen “Retail” and the put-upon staff of Grumble’s department

After several years of research I can definitely make the claim you see at the top of the page. “Kevin & Kell” is without doubt the longest-running continually updated daily webcomic, having never missed a scheduled upload in almost twenty years.

The print version of the 19th “Kevin & Kell” collection “MOUSCAR” is available for purchase here! Meanwhile, the 2013 strip collections are still available, both from Lulu and now on Amazon.  “Kevin & Kell’s” “Predator Camp” is on sale here. “Freshly Dethany” features the entire “On the Fastrack” year of 2010, when our favorite Goth joined the strip. (The book replaces “Dethany, the Corporate Goth” which is now permanently out of print.)  The “Safe Havens” book also contains the calendar year of 2010, which was dominated by the cast’s epochal summer in Las Vegas. Its title is “Viva Safe Havens.”  Don’t forget that the 2009 “Fastrack: Bailout” and “Safe Havens: I Married a Mermaid” collections are also on sale.