Among the most distinctive art styles in strips ever was that of Franklin Morris Howarth (1864-1908). His unmistakable, bug-eyed, bobble-headed people are unique.  He had been drawing gag cartoons since the 1880s, at times for Life and Judge and most, notably, Puck. The last seven busy years of his life were spent in comic strips, first doing art for Pulitzer’s organization in 1901-02; then for Hearst until 1907; and, finally, for the fledgling Chicago Tribune syndicate in his final months.

At Hearst, his most famous creation was Lulu and Leander, Today, however we’ll look at a character he designed for the weekday papers (this was before every day features), one Mr. E. Z. Mark.

E. Z. was perfectly named, for he was the ultimate easy mark for any swindle, bunco or con job, elaborate or crude. Apparently he lived and worked in an unthinkably high crime neighborhood, but nobody ever had to use force or fear to rob E. Z. He was so stupid any trick worked on him.  Nothing is safe in his care, jewelry, silverware, even his own wallet.  E. Z. was probably the most gullible man ever to be allowed out on the street without a minder.  If he was around today, he’d be giving out his social security and credit card numbers to every phony pseudo prince on the internet.

Somehow, he was wealthy, often  losing money or possessions in the $50-$1,000 value range, which was quite a sum in an era when you could live on $10 a week. Mrs. (Mary) Mark shows little patience with him, often calling him names and threatening divorce or to have him committed for his irremediable credulity. Fate relented sometimes, and dopey old E. Z. might have a stroke of good luck, allowing him to stay rich, and married.

Howarth’s humor is not violent, some tumbles and punches here and there, but in E. Z. Mark, the gags are completely driven by the hero’s predicament when he realizes, too late, what an imbecile he’s been again.  The intense depictions of horror and anguish on Howarth’s protagonists’ faces are still striking all these years later. Here are a few samples from 1902-1907. 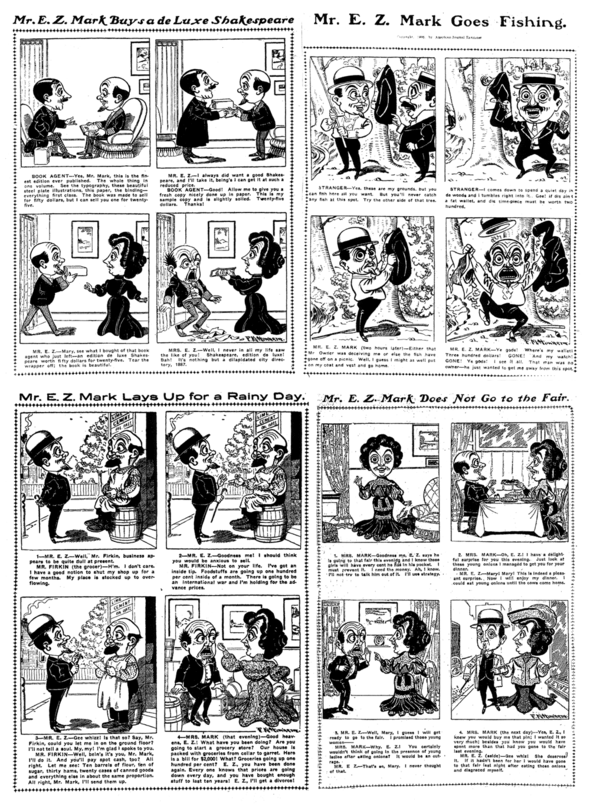 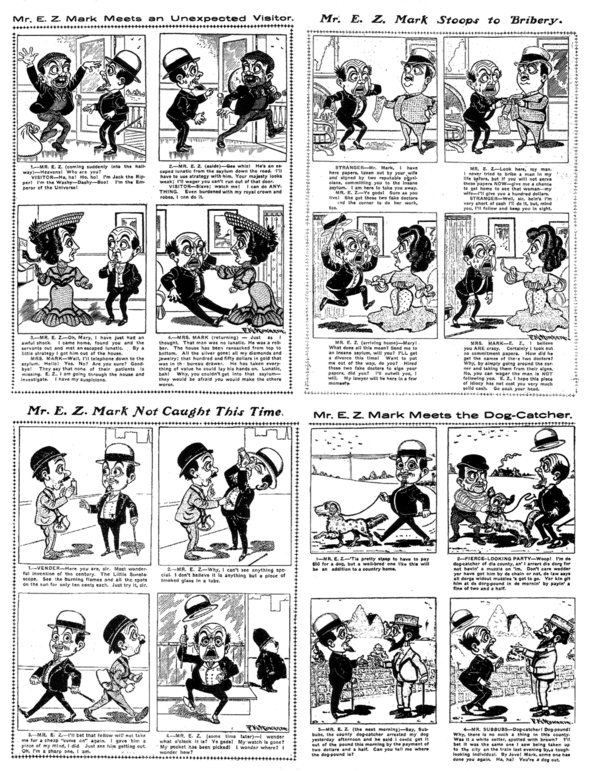 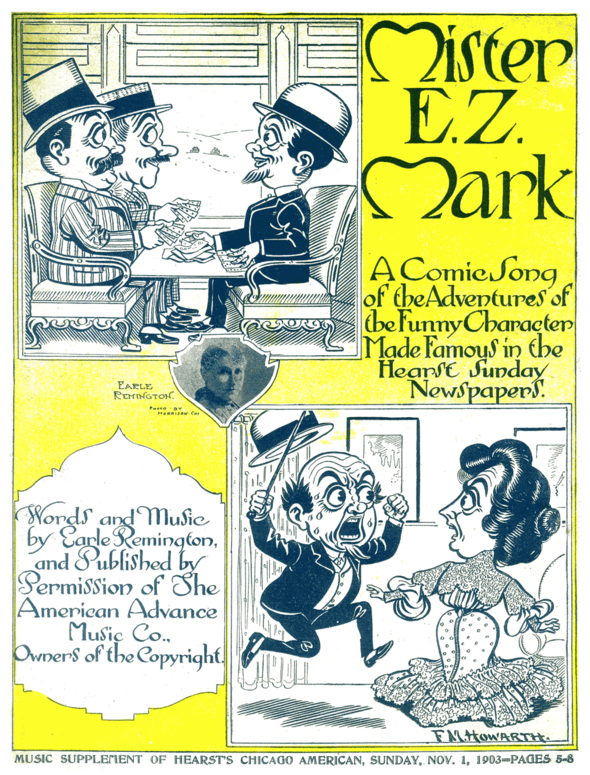 Note the copy quotes E. Z. as being “made famous in the Hearst Sunday Newspapers”, but the strip was seen exclusively in the weekday editions. Other recycled weekday offerings like “In Birdsboro” and “The Hall-Room Boys” were syndicated to some clients that ran a page of them on Sunday under headings such as “With the 20th Century Fun Makers.” But the music sheet’s copy writer is still wrong because a Hearst chain paper had the actual color comic section on Sunday.

And now, on to comments:

To jeffconn-
I don’t know if the 1929 Thimble Theatre Sunday strips have been published– Popeye doesn’t crash the page until March, 1930. I’d love to show them, but I have no file like that. Pity!
To John Rose, Marcus Hamilton, Ron Ferdinand, Bernie-
Glad to give you a look at some 1980s Dennis Sundays. However, I’ve been told that some of the Ferdinand artwork I showed last week actually can be attributed to  Karen Machette. Sorry, Ron!
Yours,
THE ARCHIVIST