Ask A Cartoonist: Asking for a Re-Do!

You know those days when you just wish you could ask for a do-over?  Everybody has them– including our cartoonists.  This week, I asked cartoonists to talk about comics they wish they could re-do– or ones they’ve re-done!

In my early training days with Hank, RE-DOs were the name of the game. The one on the left is my feeble attempt and the one on the right is Hank’s masterful answer. 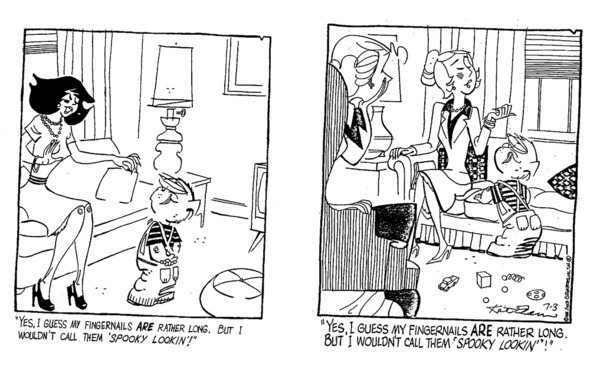 Hank always used to say, “There’s more than one way to skin a cat”, but HIS way was usually the most sublime.

This one is just kind of strange, so I never used it for Six Chix. 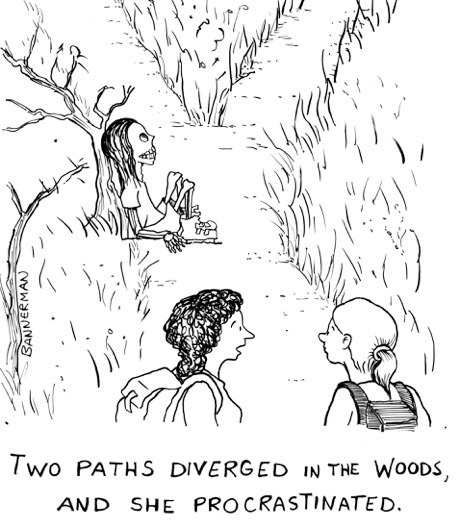 I ended up re-writing it, and it did end up as a Six Chix comic, but in a very different format.

This happens a lot when I’m writing. I get obsessed with a phrase like “two paths diverged in a wood”, and it can sometimes take a lot of playing around before it turns in to a gag.

“Bradford ‘n Nan” was my attempt to create the Worst Comic Strip in the World back in 2000. I regret everything about it—If I had it to do over again….I wouldn’t.

On a recent Thursday, I opened up the comics pages of the Richmond Times-Dispatch, and glancing at “SHOE,” I felt my stomach drop . . . I had drawn the stem of the balloon in the final panel pointing to Shoe. Unfortunately, it was supposed to go to Cosmo. Why did I do that?! . . . Actually, I work digitally, and after the drawing and text are all in, I put in the balloons. Then I zoom in really tight and draw the stem pointing to the character speaking. On this toon, I had simply pointed it in the wrong direction, and not caught it, until I did the color version a few days later. By then, it had gone in to King to be processed and then sent out to the client newspapers all over the country. Long story short, the correction didn’t make it out to the papers! Fortunately, the color version that appeared on Comics Kingdom was correct.

I don’t want to redo them. I have to redo them. I just sent tis strip off today followed by the replacement which, of course, will be used. Guess which one was the original.

I have more than my share of Dustins that I would love to redo. I’m not one for being happy with most of my output, but this Sunday page in particular just makes me wince. IMO, the drawing killed the gag.

I tried sketching this all sorts of ways before deadline decided it was time to end it and just get the job done — which I hate doing. Also, our horizontal format made for a challenge as well.

The first panel is okay, the BOOM even works well enough, but that third panel showing Dustin as a dud, face-planting just a few feet in front of the gun’s muzzle, is a cringeworthy mess. I didn’t get the right perspective on the cannon at all. Does it seem to be bent upward a bit (or is it just happy to see me)?

Despite my poor execution, this remains one of Steve’s favorites.

I don’t know why, but this strip from 1966 has always been one of my favorites.  Sometimes you want to redo things because you like them so much.