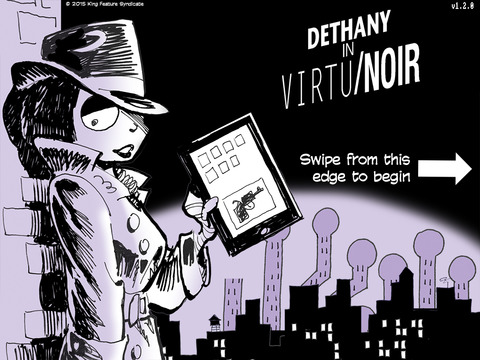 I was in Washington DC this Memorial Day Weekend for the NCS 69th Annual Reuben Awards. I haven’t been in a couple of years, so it was nice to catch up with a ton of cartoonist friends, many of whom have are working on exciting new projects.

One such project I wanted to give a shout-out to is Bill Holbrook’s interactive Virtu/Noir app, based on his popular comic strip character Dethany from On The Fast Track. Dethany the Corporate Goth takes on the seedy underside of the online environment VirtuNoir in this fun tribute to the world of Dashiell Hammett and Sam Spade. It’s fantastic, and fun, and exactly the kind of thing that has kept Bill relevant in comics for decades.

Bill has always been on the cutting edge of new technology. He’s been doing Kevin & Kell since 1995 for Pete’s sake. He had a webcomic before webcomics were even a thing! But, don’t take my word on any of this. Go see Bill’s great work on Safe Havens, On The Fast Track, and Kevin & Kell. When you’re done, check out the app at virtunoir.com, or iTunes. At the time of this writing it’s a steal at $2.99.