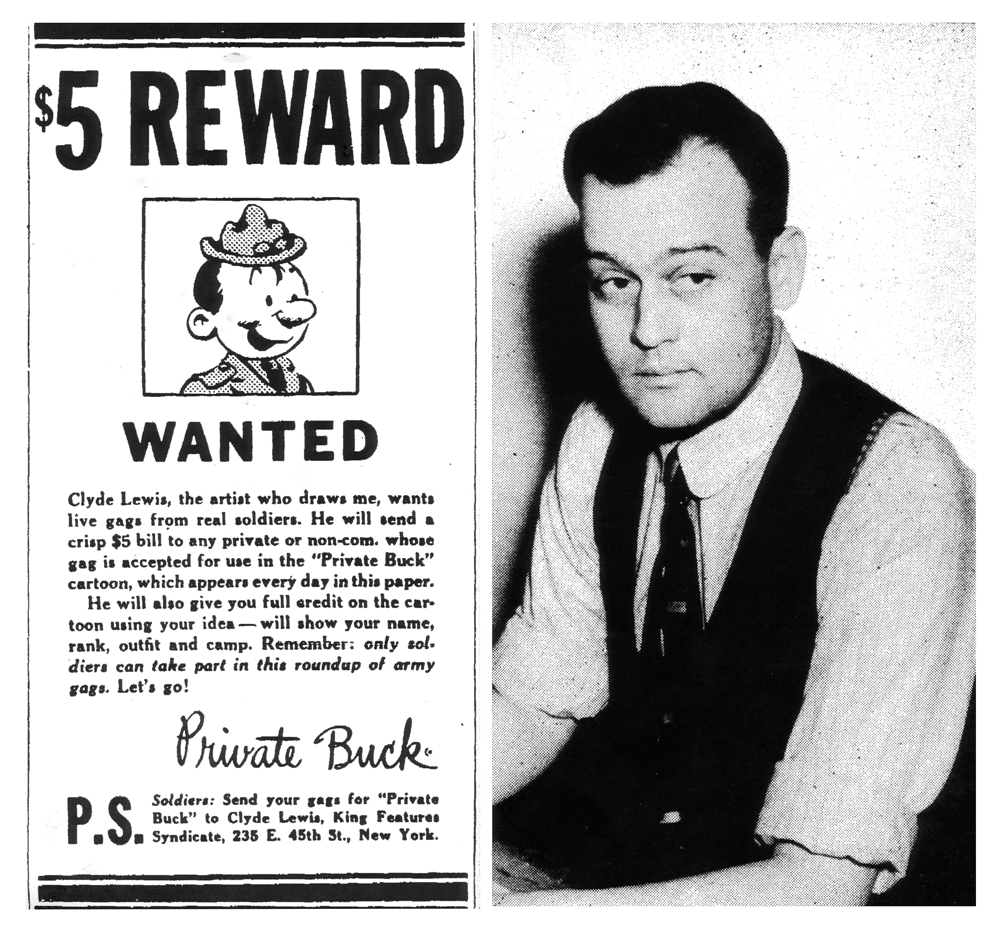 For the upcoming Memorial Day weekend, and with the seventieth anniversary of World War Two’s end this year, it would be apropos to bring out a panel about an all-American soldier who battled on the home front and in every fighting front from Alaska to India…battled for laughs, that is. 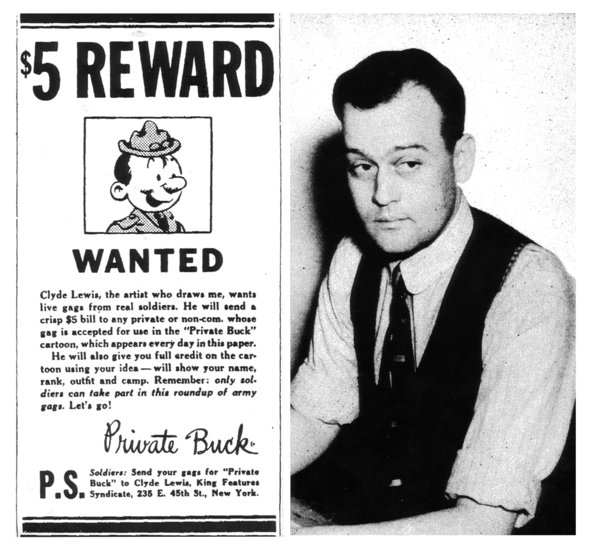 Clyde Lewis had done a kid strip for NEA in the 1930s called Herky, but his specialty seemed to be one-shot gags, as in another NEA series called Hold Everything.  In May 1940, he moved over to King Features doing a similar opus called Snickeroos. There, among some recurring characters like a hobo and two old maids, one stood out: a small fellow drafted into the army.  In an inspired move, the panel was renamed Private Buck, and followed his adventures exclusively. 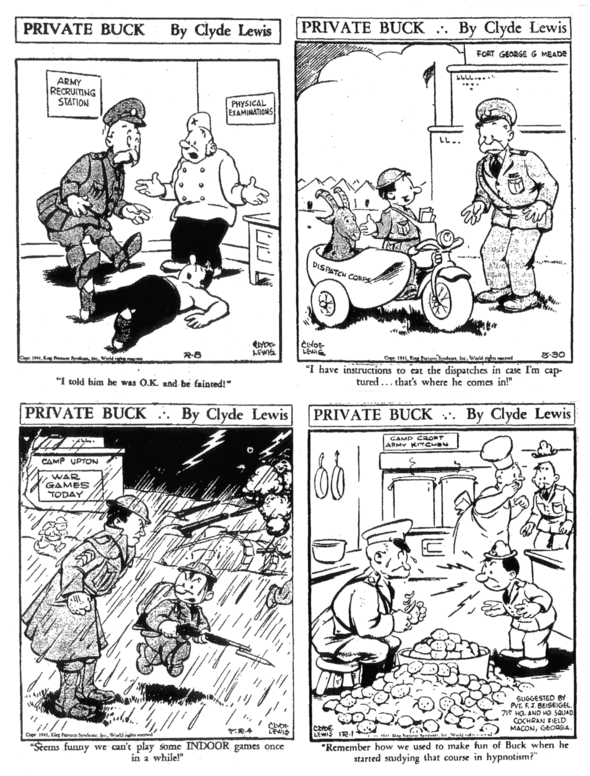 Buck had all the standard camp life problems: chow that was too bean-oriented, uncaring quartermasters that issued misfit clothes, endless K.P. duty, etc. The other characters included a pompous general and a mean sergeant to boss Buck around, and a large fellow known as Fatso as his best friend. (After the war, Fatso even had a spin-off series of his own). In the early going, Buck had a wife that could visit him, but eventually she was conveniently forgotten so Buck could have girlfriends. 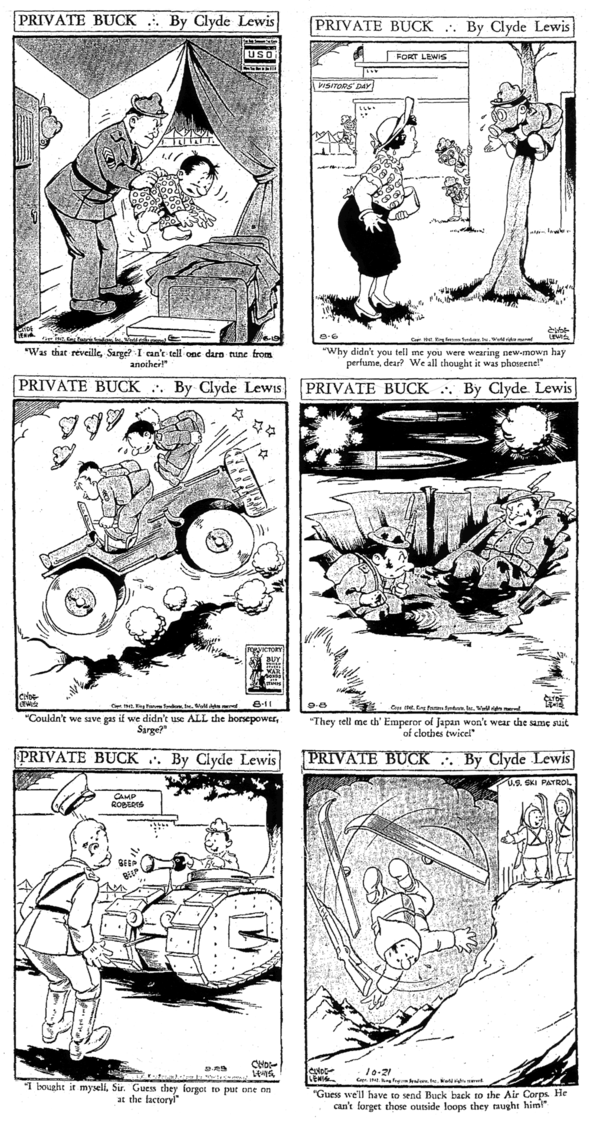 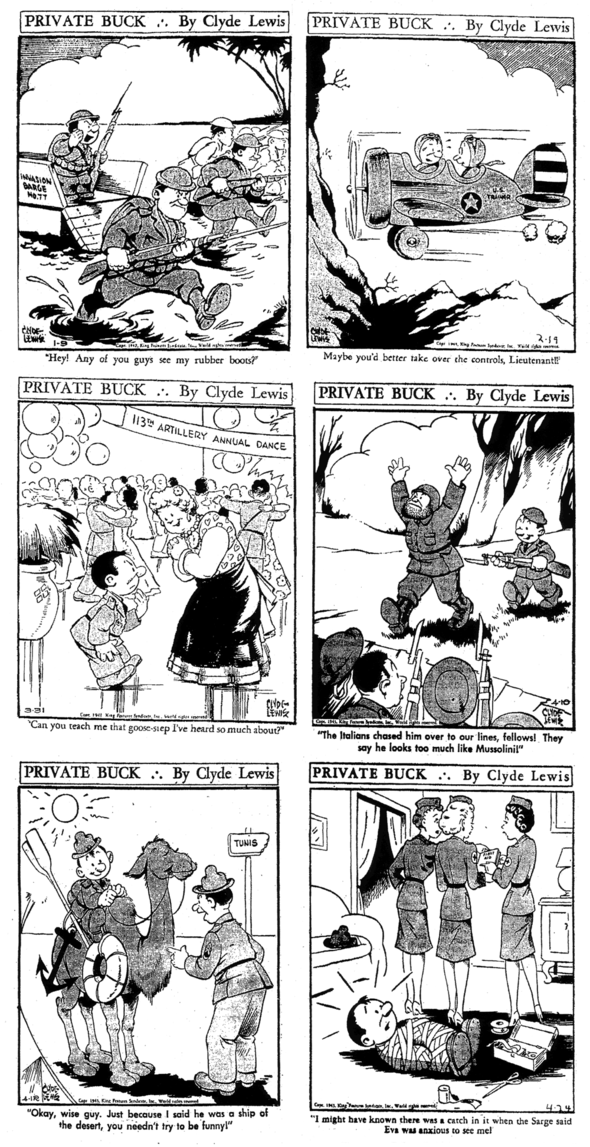 When the U.S. entered the war, Buck joined in fray. Lewis also went into the army, eventually working on the service newspaper, Stars and Stripes. He was in good company, serving with other cartoonists like Dave Breger, George Baker and Bill Mauldin.

The locations in Private Buck were strangely fluid. In the training camp days, Lewis seemingly wanted to please everyone by making it seem as if Buck was working at specific military bases: he labeled the cartoon with names of places like Fort Dix, Camp Haan, Army Air corps flight training school, etc.  After a while, a shorthand building would carry the designated locality’s name. It sometimes looked huge, like the Chicago Merchandise Mart, or the walled fortress of Lhasa, incongruously looming in the background. 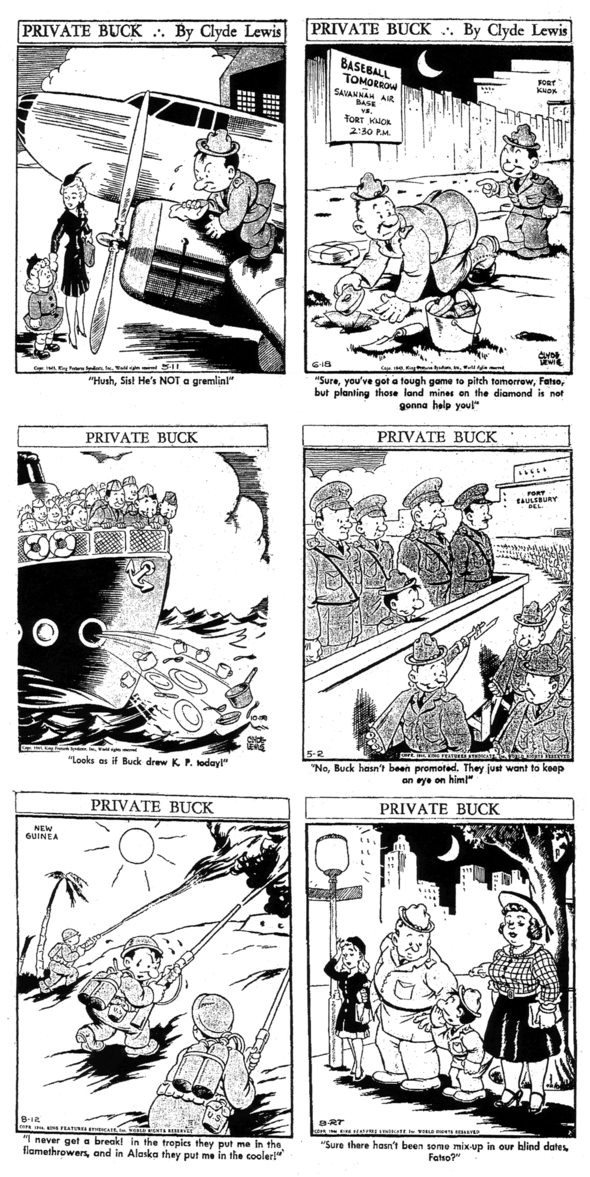 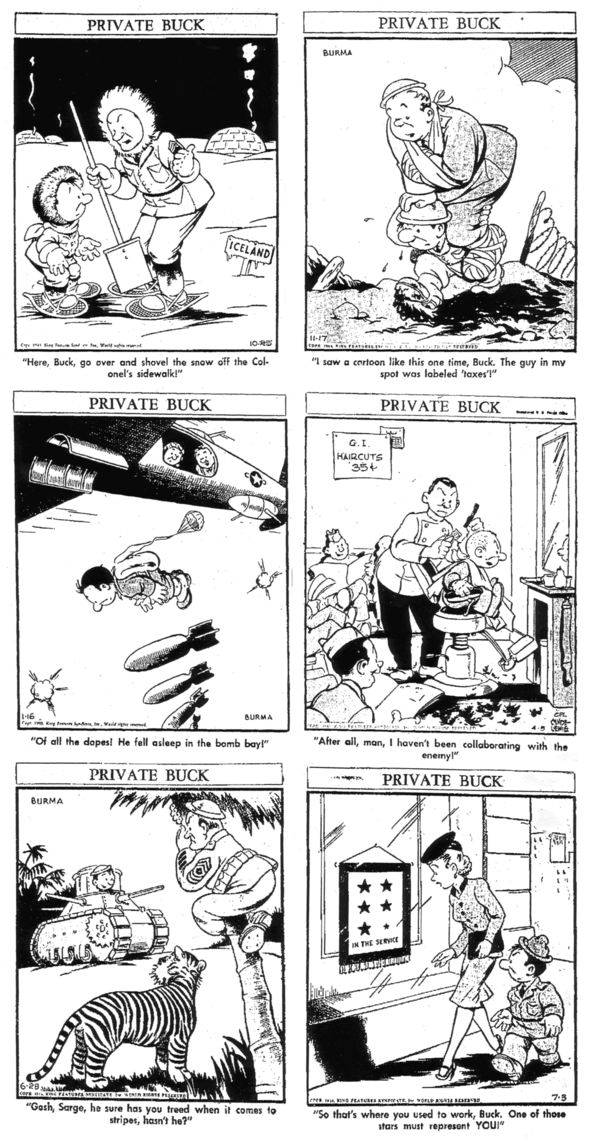 In the same vein, when Buck left to fight the war, he could appear on any front on any day, something the other cartoonists in uniform did not do. In a way, one can see that maybe Lewis did not get so much inspiration from the war in front of him as the others did, and relied more on his prewar gag files.

After the war, Buck left the service and became a civilian with an office job. The title changed to “The Private Life of Buck,” which never really caught on, ending in 1952.  Fatso left, too, and for a while had his own spinoff series in 1947-50.

Now, on to responses to last week’s comments:

The Tiger comic strip has been going for fifty years, but the comic book only lasted six issues in 1970-71.

GRIT was a lot different back when it ran comics, it was like an old-fashioned Sunday paper from a rural Midwestern state. But now it’s a slick paper bimonthly with recipes and health and gardening tips and “lifestyle” essays. Same thing happened to Yankee, or Reader’s Digest. They’re the kind of magazines that seem destined for the doctor’s waiting room.