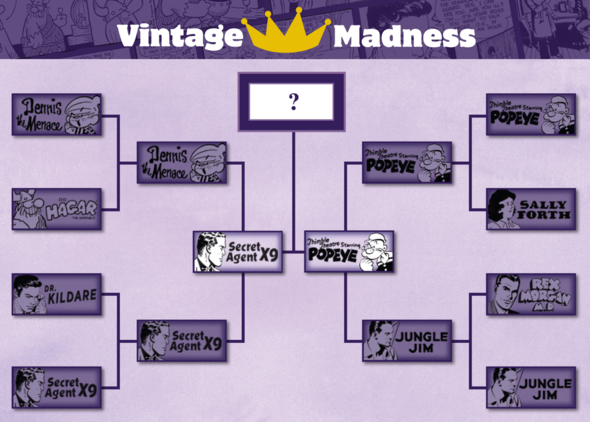 It all comes down to this! After weeks of fierce competition and a couple of too close to call nail-biting finishes, the final two contenders in Comics Kingdom’s 2015 VINTAGE MADNESS have been selected by user votes. The stage is being set and the battle is about to begin for (drumroll please) … SECRET AGENT X-9 and THIMBLE THEATRE (Starring Popeye)!

Are these two contenders evenly matched? Let’s weigh them in and see!

Secret agents have been a long and familiar comics fan favorite since the 1960’s, with heroes ranging from James Bond to Maxwell Smart. However long before them, a pioneer in the genre was X-9, created by Dashiell Hammet. Secret Agent X-9 was very mysterious, working out of the limelight, in classic spy-fiction style. Fortunately, he worked with the FBI against criminals and unfriendly nations. Read more about “Secret Agent X-9” here.

As for Popeye, he is the tough guy sailor who can take on all adversaries — from witches and cavemen to rioting mobs and space creatures. So far, Popeye and the power he yields from his can of spinach has defied all odds against fists, guns and even magic! But, will it be enough? We can’t be sure of anything in the current battle that pits him against the wily G-man.

You can, however, help steer events, by voting for your favorite comic choice today!

Voting for this final round begins on Thursday, April 16th and runs through 11:59 p.m. on Monday, April 20, 2015. Next Thursday, April 23rd, the comic with the most user votes will be announced as the winner of the 2015 VINTAGE MADNESS and soon added to Comics Kingdom’s Vintage Comics line-up.

Thanks for playing and don’t forget to share your thoughts on the final two contenders in the Comments section!

To Andrew Joseph Mansell:
The strips we’ll offer are:  Secret Agent X-9 starting in 1936, and on from there. Our archives are very good, but unfortunately, not 100% complete, so we’ll run only complete stories. It’ll be worth it. Popeye will start with a 1939 Doc Winner story, and go on to the Zaboly/Sims era.

To kmaudam:
The titles selected are designed to appeal to the most readers. It’s true that some of these have been reprinted in book form, but they are not available online yet. It’s true that Alex Raymond’s strips have, in fact, been reprinted multiple times, But, we will offer the further “Jungle Jim” and “Secret Agent X-9” strips after his tenure. The others, we’ll consider at another time.

To Cephasatl:
I agree, “Red Barry” was an exciting continuity, and I would offer it in a minute. But sadly, the holdings in the archive are little more than a few random samples.