Comics Kingdom’s 2015 VINTAGE MADNESS competition rolls on with the playing field narrowed down to the final Royal Four contenders! Last week’s round featured a dead heat between “Dennis the Menace” and “Hägar the Horrible.” The pint-sized troublemaker emerged victorious over the fearsome Viking by a handful of votes. Better luck next year, Hägar!

So without further ado, I present the final Royal Four contenders to you!

In the first matchup, the contenders you’ve chosen are: Secret Agent X-9 vs. Dennis the Menace.

X-9, or Secret Agent Corrigan, is famous for his work as a respected FBI man, sometimes even seen conferring with J. Edgar Hoover himself, making a name for himself in the war against crime.

Dennis the Menace has been in constant trouble for more than 60 years. He is the definitive naughty little boy of the comics. 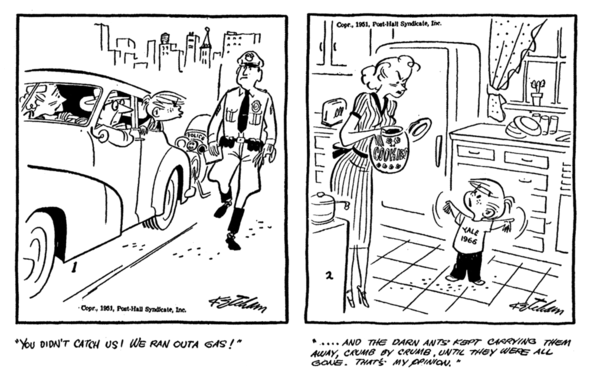 At first glance, it would seem this odd pair has little to do with each other, but maybe they are on more equal footing than most fans realize. It’s generally unknown, but your Archivist, through the FOI act, located documents that show Corrigan once broke Mr. Hoover’s living room window when playing stickball with the other neighborhood agents in the empty lot next door, resulting in his being demoted down from X-8 to X-9.

Also found was that Dennis was given a special commendation for his testimony against the KGB spy ring operating in Mr. Wilson’s garden shed.

Now, for our second heat, we proudly announce the match up between “Jungle Jim” and “Thimble Theatre” featuring Popeye.

“Jungle Jim,” the classic great white hunter in the Edgar Rice Burroughs style, goes through amazing stories in wondrous, exotic locales barely touched by civilization — where the law of the jungle prevails. The sort of adventures that wouldn’t be possible today.

In “Thimble Theatre,” Popeye is a world class adventurer as well, though his stories are more in a humorous vein, often dealing with his fellow castmates and their whimsical obsessions.

These two characters have one thing in common — they both fearlessly go into strange territory and risk all sorts of dangers. Jim faces death at the hands of poachers or unpredictable tribes hiding in the uncharted wilderness of Africa and southeast Asia. Popeye often confronts strange visitors, odd competitions and various frightful monsters.

The big difference is that Jim thinks and fights his way out of trouble, and Popeye pretty much relies on brute strength, and occasionally magic, when he’s in a jam.

So place your votes now! Voting for this second round begins today and runs through 11:59 p.m. on Monday, April 13, 2015. On Thursday, April 16th, the two comics with the most user votes will move on to the final round of Vintage Madness. Users can check this page each Thursday and visit Comics Kingdom’s “Ask the Archivist” blog for updates and announcements on the contenders that are advancing to the next round. The final comic with the most votes will be added to Comics Kingdom’s Vintage Comics line-up.

The last comic standing will earn its place in the pantheon of Vintage greats. The losers will retreat to their dusty lairs to plot a comeback in the next Madness season!