Bizarro is brought to you by What Could Go Wrong?

My blog has been wonky for days which is why I’ve been absent from posting last week’s cartoons but now I’m happy to say it’s feeling better. 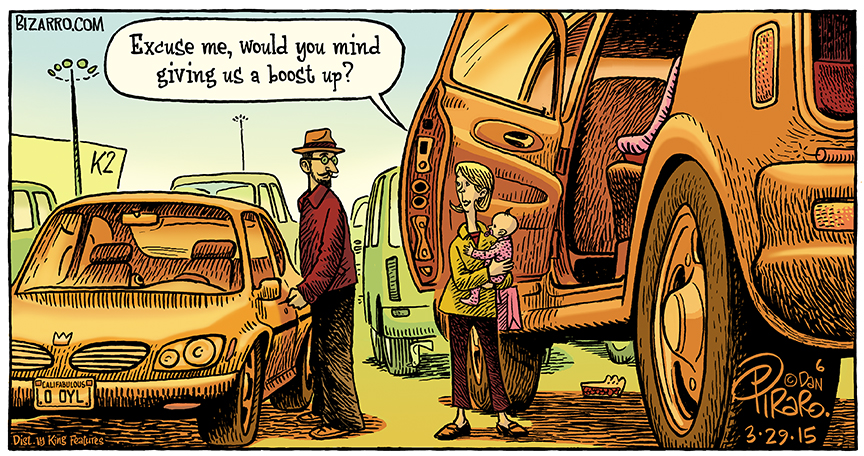 Yes, that’s me in one of my Hitchcock-inspired cameos (click the image for a larger view) engaging with what is one of my pet peeves: people who consume more resources than necessary in an increasingly fragile environment. You readers outside the U.S. may not realize that American families with one or two kids in a giant, condo-sized SUV is the standard in America. It’s fairly unbelievable how many of these behemoth vehicles there are on the road and equally incredible how few people actually need them. Now, you may be saying, “I need mine –– I have two kids and groceries and strollers and sports equipment, and…” but what you actually mean is “A car the size of a school bus is convenient for dragging lots of crap around all the time but I could do with a small stationwagon or hatchback like everyone else in the rest of the civilized world does, and everyone in America did before SUVs became standard.” Just a friendly, preachy reminder that we’re all in this tiny, sinking boat together and putting your own comfort and convenience ahead of the entire species is maybe not the best way to go. 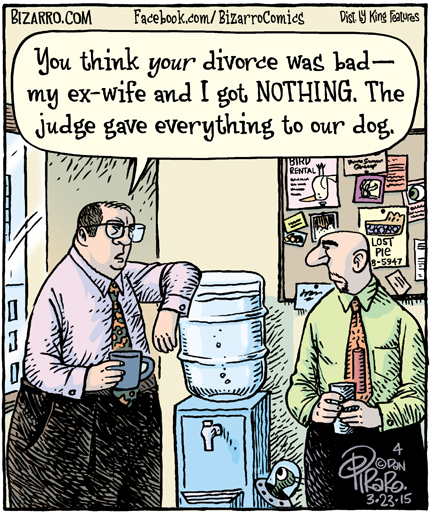 As for the rest of the week, we start with Monday’s cartoon about a couple of guys talking about their divorce scenarios. This is a gag that I drew from personal experience since I’m currently still battling my ex-wife in court, after more than 3 1/2 years. You’d be surprised how little the courts care about justice in divorces. If I hadn’t been raised better, I’d have taken hostages over it by now.

Tuesday’s gag was about a guy with an interesting job. It occurred to me after I drew this character that he looked like a young version of the actor who played “Mike” on Breaking Bad and the same role now on Better Call Saul. Total accident, though.

Wednesday’s gag is about another personal pet peeve of mine in the form of people talking at movie theaters as though they were watching at home. Just another reason why I don’t carry a gun. (And there are many reasons.) 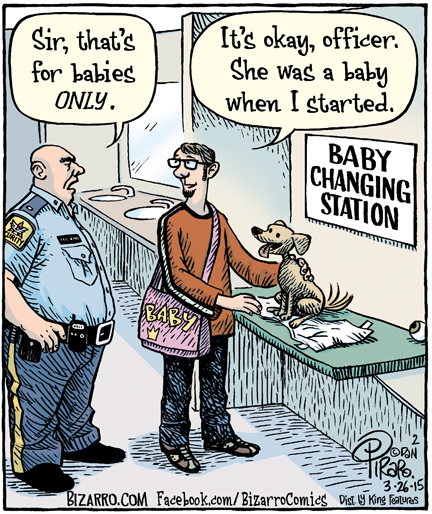 Thursday’s papers had this cartoon about changing babies. What you change them into depends on your own skill level, but just about anything would be easier and cheaper than raising a human child. I know, I did it twice.

I really like Friday’s gag about the conjoined twins (formerly called “Siamese twins because the most famous pair of them was from Siam, a country now known as Thailand.) I am known among my friends as one of those annoying “grammar nazis” but I got tagged by a grammar nazi reader of mine who told me a birthday cannot be belated, only the greeting can be. So this should properly have read, “belated happy birthday,” not “happy belated birthday.” Damned grammar nazis. 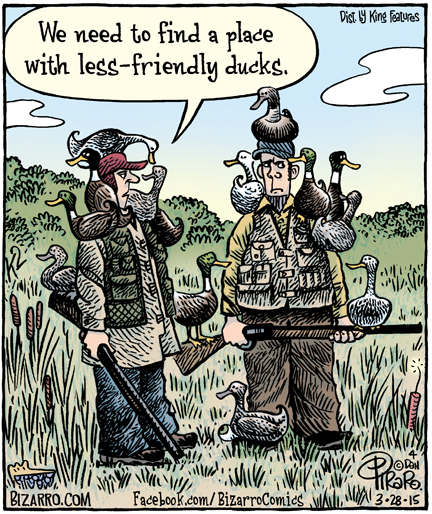 Finally, Saturday’s joke is about clever ducks who defeat their enemy with kindness. I came upon this idea when watching an old cowboy movie in which someone was terrorizing someone else with a bullwhip. Whenever I see this I always wonder why the person cowering doesn’t just walk up to the person with the whip and stand next to them. Whips are useless without the distance necessary to use them, which is considerable.

That’s it for now, hope you’re having a Jazz Pickly week, JPs!