Ask a Cartoonist: A Trip to the Cartoon Graveyard

Paul Simon immortalized the strife of every great cartoonist in the song “You Can Call Me Al,” when he said “Don’t want to end up a cartoon in a cartoon graveyard.”

Well, here at King Features, the cartoon graveyard is vast: for every idea that sees print, most cartoonists have at least two others that don’t make it to the big time.

One of the questions fans ask us most is if they can see some of the comics that didn’t make it– and why those comics don’t make it to print.

Reasons? Well, sometimes something is hilarious in your head, and then you look at in on paper, and realized it doesn’t work as well as you’d hoped. Sometimes it’s too complicated or confusing to make a good four-panel strip. But sometimes a comic is funny or on point, and just might be a little too risqué for a broad readership, or might be a potential lightning rod for controversy. While those decisions sometimes come from Editorial, it’s often the cartoonists making a decision themselves to pull a strip– or not even finish a strip– that might be too naughty for newspapers.

Here’s a recent one that went straight to the “graveyard” . . . perhaps Brendan thought it would start “WWlll” ?!  . . . We thought it was hilarious (and Susie is Jewish 😉 !

I created these two strips in 2008 for “Safe Havens,” when Samantha was still the dorm’s resident advisor.  The purpose was to show Samantha dealing with a real-world issue for a student, that of a pregnancy scare, but Brendan correctly assessed that it broke the strip’s aura of light fantasy.

(I personally ALWAYS make this mistake when I’m going to the doctor.  Cream cheese is just so more pleasant.  –Tea) 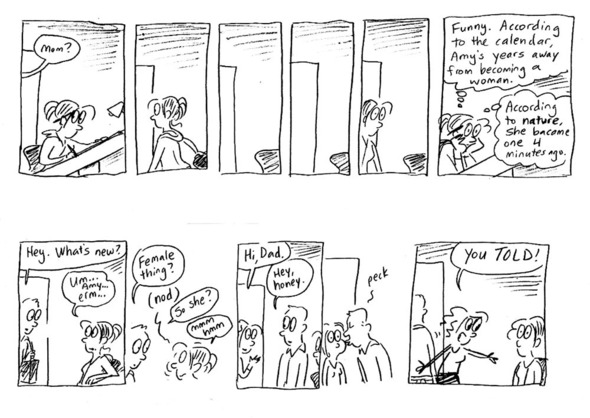 My older daughter once had me nix a series about Amy getting her period for the first time. I can’t imagine why. Here are two of the rough drawings. 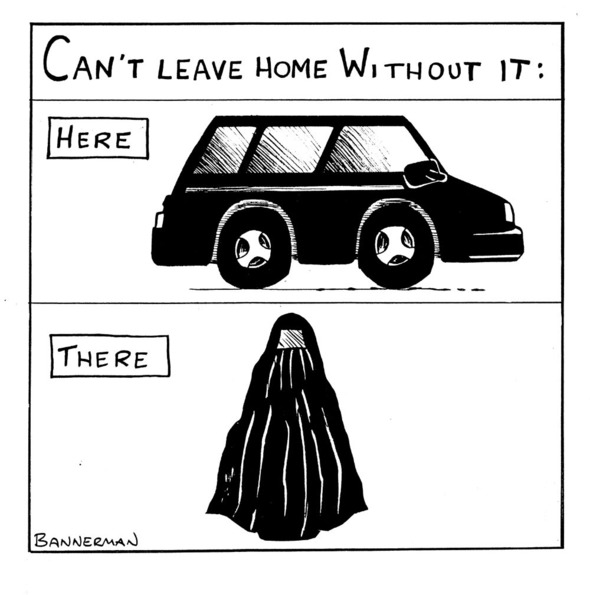 I ended up sort of self censoring this cartoon depicting a burka because as a religious piece of clothing, it could be seen as a religious symbol, and I didn’t want to offend anyone.

Every now and then a strip doesn’t quite work, or approaches a certain line for newspapers… here’s an example of one of my roughs that didn’t quite make the cut as it was just a liiiiiiiiitle too risque. Heh. 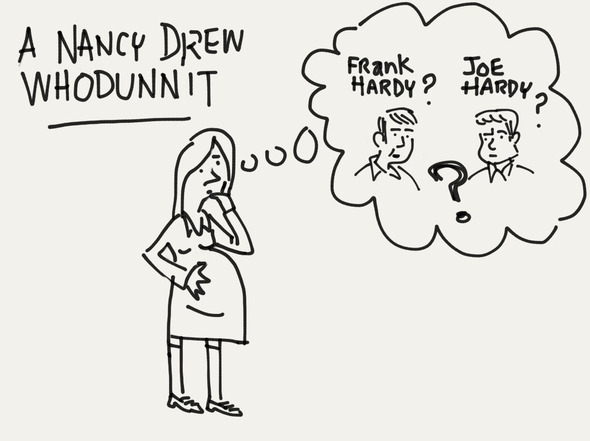 Every now and then I get an idea that I know — right from the outset — won’t get past my drawing table. But that doesn’t mean I won’t at least sketch it out, and try. I couldn’t resist this Nancy Drew mystery cartoon. But alas, “Six Chix” was not the appropriate place for it.

Last year, Brendan rejected this strip from Bud Grace, along with two others.  While it ran in Europe, it was determined that it was crossing the line for US papers.  When a strip gets rejected, the cartoonist has to draw a replacement comic.  Naturally, Bud did what any hard-pressed cartoonist would do, and replaced the strip with a strip of Brendan strangling him.  That replacement strip now hangs over Brendan’s desk!

We used to argue with Jay Kennedy over using three words at the heart of a teenage boy’s vocabulary: bites, sucks and blows. Those words, pablum to the rest of the culture, still bring newspaper editors howling through their curly-wired landline phones.

By now we seldom waste our time drawing up ideas we know won’t pass the syndicate’s standards, so we don’t have a drawerful of rejects. But outside the comics page we sometimes push the envelope.

We decided that Epic Zits would be a good title for one of our annual book collections. Here’s a cover rough we considered.  Look, we know this kid intimately. He’s been a teenage boy for seventeen years now and never had a single boner. Give him a break.

We at Team Dustin share our scripts with Brendan before drawing gets underway, so we don’t have many finished killed strips. This one, from the first year of “Dustin,” made it past the review process enough to be drawn before Brendan decided to pull the plug. 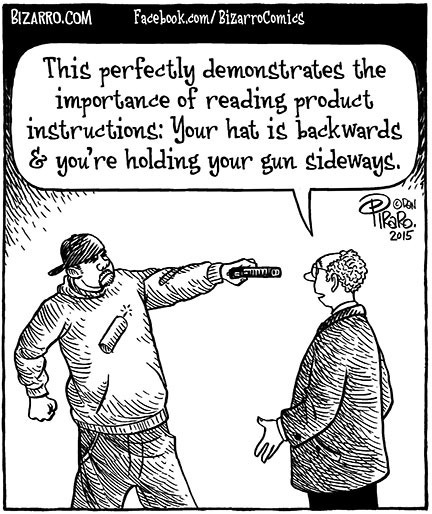 I think this is a funny gag but our nation’s problems with handguns has led people to be superstitiously afraid of them in comics, thus the pretty-much industry-wide ban on cartoons that show guns. The logical solution would be to remove actual handguns from society instead of banning people from making jokes about them in drawings, but institutions runs by humans aren’t known for sensible solutions.