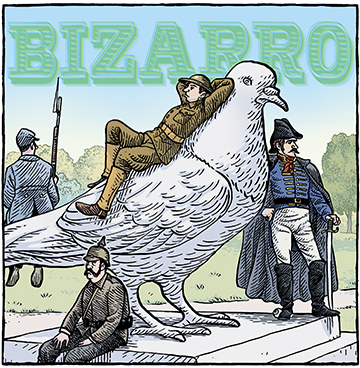 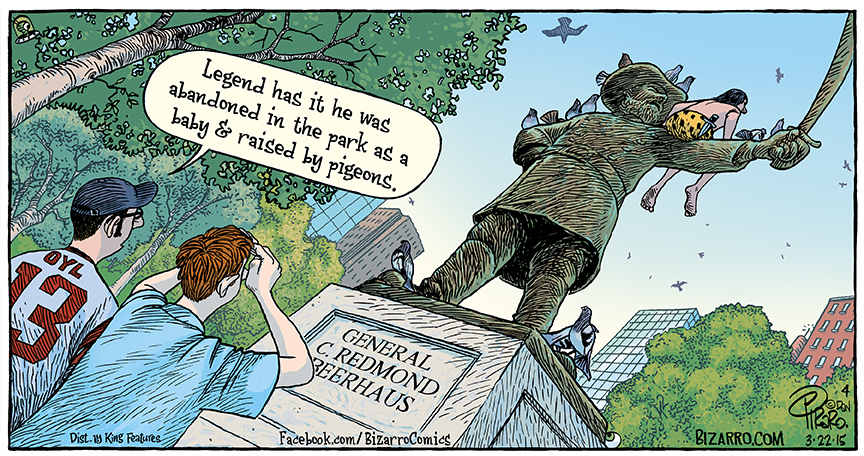 (Nobody will mind if you make these cartoons larger by clicking them. Try it. You’ll see.)

Bizarro is brought to you today by Horseracing Cheaters.

Last Sunday I published a cartoon with soldiers on a statue of a pigeon (this week’s title panel was constructed from it, in fact!) so this makes it two Sunday’s in a row that I’ve featured a cartoon with a human on a statue. This kind of thing often happens to cartoonists; one idea leads to another idea in the same vein. I like this one about Tarzan being raised in a city park instead of the jungles of Africa. The perspective was fun to draw and it has a few behind-the-scenes aspects that truly dedicated Jazz Pickles might find interesting: The statue’s plaque features a name that is similar to my fiance-in-law who is an award-winning brewmaster, the speaking character looks more-or-less like me a couple decades ago, the name on the back of his jersey refers to my lovely life partner, Olive Oyl, and the 13 is my daughter’s birth date (the one engaged to my fiance-in-law.) Lastly, more observant readers will notice that I tucked Tarzan’s loin cloth beneath him, thus obscuring an unpleasant view. You’re welcome. 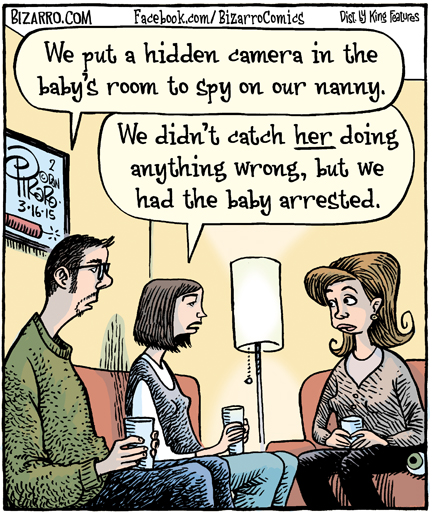 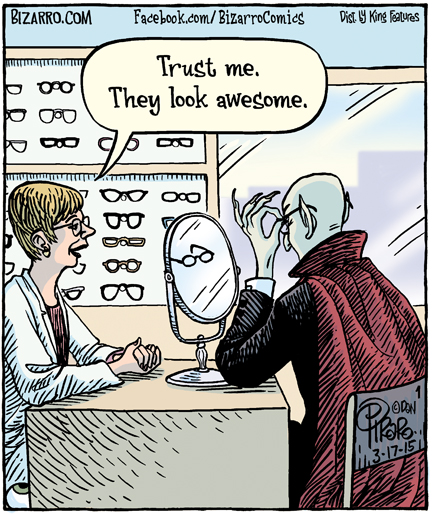 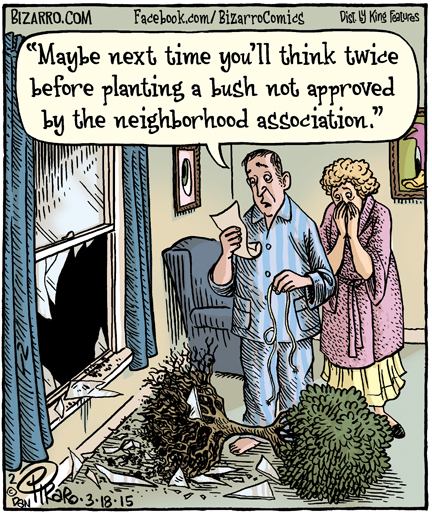 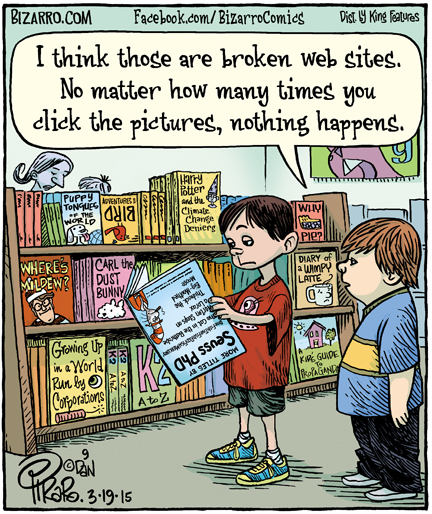 Earlier this week (or “last” week, if you consider Sunday to be the first day of a new week) I published some other cartoons which you may notice floating in the space to the left of this text. I’m particularly fond of the parents who found their investment in a hidden video system worthwhile, though not for the reason they thought they would.

In this vampire cartoon I chose to draw a Nosferatu style character, though he’s wearing the traditional Hollywood Dracula outfit so he’s a bit of a hybrid. I regret that I made it look like daytime outside the window; that breaks the rules of vampires and was an absent-minded mistake on my part.

This next cartoon was born from my thoughts that living in a community controlled by a neighborhood association would for me be barely one step above prison. I have a lot of trouble with people who need this level of control over others.

I particularly like the bookstore cartoon, but more for the books on the shelves than the main gag. At this resolution you likely won’t be able to read the back of the book the kid is holding so I will tell you it says this: More titles by Seuss PhD, One Fish Two Fish Red Fish Mercury, The Cat in the Bathrobe, Horton Steps on the Lorax, Thidwick the Big-Mouthed Moose. The book on the lower right corner of the shelf says, A Kid’s Guide to Propaganda, and the large yellow one on the top shelf is Harry Potter and the Climate Change Deniers. I’ve also included the horizontal format of this gag (which I now only do when it shows something different or interesting that the vertical version does not) has one extra book on the far left called Bizarro Among the Cabbages. I once published a book titled Bizarro Among the Savages, which is long out of print but you can possibly still find one on the Interwebs somewhere.

I have little to say about these last two comics other than that I think they are humorous.

I hope you had a good week, Jazz Pickles, and I wish you a good week to come. Olive Oyl and I are settling in nicely in our new digs and almost everything is unpacked. The house is small and humble but we think we’ve made it look pretty cool and cozy inside.