This week, Kurt Kolka, Comics Kingdom guest blogger and author of “Bullying Is No Laughing Matter,” takes an introspective look at bullying on the comics pages and picks his collection of comics on bullying. When I was a kid, I was bullied quite frequently. Reading comics in newspapers and comic books were my escape from the fear I felt.

In today’s “Take it From the Tinkersons,” we see Tillman Tinkerson having another snappy comeback for his bully, Kyle, and being able to walk away from the situation. Tillman also exudes confidence as he faces his bully, another plus. Studies in bullying have shown that kids who do not show their fear and can make jokes about a bully’s remark, showing they are not hurt by it, often can walk away as Tillman does. Bullies like to see fear and hurt from their victims. When this is taken away, there is no longer a reward in bullying.

If you’ve been reading comics for a while, then you know, like I do, that bullying has been an essential part of some comic strips for years. The relationship between Dagwood and Mr. Dithers in “Blondie” comes to mind immediately. We’ve seen it played out with hilarity many times. 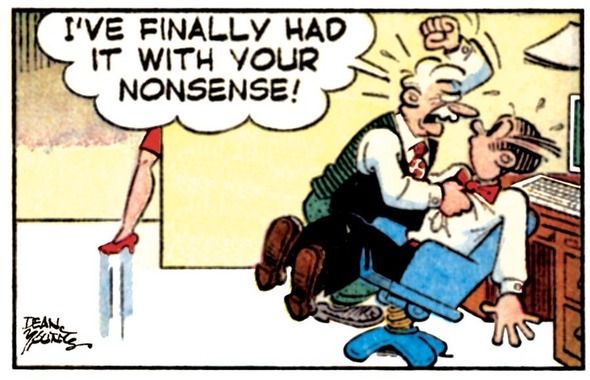 Another strip we’ve seen bullying behavior is in “Beetle Bailey.”  There were endless strips which could have been used inside the bullying book, but this one stood out. Why? Because it shows the difference between comic characters and the real world. Comic character return to normal the next day; real people may not. Physical wounds will heal in time, but emotional ones not so easily.

This artwork which Ron Ferdinand donated inspired a whole school!  Miller Elementary School in southeast Michigan used the idea of a “Fence of Friends” to create a whole anti-bullying assembly.  Projecting the Dennis the Menace comic posted on our website on to a wall, they had the children create fence boards with their names. Each board touched another’s whom they were friends with (even teachers), creating a fence of friendship. 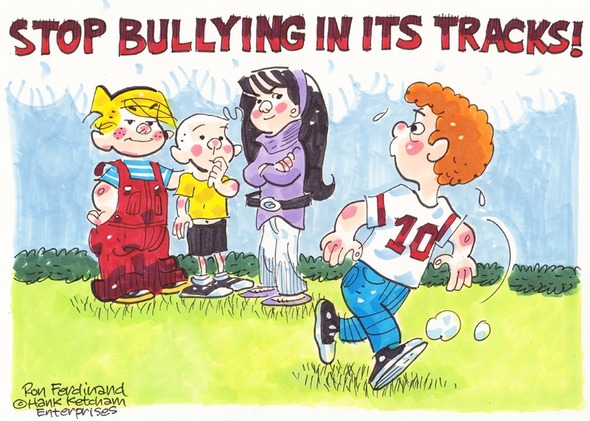 Back in high school in the ’70s, there was one strip everyone was talking about — “Funky Winkerbean.” Students sat around the newspaper racks in the school library discussing what was happening in Funky’s world regularly, and the same types of situations which were happening in our world at the time.Today is no different. This strip donated by Tom Batiuk is yet another example of how our world is affected by bullying.

I remember when I was growing up, my Dad always had to read “Judge Parker” before he allowed me to read the comics section. He loved it so much that I got an original piece of “Judge Parker” art signed by former artist Harold LeDoux for his 80th birthday several years ago. When I sought out comic creators for the anti-bullying project, writer Woody Wilson was one of my first contacts. And, he was glad to help us out.

The first comic book my grandfather bought me as a kid was “Batman” drawn by Joe Giella. Joe was THE “Batman” artist for many years during the ’60s and ’70s. Only in recent years did I learn he was still drawing and that he drew “Mary Worth.” While I didn’t correspond with Joe for the book, I did with writer Karen Moy. She not only helped supply me with the strip for the book, but she was a constant encourager to me throughout the whole process of putting the book together. Between the influences of her and Joe, they have now endeared me to “Mary Worth” on a daily basis as well.

I hated “The Pajama Diaries.” That’s because it had replaced “Judge Parker” in an area newspaper a few years ago. Of course, this was before I had even read “The Pajama Diaries” or corresponded with cartoonist Terri Liebenson. It was when Terri submitted her strip for the book, I felt I had to check out her comic. Terri’s sincerity as an artist and comic creator soon won me over. Not long after her first contact with me, I added “The Pajama Diaries” to my favorites list at Comics Kingdom. Recently, as I’ve become a freelance writer and artist, I have come to appreciate the dilemmas faced by her character, Jill, even more.

In 1969, my sister bought me a Phantom comic book when I was sick. The Phantom was known to take a stand against bullies. Here is a short story from a Gold Key comic book where The Ghost Who Walks assists a boy being bullied. The Phantom shows this boy what we see on the outside of a bully is not what is going inside. Bullies are often fearful and insecure, choosing to pick on others to satisfy their need for power. 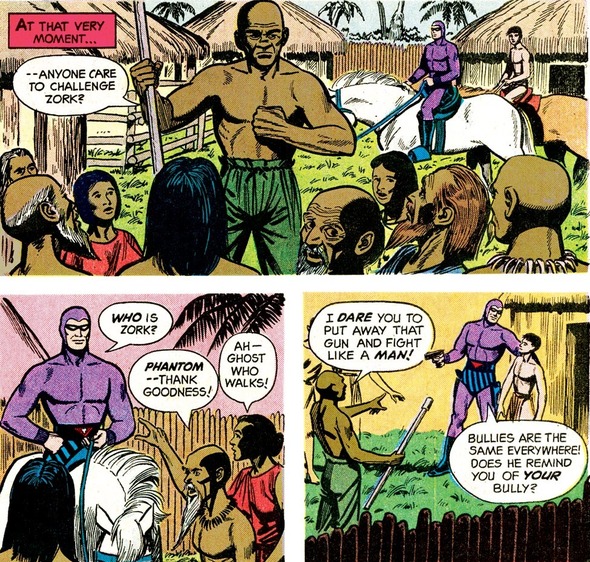 Just before “Bullying is No Laughing Matter” went to print, Woody Wilson contacted me to let me know he was doing a subplot in his “Rex Morgan, M.D.” strip about bullying. So, while this strip didn’t make it into the book, I thought it would be great to include in today’s blog.

Of course, the book “Bullying is No Laughing Matter” contains many more comic strips than those shown here, some from the 1930s and ’40s even. It took two years to put the book together and contains not only comics but words from the comic creators themselves (some even share how they survived bullying as kids!). So, I hope you’ll consider checking my book out!

To learn more about “Bullying is No Laughing Matter” or to purchase a copy, check out our website at www.BullyingIsNoLaughingMatter.com.  The website was not created just for children and teens either. Teachers and other youth workers can make use of its comic strips for presentations and discussions on bullying.