This week, Comics Kingdom is delighted to welcome freelance writer and cartoonist Kurt J. Kolka as our Guest Blogger. Author of “Bullying Is No Laughing Matter,” which incorporates the work of seven King Features cartoonists among others, Kurt comments on a new anti-bullying series making its debut this week in Bill Bettwy’s “Take It From The Tinkersons.”

This is Kurt J. Kolka and I get to be your Guest Blogger for this week at Comics Kingdom. I’m a freelance writer and cartoonist.

Like all of you, I also am a huge fan of King Features comics and was recently honored to partner with King Features and other syndicates in creating  the book, “Bullying is No Laughing Matter,” featuring comic strips and their creators from around the globe dealing with this important issue!  These included Beetle Bailey, Blondie, Dennis the Menace, The Phantom, Judge Parker and other King Features characters. 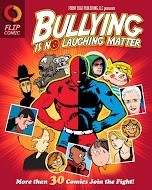 It is because of my association with this book, KFS asked me to step in to introduce a series of comic strips on bullying by Take it From the Tinkersons creator, Bill Bettwy, which makes its debut this week.

After being given a sneak peek at Bill’s strips, I was impressed in more ways than one. It is one thing to take a serious issue like bullying and get readers to laugh about it, but it something else to also provide responses to the bully readers can use.  As I read over Bill’s strips, that is exactly what I saw — ways to respond to bullies.

Another response I had was jealousy. Why couldn’t Bill have thought of this two years ago when I was assembling comic strips to use in “Bullying is No Laughing Matter”? These strips would have been great to use!

Fortunately for you, the Royals of the Kingdom, this is your lucky week! You get to see them beginning today!

Tomorrow, we’ll look at the another of the Tinkersons strips, plus some of the strips used in the book, “Bullying is No Laughing Matter.”

To learn more about this book or to purchase a copy, check out our website at www.BullyingIsNoLaughingMatter.com.