Oh, boy! My very favorite day — Friday the Thirteenth — is nearly upon us!

I’ve never been much for superstitions, although I personally believe that eating a pint of ice cream for dinner is always good luck.

If you’re the type to keep your umbrellas shut indoors, avoid cracks in the sidewalk, and salute your local magpies, then today’s blog post is just for you! I’ve asked all of our cartoonists to share THEIR personal superstitions– or tell us what their characters are superstitious about!

There was one time, before Tina’s Groove, when Jay Kennedy — the comics editor at King Features at the time — had offered me a contract to draw someone else’s strip. It was pretty much a done deal, and Jay was about to Fedex the contract. That afternoon I had taken a walk when the blackest cat you ever saw darted across my path. The cat even looked at me. I continued walking, but with a sick feeling. “I’m not going to get that job,” I told myself. Jay called the next day to tell me that the writer of the strip had made a complete about face, and had changed his mind about collaborating with an artist. However — was this “bad luck”? If I hadn’t lost that job, I would not have created Tina’s Groove!

Mr. The Toad doesn’t believe in superstitions. He just exploits those who do. (the blather he oozes is word for word from a real cult pamphlet)

My grandmother and all four of her daughters were very superstitious. Black cats, walking under ladders, breaking mirrors and stuff like that. My Aunt Mae would never exit a building through a door she didn’t enter through. A little of it rubbed off on me, I guess. I can’t spill salt without tossing some over my left shoulder. And I do a lot of knocking on wood. It all stems from my grandmother who was certifiably nuts. She’s the one who kept the pet black widow spiders.

I’ve never been a very superstitious guy, because I believe bad luck will find you if it’s determined enough. And trying to prevent it through the use of a rote ritual only makes it angrier. Then it turns into revenge luck. Which is bad. Revenge luck hurts you, films it, then texts it to all his friends.

So rather than buy into crazy superstitions, I just let life unfold naturally, the way Zeus intended it to be.

I am not a superstitious person, with one rather boring exception. If I am taking a walk and it’s not a loop, but a forward and back, I HAVE to tag something- a tree, a sign post, anything–when I get to the turn around spot. 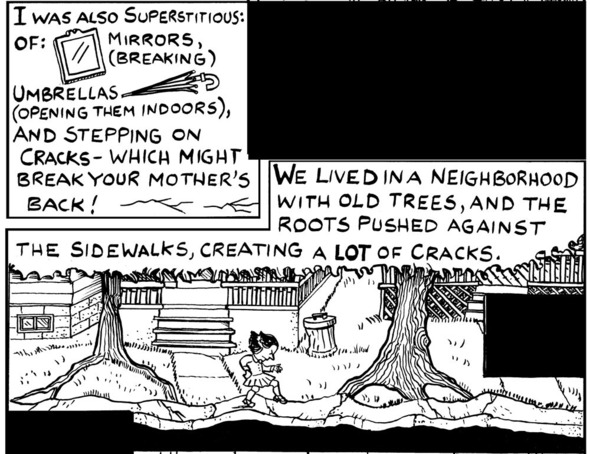 This image is an excerpt from a short story I did for Mike Lynch’s 6th issue of “Raconteur”, available here.
As a kid, I was particularly superstitious about cracks in the sidewalk. But honestly, walking to school without stepping on any cracks was probably just a way to make a boring walk more challenging.

In this cartoon, the character is torn by her indecisiveness towards whether or not to pick up a penny that is tails up. I don’t know why, but I’ll leave a penny if it’s not heads up, or you turn it round for the next person, according to a friend of mine. I’ll also throw salt over my shoulder if it spills. I suppose I (and this lady) should be living in the middle ages!

Okay… I try not to step on the cracks. My mom already broke a hip, I don’t think she can take much more.

For tech-based company, the Fastrack staff can be quite superstitious!

When I was in grade school I felt like I was an outcast.  I was the shortest boy in my class.  My parents were poor and I had to wear the same ratty clothes every day and shoes with holes in them. I was always fighting and getting in trouble.  Several teachers had trouble with me and often would make me spend class-time alone in the closet.  The parents of my only friend told him not to play with me anymore, I was too much trouble.  I felt I was born with a black cloud over my head. I was doomed to lead a troubled life.

After I lost my friend I decided to make some changes in my life and see if I could have a better one.  I decided to stop fighting, stealing and getting in trouble.  I had dropped out of school for a year to draw cartoons and I realized I needed to learn how to write if I was going to be a good cartoonist.  I went back to school but was put back a year and entered a class of strangers.  I was quietly studying and making good grades until one day there was a class election and I was voted the class Vice President.  I was shocked.  I didn’t think anyone even knew me.

That inspired me.  From then on I became active, good-natured, and well behaved, and was elected to everything. I became president of nine different organizations and the Principal ordered me to resign from half of them because he had a boy once who tried to do too much and had a nervous breakdown.  But that didn’t stop me.  I became more active, especially with the girls and everyone else.  But now I was mystified on why I was so popular.  Was it just a different cloud over my head?

What are some of YOUR weirdest and wackiest superstitions?