You may recall last year when we crossed paths with the character Bizzy Buzz Buzz in the Barney Google and Snuffy Smith. See HERE:

I only recently became aware of a prequel to the Bizzy Buzz Buzz saga.

In 1963, the same character that would be Bizzy Buzz Buzz first entered the scene as “Bizzy Bee Smith.” She is obviously the prototype of the later character, one that would seem specially created for the animated TV cartoons to follow.  She behaves in the same way, too,  a tiny tornado of housekeeping fury, driving Snuffy and Jughaid crazy.

In the TV cartoons, Bizzy Buzz Buzz’s clothes appear pretty much as Bizzy Bee’s do, with the plain dress and kerchief, but when she returns in the 1964 newspaper strips with a new name, she wears a fancy pattern.  In the several versions of the doll we went over last year, she wears the plain outfit in at least one size, though even as the large one that could be the prototype, she wears a fancy pattern, yet  labels showing the cartoon likeness show the plain Bizzy Bee. 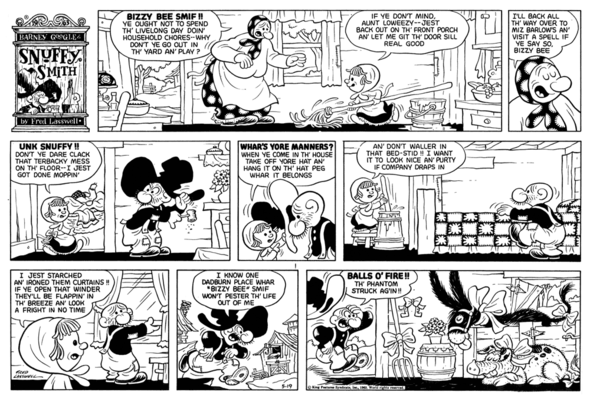 In both comic  versions, cartoonist Fred Lasswell intended that she would be a Smith, implying she came from Snuffy’s side of the family, but in the TV version, she’s a niece of Loweezy. Maybe that indicates a lack of coordination between Uncle Fred and the cartoon producers. 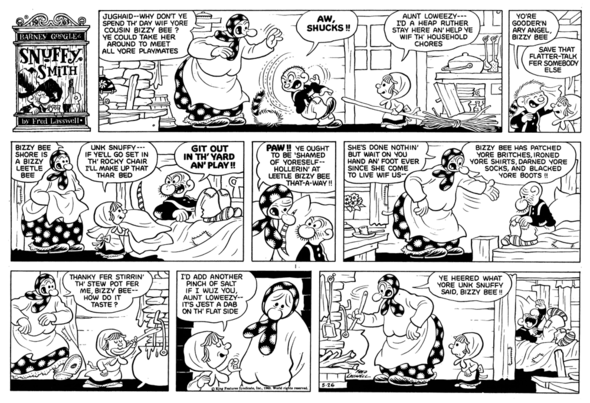 It could be that they were going to go with “Bizzy Bee” at the start, but sometime into the animated project, they had to change her name.  A “Bizzy Bee” at one time was slang for a diner. There’s even a Betty Boop cartoon called Betty Boop’s Bizzy Bee (1932), but most commonly, it does (or did) refer to somebody driven to accomplish many tasks swiftly. It might have been an uncopyrightable term, whereas Bizzy Buzz Buzz was not. As an afterthought, Bizzy Buzz Buzz  tosses out some buzzing noises when she sings, as a lame, but copyrightable,  raison d’étre for her moniker. Nevertheless, as a licensing figure, Ol’ Biz’ was a dud. 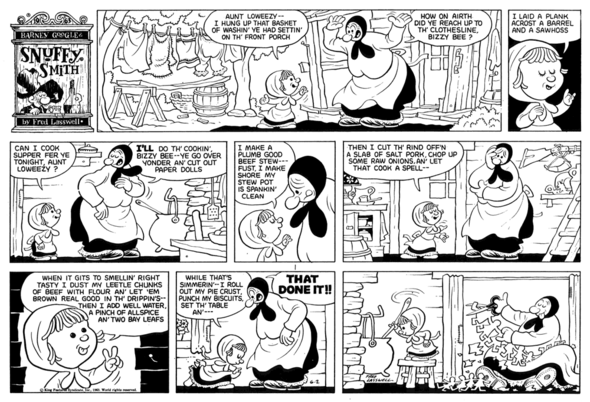 Just as Bizzy Buzz Buzz after her would, Bizzy Bee had a very limited run, lasting only four Sundays in the spring of 1963, and one further strip in late summer. Then the new, improved version ran for three weeks in late 1964. These would be the last anyone would see of her by any name until nearly fifty years had passed, when the current man behind the pen, John Rose, brought her back last year.  So far, no new animation or doll offers have resulted. 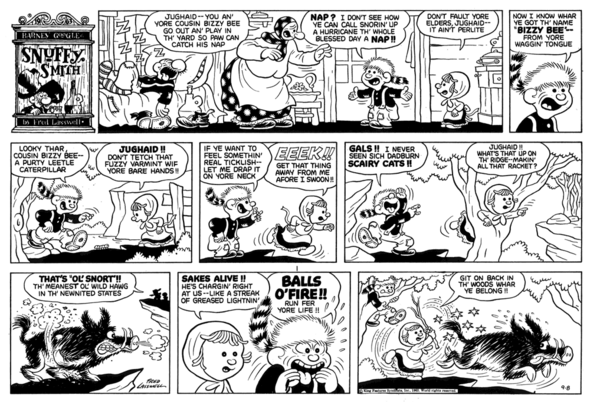 I don’t recall the “Funny Pages,” but I probably did see it. Raquel Welch as Orphan Annie sounds like” Bob Hope Show”-style casting.

I don’t recall the “Funny Pages”, but I probably did see it. Raquel Welch as Orphan Annie sounds like” Bob Hope Show” style casting.

You’re right, and you’re not the only one to correct me. So the Guardsmen are actually TWO hit wonders.

The printing processes used a hundred years ago can be sometimes quite impressive, especially for use on what was considered such unimportant junk as comic art.  Not to say there weren’t some poorly rendered printing jobs then,  but you very rarely see anything like colors out of register until the 1930’s.

NEA’s Eek & Meek was a hot new title when the Fabulous Funnies came about. I recall they were being marketed as  new concept-type humor, being more edgy and cynical than the average gag-a-day strips.

In a way, they didn’t treat comics as a subject worthy of serious scholarship because they couldn’t.  Though they had been around seventy years, to call a look at comics a “History” was perhaps in itself considered a humorous irony. I think the mentality then was that anything that was about popular American culture was frivolous, unimportant fluff. This was so because the producers and the audience lived through most of the years addressed. They were too close to the subject. Comics meant the movies, radio programs and show tunes based on comics were the comics experience for them. Similar attitudes obtained for topics of other specials like automobiles or movies.

So the ideal hook for a good special was nostalgia. The audience wants “Pure Entertainment,” not history lessons. They won’t do any specials about comic strips again, because what our ancestors knew and loved is now part of the deep past, and strips don’t mean the same to people since the 1960’s.  Hollywood makes few films or TV shows based on strips, there’s no tunes or radio shows either.

The show had some cartoonists with sound  bytes, Chic Young was seen at his sunny  Florida estate, sitting on a dock, improbably drawing some strips on a pad in his lap, and Otto Soglow had some snappy wisecrack that was supposed to be hilarious. But I can’t remember what it was. TV has, over the years, been just as incompetent at preserving its past, and this special could possibly be lost, but if you go out looking for it, also seek Mr. Mansell’s 1972 special and maybe the dreadful live action 1985 “Crock” special.