First of all, today is Family Circus’ birthday! I wanted to wish Mommy, Daddy, Billy, Dolly, Jeffy, and PJ a wonderful day!

Finally, everybody at King Features was terrible saddened by the loss of Leonard Nimoy on Friday. Growing up here in New York, I remember going to the planetarium and hearing the beloved voice of Mr. Spock describe the Milky Way and the Nebula Galaxy. Even before I fell in love with Star Trek, Leonard Nimoy made me fall in love with astronomy.

David Reddick of Intelligent Life is a lifelong Star Trek fan extraordinaire, and he sent me this photo of himself meeting with Mr. Nimoy a few years ago, while David was writing “The Trek Life” comic strip for CBS. 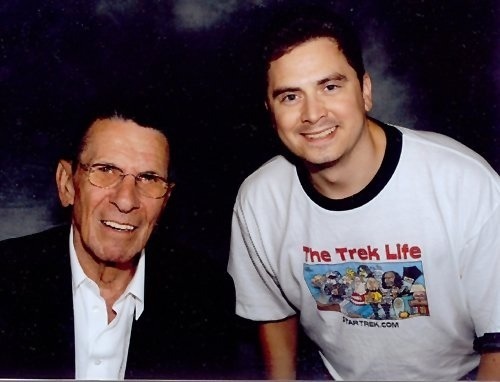 I remember the first time I got to meet Leonard Nimoy at a Star Trek convention.

We were both (along with many other Star Trek stars and luminaries) guests at the largest Star Trek convention in the world in Las Vegas, back in 2006. Leonard. Nimoy and William Shatner were to go on stage for about 45 minutes to a huge crowd of thousands, and I, still newly minted as Paramount Pictures’ cartoonist/creator of “The Trek Life” comic strip for STARTREK.COM, was due to promote the strip and speak on stage after them (no pressure).

I got backstage early, and there was no one else around except for two men standing off to the side… William Shatner and Leonard Nimoy. I stood against a wall and sort of looked over at them here and there, (trying not to be, um, obvious) and Mr. Nimoy looked my way and said “Hey, you there,young man… come here.” (And I totally did the look-behind-me-double-take-pointing-at-myself “who me?” thing). I walked over to them, and Mr. Nimoy asked me my opinion on a photography question he posed to Mr. Shatner, and wanted a third party to offer a differing perspective. That led into about 15-20 minutes of me getting to talk to them both about photography (Leonard was an avid photographer, exhibiting widely, with books, et al), cartooning (he asked me what I did, and was very interested in my being a cartoonist, always maintaining eye contact and asking a lot of questions, which was gracious, respectful and kind). We had a great chat that first meeting, and I was left with an even greater respect for Mr. Nimoy for being a genuine, real human being who talked to me not like a star to a fan, but as a fellow artist and equal.

Rest in peace, Mr. Nimoy. One of the kindest and most engaging people I’ve had the pleasure of knowing.

“Of my friend, I can only say this: of all the souls I have encountered in my travels, his was the most… human.” – Captain Kirk, Star Trek II: The Wrath of Khan

He had such a big impact on all of us, and he will be missed.