Comics Kingdom proudly introduces our loyal legion of Comics Royals to Will Roberts, this week’s guest blogger! Will Roberts is the host of “Will Roberts’ Weekly Telegram,” a syndicated humor radio show that is distributed to 39 stations in the United States and abroad. He is an internationally renowned performer and speaker known for his high-energy and insightful content spiked with humor. Will also does a daily humor cartoon called “Witt Of Will” that fans can enjoy on WillSays.com. 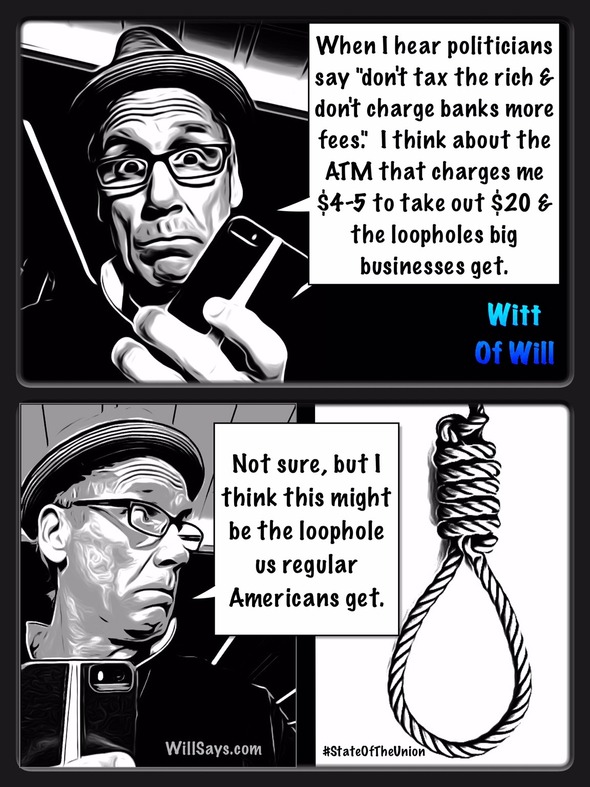 “Witt of Will” on WillSays.com

Will has interviewed more than a half dozen of our cartoonists on his radio program, so we thought it is only fair to introduce Will to our audience of loyal comics fans! We think readers are in for a royal treat this week because Will is not only very funny, but he is a big fan and supporter of our comics, plus he has a lot to say! So without further adieu …

Below is a personal essay that Will wrote to introduce himself to Comics Kingdom fans:

“When I was a kid I wasn’t much into history, unless I picked it up from watching TV. Most of what I learned then came from the Saturday morning cartoons and westerns. That didn’t work very well when it came to school, but it did make me a pretty funny young man, and reasonably good with a rope and six-shooter. (I’ll get to that later.)  In school, my teachers would ask me why I was always making noises and funny faces, and I told them I was just imitating my favorite cartoons. I remember one of my teachers saying that I would never amount to anything if I just kept staring at cartoons and westerns. I wish I had heeded that warning, but I didn’t.  As an adult, I’ve not changed much, except that I now get my cartoons from the newspapers.

Funny thing is, cartoons have a lot more to offer in regards to history and life lessons than most folks give them credit for. I watched “The Jetsons,” and I now see that technology all around us. Reading “Beetle Bailey” allowed me a peek into the military. And many of the cartoons, like “Dennis the Menace” and “The Family Circus,” addressed social issues, manners and politics of the day.  Plus, it’s hard to discount as a guy the important information I have taken away from … “Blondie.” Cartoons have always allowed us to laugh at ourselves and others without offending folks too much. And if a cartoonist put you in his cartoon, it was like a badge of honor. Of course, the honor part depended on what you did to deserve to be there in the first place.

As a political and social humorist myself, I have always said that cartoons are the “spoonful of sugar” that helps the daily news go down. And these days we need an awful lot more of this medicine called laughter to stomach some of the follies of Washington D.C. and the rest of the media circus.

Up until lately and the tragedy at Charlie Hebdo, cartoons have allowed folks to speak freely about the views of the people, politics and religion. Cartoons provide us with a way to touch a subject softly and see the humor in it without getting bent too far out of shape. Cartoons also bridge any and all generation gaps – it’s a simple fact that once you add humor or farce to anything, it changes a hard opinion into a “Ha ha, hmmm, I never thought about it that way” moment.  I’ve spent many years in the news business and equal time in the humor business, and I can tell you it is far better to begin your day with a cartoon than it is to watch the rape, pillage and plundering of Washington D.C. The way I look at it, politicians are in the business of making us cry with what’s happening in the world, and cartoons are in the business of making folks laugh at it.

Now this week I will be hanging out with you folks as a guest blogger here – an honor that I can tell you will be placed upon the mantel with the other achievements I have accomplished in my lifetime. Achievements like: working as a featured act with Cirque du Soleil in a show called “Viva Elvis,” guest writer for Robin Leach, Guinness Book of World Records for gun spinning, world-renowned trick roper, and syndicated radio and cartoon humorist. These achievements have allowed me to travel the world and speak to folks and have earned me the label of the modern-day Will Rogers.

But here’s the fun part of this week: Even though you have just read a lot about me in my blathering above, this week is not about me. See, a while back I created a segment on my weekly syndicated radio show called “Comics Kingdom.” In this segment, I bring on King Features cartoonists, folks like Hilary Price (“Rhymes with Orange”), David Reddick (“Intelligent Life”), and Rina Piccolo (“Tina’s Groove”), and they talk about their comics and whatever comes to mind or mouth. These audios and my comments will be featured on ComicKingdom.com. You will hear how these cartoonists started, came up with their ideas for the cartoons, how they relate to their own lives, and a whole lot more.

So cartoons may not have made me a Rhodes Scholar, or even the person you’d want on your team for trivia night. I can tell you, though, that I would rather show my kids a cartoon to explain the birds and bees than letting the mainstream media do the job.

Come back again tomorrow and all week to enjoy more of Will Roberts’ musings on comics and humor! Fans are in for a treat.