Our cartoonists always have interesting side projects in the works, and I’m very excited to tell you about an upcoming one from Bill Holbrook of On the Fastrack and Safe Havens.

Bill and his wife, Teri, have developed a new interactive novella that will be available soon on the iTunes store. It’s called Dethany in Virtu/Noir, and it stars Dethany Dendrobia, everyone’s favorite Corporate Goth Girl from On the Fastrack in a good, old-fashioned hard-boiled detective thriller that you get to help her solve.

Bill was kind enough to answer some questions about the project.

—Tell us what the app Dethany in Virtu/Noir is about!

The character of Dethany in “On the Fastrack” has proven to be wonderfully popular with readers as she imaginatively takes on various roles in cyberspace. She’s a self-described corporate Goth, and in the strip she occasionally becomes a 1940s gumshoe moving through a virtual realm. There she encounters spammers, trolls, identity thieves and other villains of online life. We’ve expanded this concept into what we’re calling an interactive novella—a light-hearted detective story with undertones of satiric commentary on modern technology. 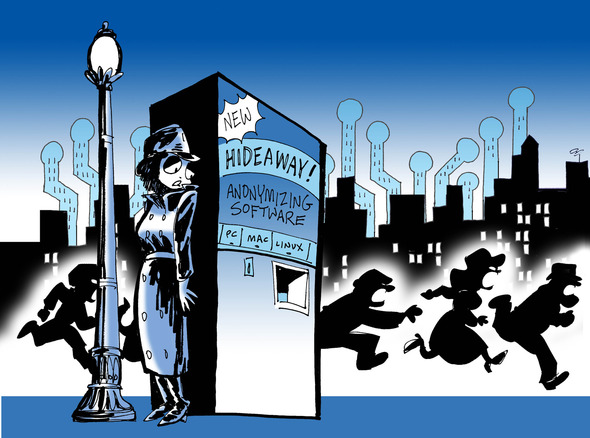 As with any film noir tale, an attractive member of the opposite gender presents our hero with a case.  Dethany is in her office when Clive B. Dashing, fearful that his identity has been stolen, visits her. What follows is murder, high-level corruption, rooftop chases, subterranean passageways, and software-dispensing vending machines.  It’s appropriate for middle school readers on up to adults.

?—What gave you the idea to build the interactive novella?

I’ve spent my career telling narratives through a series of pictures and words, and the tablet platform appeared to be the next popular delivery vehicle for content. By moving Dethany’s story to a tablet, all kinds of opportunities opened up for storytelling—a way to include sound, story branching, dual plotlines and reader interaction. So I created a partnership with my wife Teri Holbrook, who is a former mystery novelist, and John Lotshaw, creator of the webcomic “Accidental Centaurs” who has been investigating how to combine comics and mobile apps. Our goal was to see what kind of interactive story three individuals melding their talents could create. We felt that the emphasis on just three creators was important because it showed how the tablet platform could be an outlet for individual creativity. 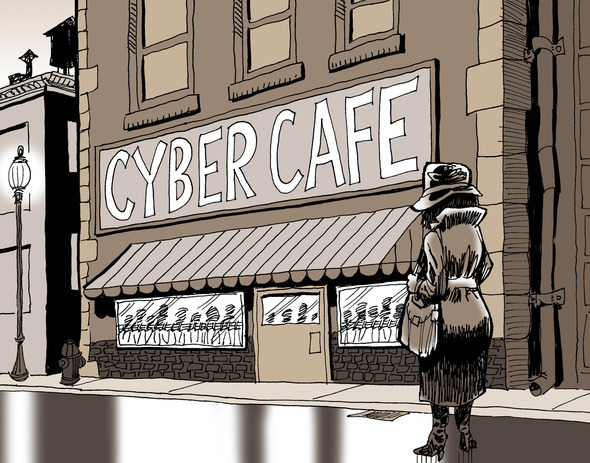 —How did creating an interactive novella like Dethany in Virtu/Noir relate to cartooning for you?

I see it as a next step in sequential art rather than animation, which is another art form entirely.  In our interactive novella, readers follow a series of images that build upon one another, telling a story with a beginning, middle and end. That may sound traditional, but the tablet platform, which gave us pixels and hyperlinks to work with, allowed us to present the story in a unique way. It provided me as a cartoonist new ways of thinking about my art form.

—What were some of those new ways?

For starters, it allowed me the chance to think about how adding sound, movement, and more words to my cartoon art made for a different form of storytelling. We wanted to do something new here, something that was not a graphic novel and not an animated comic strip. I’ve always seen myself as a storyteller who uses both images and words. With the tablet platform, we could expand both. So Dethany in Virtu/Noir does not look like a graphic novel–there are no word balloons–and it doesn’t look like a comic strip because it’s a longer, sustained story. Instead, the story is told equally in images and words. There are segments that are images only, segments that are words only, and segments that combine images and words. That’s why we call it a novella—it truly is one. 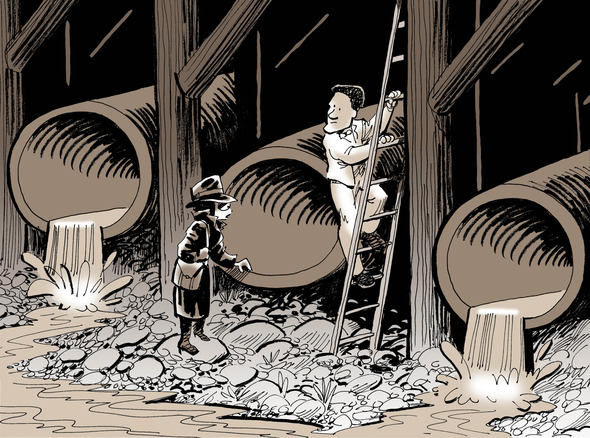 Another way that the tablet platform allows me to think about cartooning is the use of hyperlinks. Through story branching, I can provide readers with multiple pathways through the story. In Dethany in Virtu/Noir, some segments are linear, but then readers come upon decision points where they have to decide the direction the story will take. We were also able to create dual plotlines. Once readers are introduced to the basic “case” that Clive B. Dashing presents Dethany, they can choose which story to follow–one that is a classic noir crime-solving fiction and one that features more heroic physical action. The two plotlines involve the same characters but have completely different endings. I’ve always tried to place myself at the forefront of cartooning developments, which is why, twenty years ago, I created “Kevin & Kell” as one of the first webcomics. Now with the tablet as a content platform, I see new possibilities and am excited to see what I as a cartoonist can do.

?—Talk a little bit about the process of building the interactive novella.

?In the fall of 2012 Teri and I began spending our Sunday evenings hammering out two plots with branching options. She’s a college professor and I do three comic strips, so Sunday evenings were our time to think freely about this project. By early spring of 2013 I was able to construct a flow chart that we could follow, and Teri began writing the text.  I started the artwork in April and began sending finished segments to John.  He built it, combining the text and images and adding sound, parallax scrolling and interactivity using the Corona SDK development system to create the iOS app. It sounds cut and dried, but it wasn’t at all. There were starts, restarts, revisions, missteps. We all knew going into it that we were going to be learning something new. Creating an interactive story that uses sound, images, words, and movement is a different creative process than creating either a daily strip or a print novel. The creative process continued up to mid-2014, after which remained myriad details such as purchasing music rights, sound editing, proofreading, etc.  It’s been a long journey, but worth it. ?

—Is there anything you learned from creating the interactive novella that you’d like to share with us? ?

This has been an exciting project. I’ve had to stretch my creative muscles in ways I’ve never done before. It has also made “Fastrack” a richer strip as Dethany has become a fuller character moving through a universe with deeper shadings. I’m excited for the future of the strip!

I will also say that for me, it takes a team. I’m used to working at my drawing table, alone with my pen and ink and the characters in my head. Creating an interactive digital story meant finding the right people to work in images, words, sounds, and movement. And I think we were the right team for detective Dethany…partners in crime! 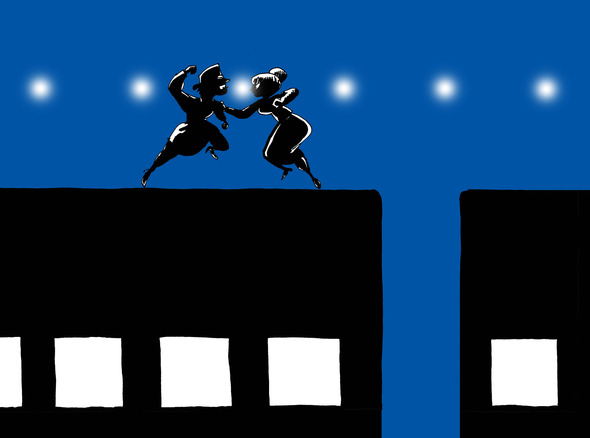 Dethany in Virtu/Noir will be available soon from The iTunes Store. Readers can access the introduction up to the first decision point for free. To move beyond that to the two storylines is $2.99. Bill and Teri humbly estimate that it provides about two hours of humor and high-tech sleuthing enjoyment! We will let you know as soon as it becomes available!