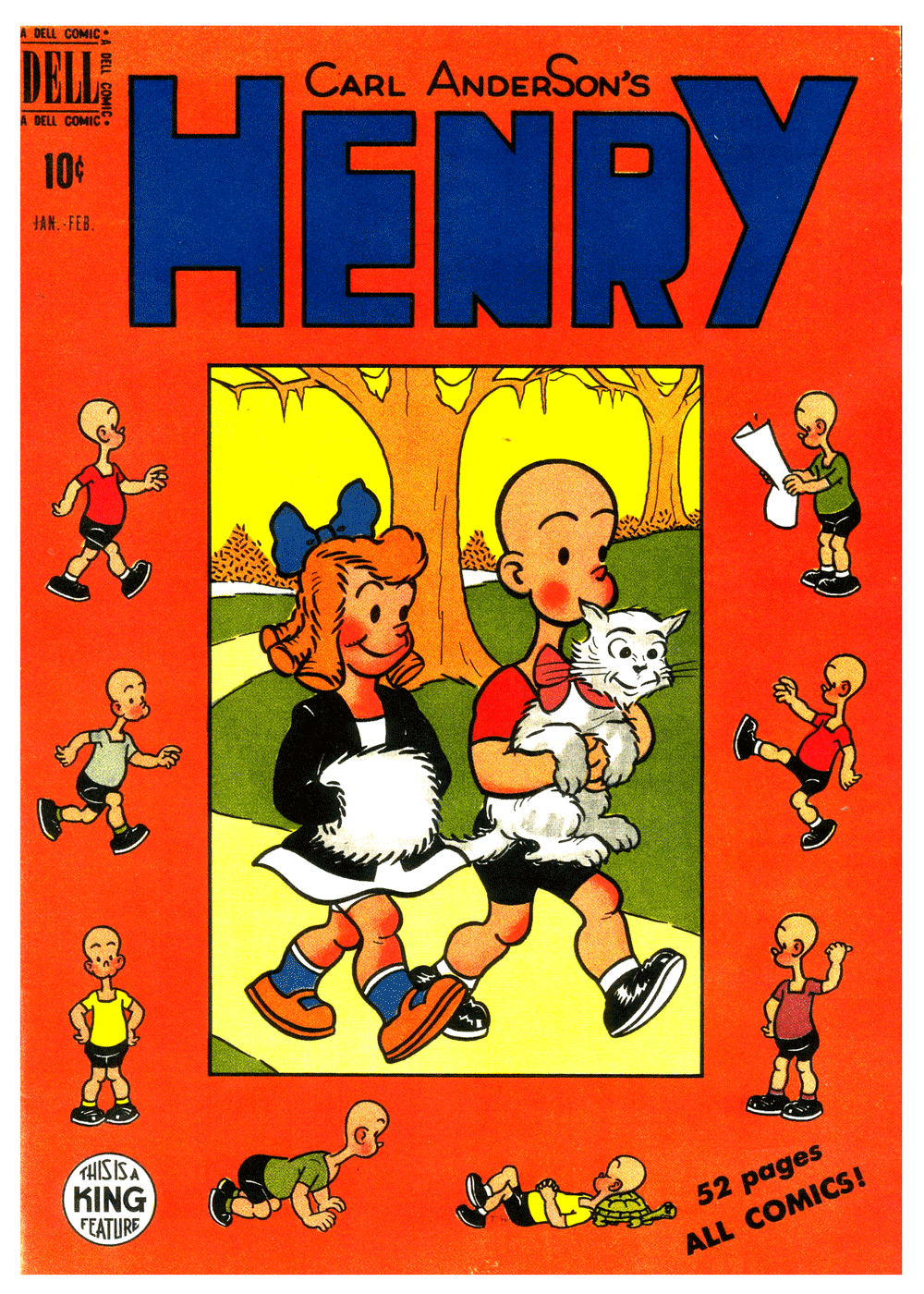 The year is swiftly ebbing away, but before it does I don’t want to forget another 80th anniversary.

Earlier in 2014, we looked at the other stars of the Class of 1934, including “Flash Gordon,” “Mandrake the Magician” and “Secret Agent X-9.” Today, we’ll look at Carl Anderson’s “Henry,” which originally ran in The Saturday Evening Post starting in 1932, but it became a King Features’ strip starting 80 years ago yesterday.

Henry was a strange looking kid. He had no hair, no mouth and no expressions. His humor is pantomime. He never speaks, but the rest of the people in his world do. The gags are not always crystal clear, and Anderson, though a weathered veteran of comics production, going back to the very beginning 30+ years previous, was never above an illogically strained, contrived gag if he could get it on paper.

Anderson died in 1948, though his assistants had been doing “Henry” for years at that time. Many of you older kiddies will remember the long series of “Henry” comic books, which started in 1949 drawn by John Liney. He found that the only way to make it work for comics stories was to finally give Henry a voice, though it didn’t change the strip, leaving a “strip” Henry and a “book” Henry. Call it a Henry Schism.

Here’s a few “Henry” items that I present to celebrate this anniversary. 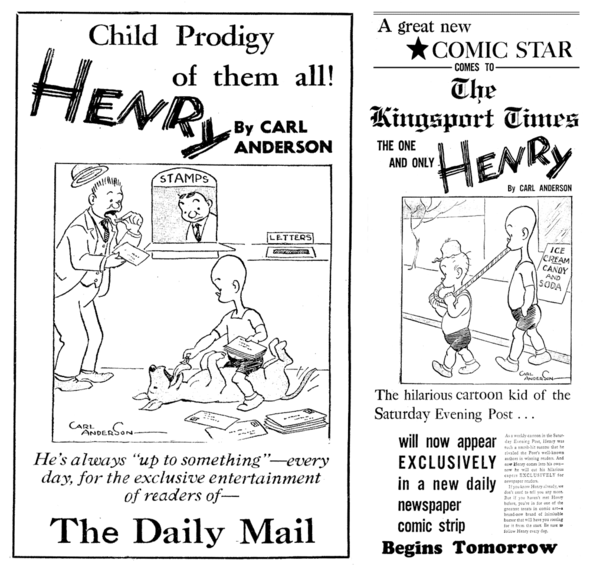 ORIGINAL 1934 PROMOTIONS FOR HENRY SHOWING HIM IN THE THEN FAMILIAR ONE PANEL GAG FORMAT FROM THE SATURDAY EVENING POST. 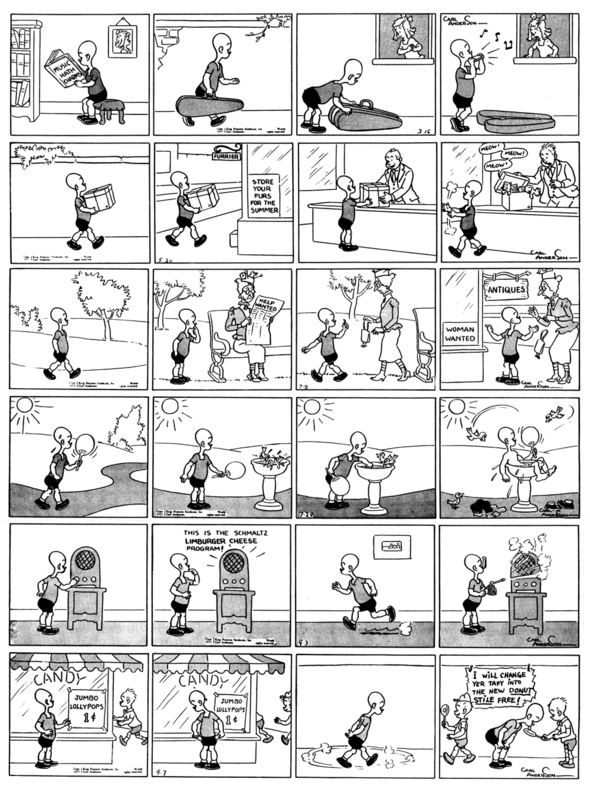 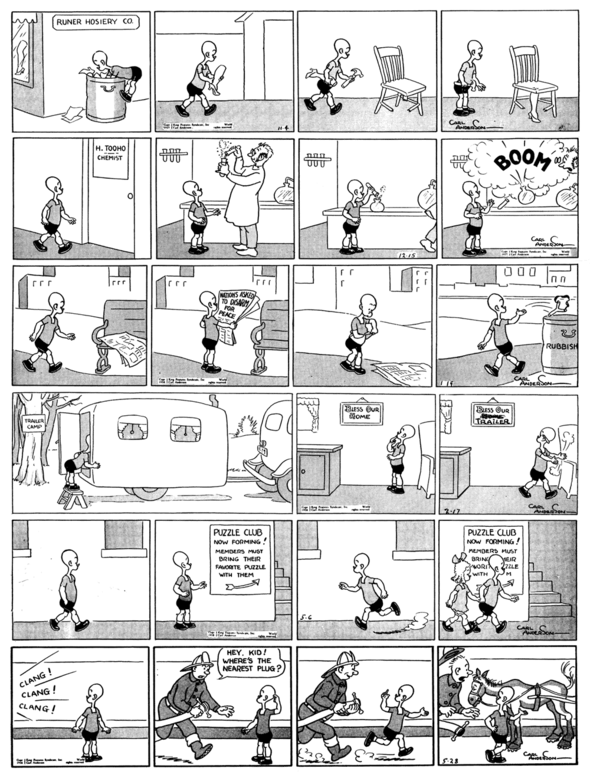 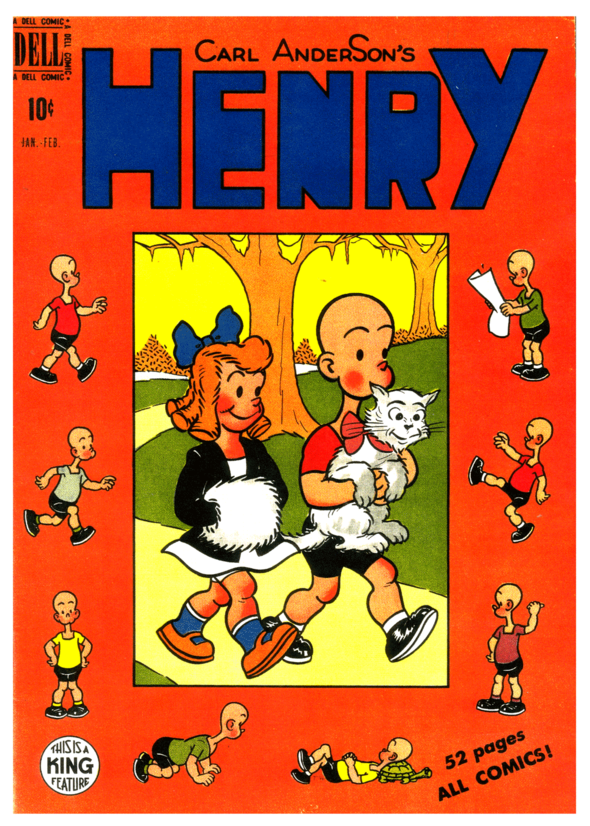 COVER AND TWO PAGES FROM MARCH OF COMICS  JUNE 1952 SHOWING SOME OF A TALKITIVE HENRY’S HOME LIFE. 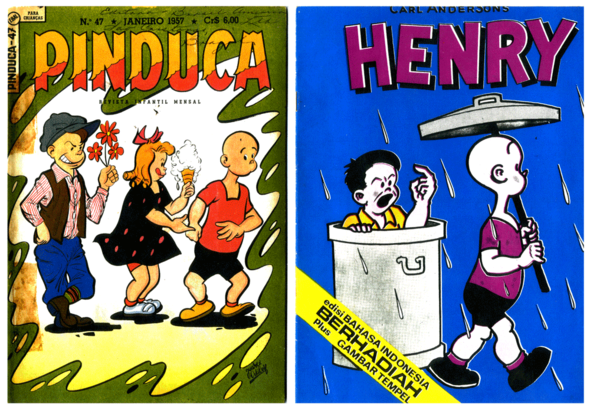 “Versus” had a demented part to it: a man crushed by a colossal foot, like an ant on a sidewalk. But, other than that, Arthur has a very ordinary bunch of daily miseries to confront in his wife and family who only figuratively “squoosh” him. Sherman the giant may break his body, but Evelyn will break his soul. Some kind of philosophical point is being made by Jack Wohl, but it’s not a hopeful one. It’s about being trapped. This might have made a great script for an “Outer Limits” episode.

At least, it was an unusual.