Ask the Archivist: Get Squooshed 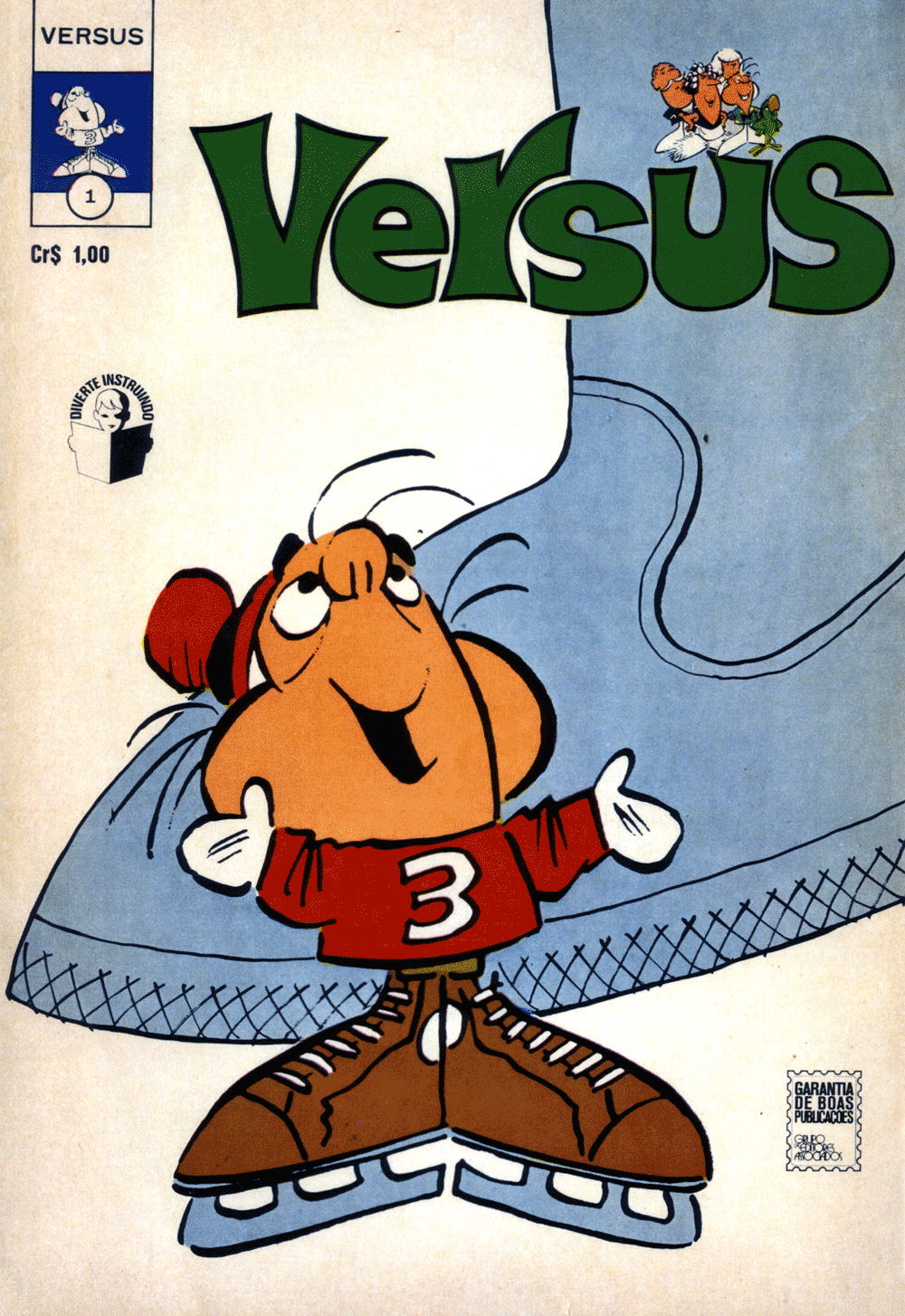 The Archivist today looks at the series VERSUS by Jack Wohl.

Wohl was and is a very creative guy: writing, drawing and participating in many TV productions as well as cartooning.

Though he’s probably best known for PIXIES, the United Features’ series about letters, words and numbers that talk to each other, he did several other strips that are less memorable, including VERSUS.

The series is more or less about a standard poor little guy who is pushed around by life, by a nagging wife, freeloading relatives and even a pet bird that takes advantage of him. The little guy is one Arthur Freem, and the “versus” part could read “life.” The strangest part of this scenario is that Arthur doesn’t work at a job, he instead goes out every day and gets chased and stomped flat by a hundred-foot-tall giant named Sherman, nine-to-five.  Does that sound like it makes any sense? 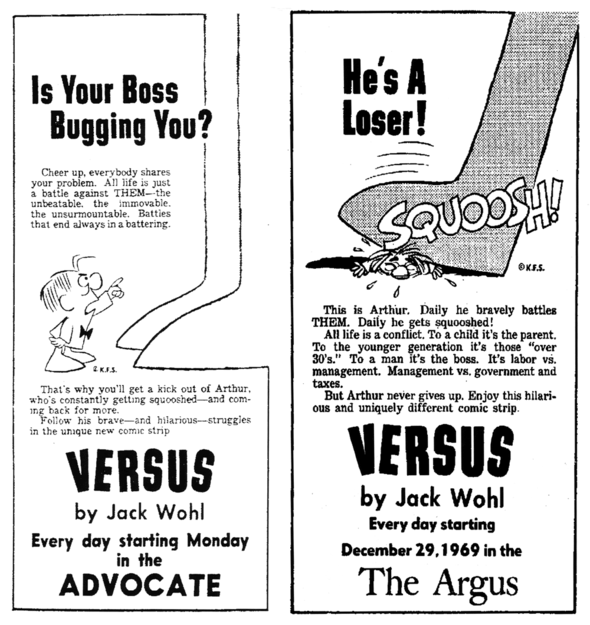 It does if you look at Sherman as being an allegory for a world we can’t control, and overwhelms all of us who spend our blood, sweat, and years toiling for ungrateful dependents. Or maybe that’s a lot of hooey and the strip is just reminding us about how dangerous giants can be.

Evelyn is his frowzy, henpecking wife who never changes out of a her curlers and fuzzy slippers.

Burt is his good-for-nothing brother-in-law who does no work, and has cheap money- making schemes that usually mean Arthur pays him all the cash that said scheme ever will make.

Leach is a panhandler who can always offer Arthur the benefit of his experiences as a failure.

Howard is an old friend of Arthur’s, who is apparently an older version of himself, also a perpetual loser, a constantly bruised and bandaged veteran of whatever Sherman is in his life.

“Mr. Henry Pointdexter” is their pet parrot, who is always there with an unsympathetic ear, and demands to make his own life easier.

Bernie is perhaps the most sympathetic character. He is Evelyn’s young nephew who comes to live with the unhappy Freems. He’s the only one that doesn’t hold Arthur in contempt or bleed him. 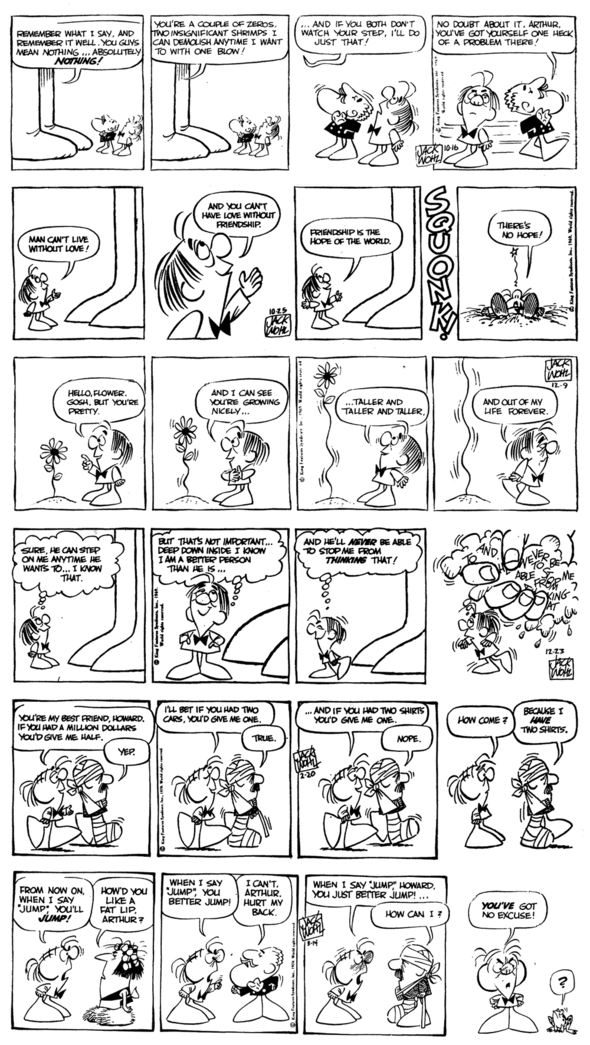 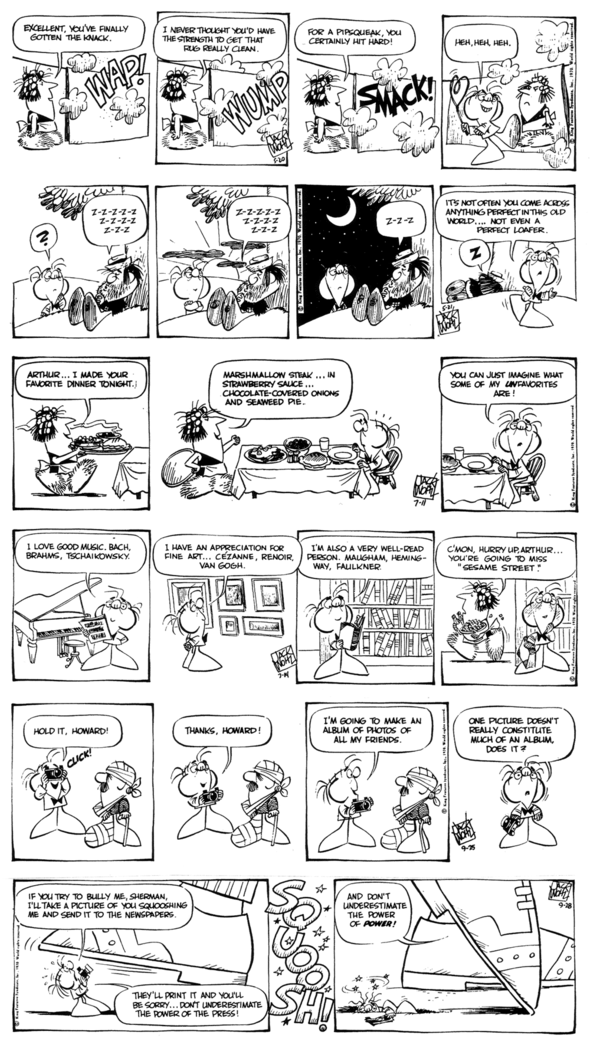 The strip did not last long, though it was a daily and Sunday from 13 October 1969 to 8 April 1973.  Perhaps Arthur’s unrelenting unhappiness had something to do with it; his “loser” philosophy may have been too much of a downer for Features Editors, who are expected to populate the comics page with bright nuggets of cheer. Of course, PEANUTS was always about frustration and angst, but Arthur and his doings were more sharp-focused and adult. 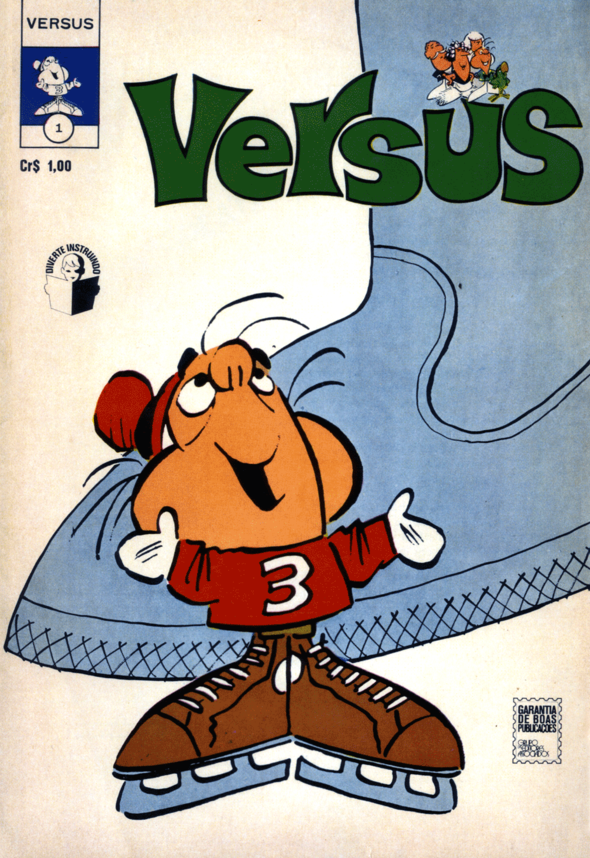 Wohl was doing two other series at the same time, the aforementioned PIXIES and a UFS panel called VIPEEWEES.  Of the three, only PIXIES was a hit, running from 1966 to 1987. He had another UFS series entitled PS that ran from 1976-77.

To MR. WHOOPEE:
Glad to be of an educational value to those who would care to get to know the less well- known history of comics.  I just hope you don’t take away an idea that there was a lot that should stay unknown.
To Mike Smith:
A lot of early strips milked one gag or variants of it for as long as the cartoonist thought he could use it. The gag in LITTLE WILLIE GETTIT was that Willie, totally innocent, by chance comes in on a compromising scene. The ones in that scene don’t see that Willie has nothing more nefarious on his mind than ice cream. However, guilty people assume the lad is there to blackmail them. Every episode could have been resolved differently if they just said, “Run along, Willie. Go play.”
It’s also McManus’ last strip of no consequence. Willie came and went without notice, and he was never revived like other titles, so in a way, Willie has at least that much historical significance.