Ahh, comics: our favorite combination of words and pictures! (Or mine, at least!)

Some of the funniest and most meaningful cartoons, though, are ones that tell a story with no dialogue at all– whether they contain no words, or only a caption or words used a a visual gag, “silent” comics can be some of the most interesting ones.  This week, our cartoonists shared some of their favorites.

One of the few completely wordless cartoons I can every remember drawing was this obituary cartoon I did last year for Nelson Mandela. Just by coincidence it is close to a year to the day since he passed away ( the cartoon is dated 12/8/13 and ran probably a day or two after he died) 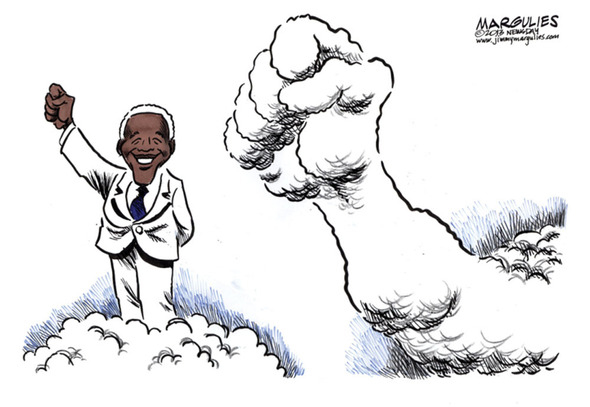 Zippy & Griffy go to the movies, but Zippy is more entertained by the hand dryer in the Men’s room than the film on the screen.
I only wish I had the guts to do this the last time I suffered through a “Night at the Museum” sequel.

This silent saga was entitled ‘B’ Prepared. 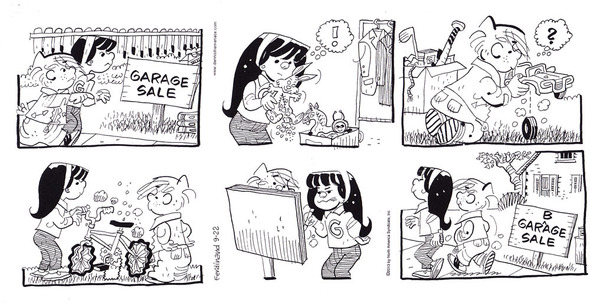 For those who are still raking leaves…as we are in Georgia. 🙂

Here’s a favorite silent Barney Google and Snuffy Smith cartoon of mine from years past. Even though it is “silent,” it’s about making a lot of noise!

I do a ton of these. Often, the “speaking” is strictly narrative. Sometimes I do labeling. Very occasionally, it’s just a visual gag. This Sunday strip is my take on the classic children’s book, “If You Give a Mouse a Cookie.” The text is kept to the narrative boxes. Except for one “gasp.”

The ones with no words are the hardest to write.