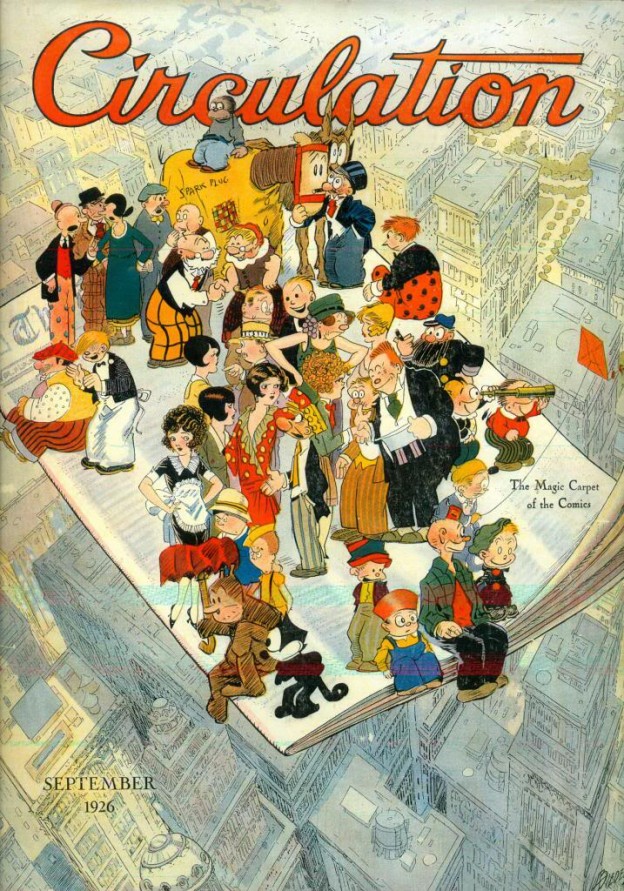 The Billy Ireland Cartoon Library & Museum will celebrate the centennial of King Features Syndicate with King of the Comics: William Randolph Hearst and 100 Years of King Features. This exhibit examines the role William Randolph Hearst played in the birth of newspaper comics and traces the 100-year history of King Features, the company he founded to develop and distribute comics, columns, editorial cartoons, puzzles, and games around the world. Brian Walker, author of The Comics: The Complete Collection and co-curator of the exhibit Masters of American Comics, is serving as guest curator for this historic exhibition.

Among the many King creations included in this exhibition will be:  The Katzenjammer Kids, Happy Hooligan,Little Jimmy, Bringing Up Father, Krazy Kat, Polly and Her Pals, Tillie the Toiler, Popeye, Blondie, Barney Google and Snuffy Smith, Flash Gordon, Mandrake the Magician, The Little King, Henry, Prince Valiant, Buz Sawyer, Rip Kirby, Beetle Bailey, Dennis the Menace, Juliet Jones, Hi and Lois, Family Circus, The Lockhorns, Hägar the Horrible, Zippy, Marvin, Curtis, Bizarro, Baby Blues, Mutts, Rhymes with Orange, Zits,Tina’s Groove, and Dustin. In addition to original drawings by the artists, related materials such as printed newspaper pages, photographs, correspondence, sales brochures, advertisements, and merchandise will dramatically demonstrate the impact that King Features has had on the evolution and success of newspaper comics.

SATURDAY, DECEMBER 13
FREE and OPEN TO THE PUBLIC
1-7pm (schedule below)

On Saturday, December 13th the public is invited to celebrate the opening of King of the Comics: William Randolph Hearst and 100 Years of King Features at the Billy Ireland Cartoon Library & Museum. Events are free.

2:30 pm – Behind the Scenes with King Features’ Mutts and Rhymes with Orange, featuring Patrick McDonnell, Hilary Price and Brendan Burford

Special thanks to King Features Syndicate for their sponsorship of the exhibit and events.

In conjunction with the opening celebration, The Wexner Center for the Arts will show two films adapted from iconic King Features characters. Both will be screened in 35mm in the center’s Film/Video Theater. Visit wexarts.org for tickets and information.