Happy Thanksgiving to those readers in the United States who celebrate this traditional holiday! My way of offering Thanksgiving greetings is to pull out of the files some gags from the past. 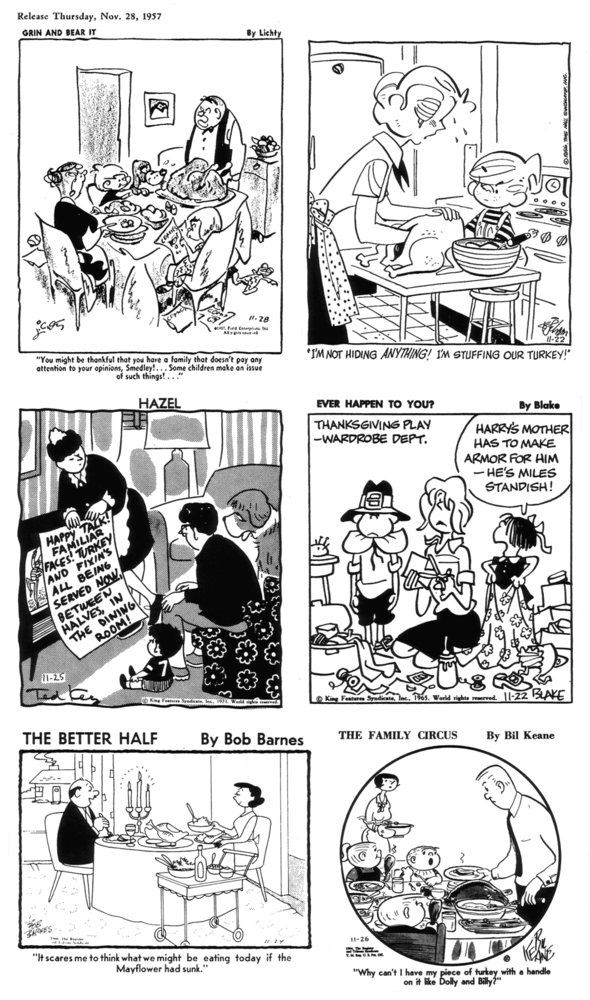 Below are my responses to last week’s comments:

Thanks for noticing my THE BETTER HALF entry here on the 20th. It was one of the last of the remaining strips that started with the old Register & Tribune syndicate. I read the adventures of the Parkers all my life, and as you saw in last week’s post, many of us will miss it.

I don’t know if Mr. Glasbergen’s style would be quite simpatico with what we would use in APT 3-G. I was thinking maybe PRINCE VALIANT instead.

To Robin Gray Ballard, Timothy Fisher:
We may eventually add vintage BETTER HALF files to the site, but I wouldn’t think anytime before next year sometime.

To Lud:
Many people say they didn’t care for the drastic change in Stanley & Harriet’s appearance from Bob Barnes’ era to the Glasbergen version, but the change was actually a gradual one.

When Barnes died, his wife Ruth, whom he had been using as a ghost and clean-up gal for some time, took it over. She obviously had the hand of someone taught how to draw, as opposed to a natural talent like Barnes had been, but she nursed along a batch of unpublished gags from her husband and spread them amongst her efforts for a year after his death. She handled it for several years as the characters slowly slipped into her style completely. She liked a much thinner pen than Bob, and Harriet & Stanley got thinner too. When she stopped in the 70’s, another artist, “Vinson” tried doing them in that style, but he changed them again to the angular version that Glasbergen (as “Harris”) tried emulating in his earliest days on the series, as we documented last week. Eventually the style developed into the now recognizable and unique Glasbergen look.

Ignore the calories and enjoy the feast! Happy Thanksgiving to everyone.