Exciting news! Our very own Vice President of Creative Services, Frank Caruso, illustrated a book written by the one and only Bruce Springsteen.

“Outlaw Pete” is a picture book that was inspired, word-for-word, from a ballad of the same name on Springsteen’s 2009 album, “Working on a Dream.” It’s now available from Simon & Schuster.

“Outlaw Pete” is a modern legend of a career criminal who begins his life of crime by robbing a bank in his diapers. From then on, his sins only multiply and he becomes an outlaw, killer and a thief … one who “only slows down to sow his grief.” When he has a vision of his own death, he gets married to a Navajo woman, settles down on the reservation and has a child. But, his past eventually catches up with him and not everyone is content to let Pete get away with his past transgressions. Facing his own reckoning, Outlaw Pete learns that “We cannot undo these things we’ve done.”

To celebrate, Frank sat down and answered a few questions for us!

How did this project with Bruce Springsteen come about?
I was working on a graphic novel (Heart Transplant with Andrew Vachss) and was listening to Bruce’s album Working on a Dream. When OUTLAW PETE came on, I literally stopped what I was doing and listened to the story. Over and over again. And the book just played out in my head. I thought not only did Bruce write a great song, but he also created a great character. I did some sketches and roughed out the pages and showed them to my friend Dave Marsh over lunch. Dave got it from sketch one and eventually sent it to Bruce. Bruce dug it, we connected and it went from there….

What do Outlaw Pete and Popeye have in common?
I mentioned Popeye in an early quote because I feel the character Bruce created cuts deep into the folklore of our country, represents a mythical realness and tells a story that great characters such as Popeye, Huck Finn, Tom Sawyer and Dorothy Gale do. They each represent different regions, different backgrounds, different morals and experiences that generations of readers have related to. 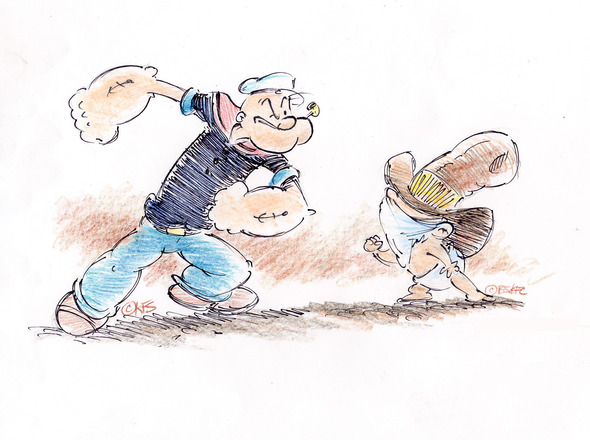 Frank drew us a sketch of Popeye and Outlaw Pete facing off!

Both Popeye (“I y’am what I y’am”) and Outlaw Pete (“I’m Outlaw Pete. Can you hear me?”) are brash and unapologetic about their rough-around-the-edges dispositions. What is it about them (and these types of characters) that creatively inspires you?
If THEY know who they are, then WE know who they are. There’s a strength in both characters which makes them larger than life and allows us to feel who they are. And in one way or another, relate to them.

Who would win in a fight Popeye or Outlaw Pete?
OK, that’s crazy. First of all, Popeye never likes to fight unless his back is up against the wall. And being he’s a sailor and primarily based at sea…and Pete is riding around out West in land locked states, I doubt their paths would ever cross. I don’t know…we’ve seen what happens when Pete pulls a knife from his boot, but we’ve also seen what happens when Popeye pulls a can of spinach from his shirt…(look out!)….

What do you hope readers take away from the book?

I would like to see people read deep into the story and relate Pete’s personal journey to their own journey in life. There’s always a deeper message…Dr. Seuss wrote on different levels and Outlaw Pete is multilayered as well. Personal interpretation is the mark of a great story, and Bruce is a great story teller.

You can also watch this great video of Frank and Bruce hanging out on “The Daily Show:”

As an extra treat, here’s a Zits comic from a few weeks back where all of Walt’s tee shirts referenced the early years of Bruce’s music career: