Ask A Cartoonist: Thanks to our Veterans! 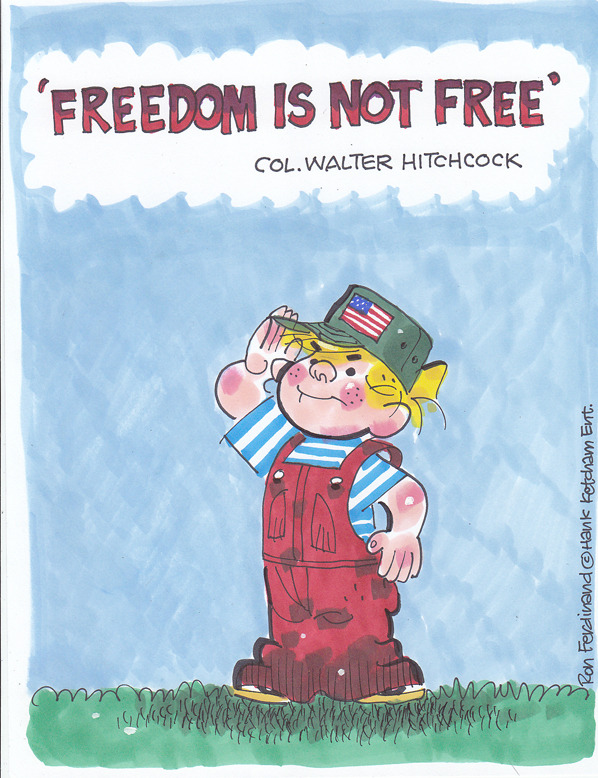 Yesterday, as you know, was Veterans Day in the US, and Remembrance Day or Armistice Day in many other countries.

I have many friends and family members who serve or have served in the military, and I am so grateful to them every day for their generosity in giving of their time and talents, and risking their lives to improve the lives of other people.

In honor of our veterans, today, I asked our cartoonists to share their thoughts about Veterans Day.

As I remember Veterans Day, I am proud to have served 4 years in the United States Navy (stationed in Okinawa, Japan) and I found this, a rare glimpse of my boot camp picture from some years back… These holidays seem to be more about a day off of work and burned meat on grills these days, but there were, and continue to be, young men and women you’d never have thought of, that did not only sign up and serve something bigger than themselves, but who died in that service here and abroad, so you and I can have the freedom to make our own choices and decide our own fates. Just take a second, perhaps longer, and remember them. 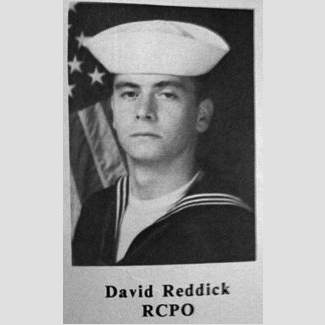 Last year, I did a Veteran’s Day Sunday with the quote “FREEDOM IS NOT FREE” in it. It was from a speech made by Lt. Walter Hitchcock to military school graduates. A few weeks later, I received a letter and a call from Col. Hitchcock thanking me. I later sent him this cartoon. 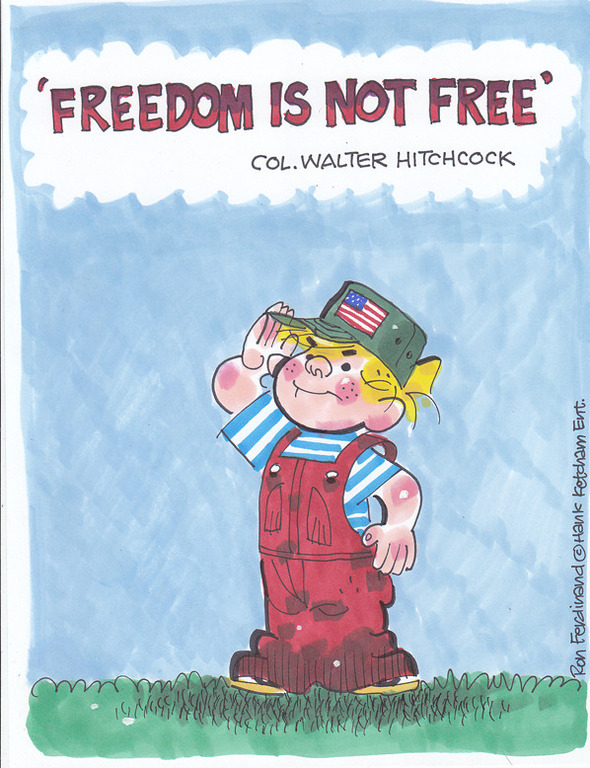 My father, James L. Griffith, served in the US Army from just after Pearl Harbor Day in 1941 to 1967, retiring as a Captain. We didn’t always agree on politics, but I’ve come to respect his devotion to his country–in war and in peace. This is an excerpt from my graphic memoir about my parents, to be published by Fantagraphics Books next September. 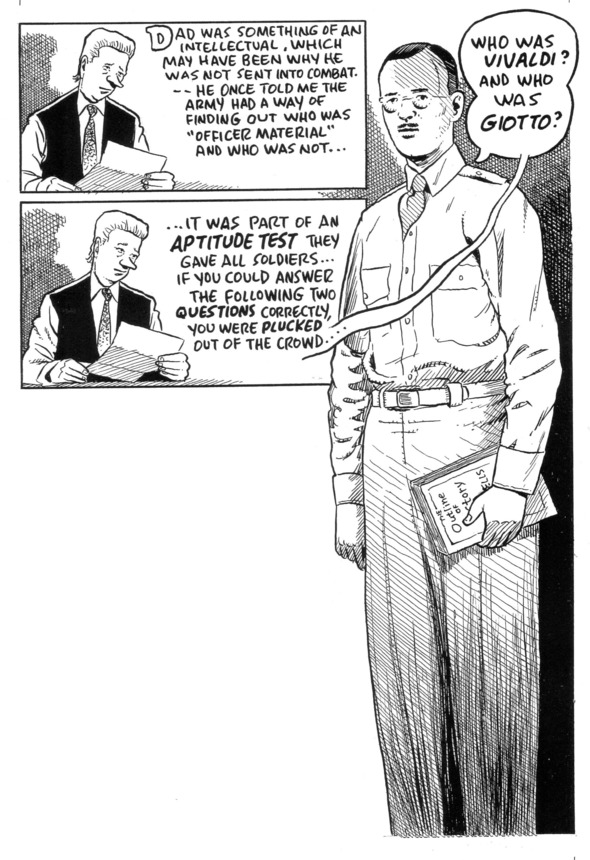 Bodacious thanks to all the Veterans for their service!

My grandfather was a British army surgeon in WWI and was gassed, but survived. My father was in the home guard in Britain in World War 2, and one day they caught a German parachuter.

The message below is from my husband , Jim Nolan.

I’d like to recognize Lt. John V. Curry, my great uncle who fought and died in the Battle of Cantigny in World War I. First Army, 28th Infantry. I’d also like to recognize my great uncle Robert Koenig, who fought and died in World War I for the German Navy. John, your nephew, and Robert, your niece married each other and raised a happy family, who remember you both with great respect.

Here’s a special piece of art I did for our USO trips to Southwest Asia. 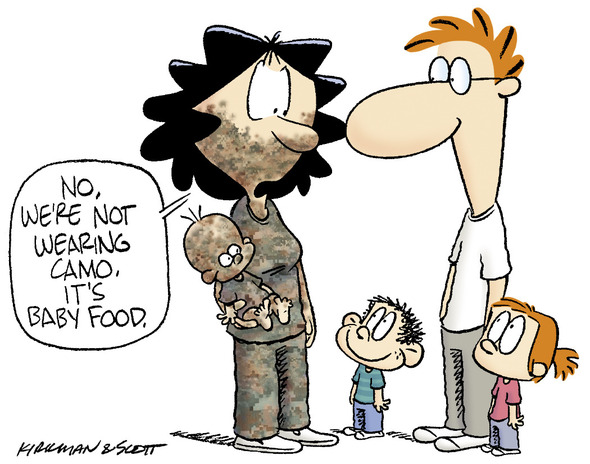 Dethany grew up in a military family as her mother, Ann Dendrobia, rose through the ranks of the Air Force. Even now, this comes through as seen in this strip from this past May.

My father served in World War I on the USS Arkansas. He was 16 when he lied about his age to get into the Navy. My Great Grandfather served under Stonewall Jackson and then Robert E. Lee in the Civil War. He fought in 13 major battles. And my ancestor John Grace served directly under George Washington and was a minor hero of the Revolution. I am very proud of all three for their service, just as I am proud of all the brave men and women who have fought for our country.

Many of us forget how and why we fight for freedom in this country. For others, forgetting isn’t an option.

For Veteran’s Day I’m sharing the following picture. It’s a pic taken of my Dad (age 19) during World War II, with a corresponding picture to to the right of his grandson Dave (age 26) – as fate would have it striking the same pose some 60 years later. Another coincidence is, before going overseas, they both trained at Camp McCoy in Wisconsin. In 2010, my nephew Dave travelled to Schmölln, Germany (where the picture of my Dad was taken) and took some pictures to compare them with pics my Dad had. You can see the “Then and Now” pics at the following URL: http://www.jimkeefe.com/archives/5990 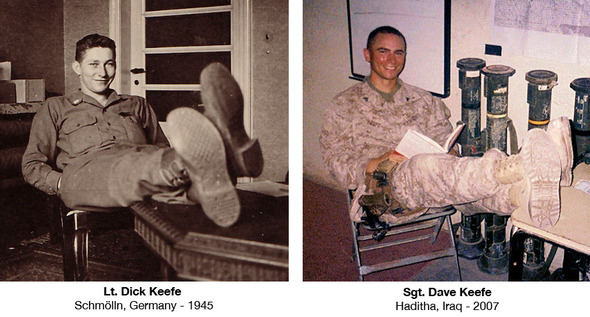 Here’s to all the Veterans – Thank you for your service.

I was drafted when I was in my teens and I feel I was a lot like Beetle. I made a lot of my own decisions liked applying for engineering training and ended up in Washington University getting a degree in Architecture. How’s that for Army service? Then I was sent to an Ordnance depot in Naples, Italy. They made me their Intelligence and Investigating Officer. I had a squad if soldiers guarding the depot with a company of Italian soldiers and a camp of a thousand German prisoners of war. I investigated thefts, escapes, rapes and murders and was always testifying in court. All this was without training. I was sort of on my own with my own jeep and interpretor. So I took advantage of my office and toured Italy taming photos of all the great buildings and making hundreds of drawings of street scenes. Then one day I heard on the radio, “The War is over.” I dropped what I was doing, herded the prisoners onto freight cars and rode with them to Switzerland and turned them over to the Red Cross. On the way back to Naples I stopped by the shipping point of Leghorn and asked if there were any boats going back to America. There was one just leaving. Without any permission I jumped on, got home where I kept making my own decisions.

Mort Walker was also kind enough to share some pages from his war sketchbooks with us: 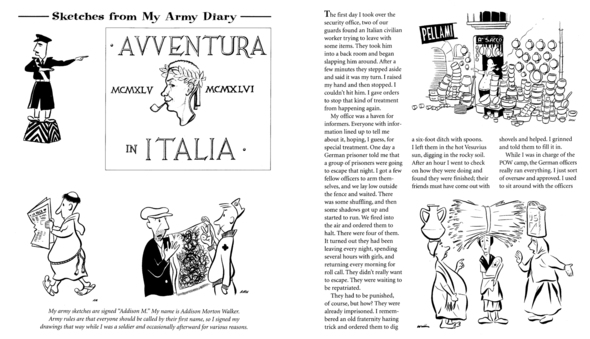 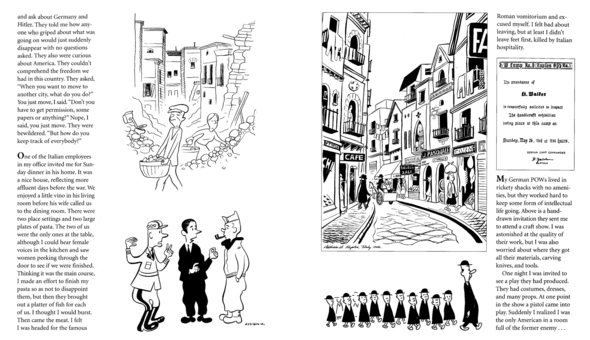 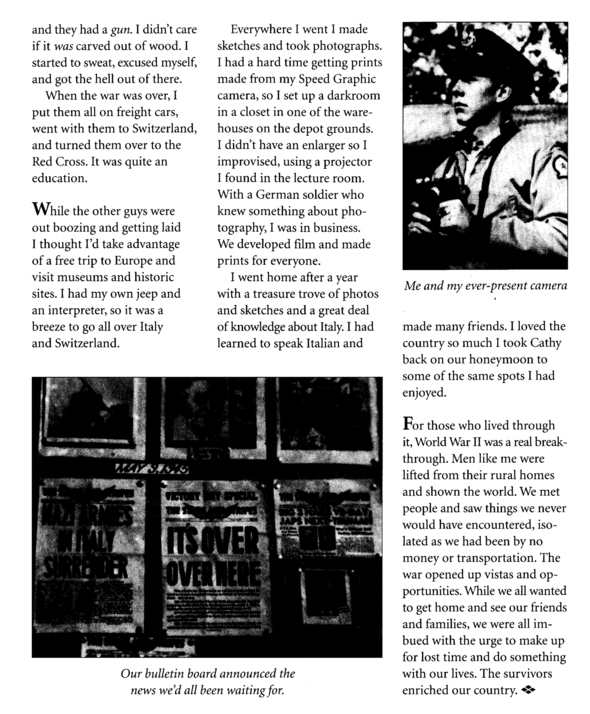 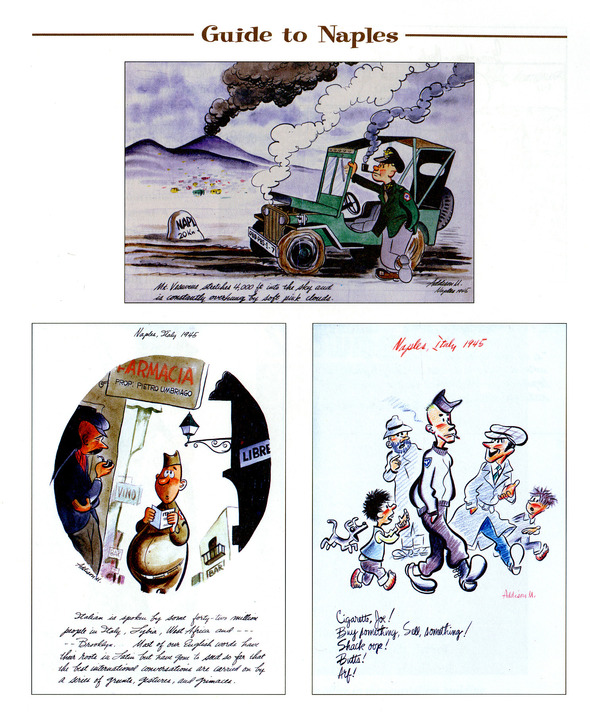