Ask the Archivist: Colonel Potterby and The Duchess

Today’s blog is about a surreal series from “Blondie” Sunday featuring the Bumsteads’ companions for thirty three years.

The great Chic Young at his home studio the year he created Colonel Potterby and the Duchess.
(The BLONDIE daily original of 26 November 1935 is on the drawing board.)

When “Blondie” began, it was a daily and Sunday. King Features’ comics always offered a smaller strip atop the main features for the weekly page. The smaller strip atop of “Blondie” was the golf-obsessed “Family Foursome,” which lasted four and a half years. In the closing weeks of that feature, an extra space appeared on the right side of the Hearst Sunday comics, often filled with a puzzle or paper doll cut-outs … which even extended to “Flash Gordon!” I’m sure all little girls wanted to dress up Ming in the latest space duds.

In early 1935, Young filled that space with some one-shot gags under the title “Side Show,” but quickly changed to a miniature strip series, “Colonel Potterby and the Duchess.” The “Family Foursome” departed in April and the Colonel took over the top of the page.

The stars of the piece were Colonel Potterby, a short, bald old fellow in a morning coat and top hat, and The Duchess, a middle-aged lady in an old fashioned, leg-o-mutton sleeved dress and man’s fedora. The hat was a common affectation of landed-gentry types then. Still might be. They’re  1930’s screwball comedy, James Thurber-style whimsy. Characters you might meet in a New Yorker cartoon.

That both have titles implies they are supposed to be pompous and perhaps undeserving of sympathy from us further down in the class hierarchy. But instead of behaving like stodgy British aristocrats, they run around like school kids whose hormones have just kicked in, dealing with it in immature and irrational ways.

He’s smitten with her so much that he’ll let her walk all over him. In fact, he’s often seen begging on one knee to have her marry him, but she never would say yes. She much preferred his courting to ever settling down. Whenever the Colonel gets interested in another girl, she’ll put an end to it, usually with a violent outburst. She seems pretty heartless to him most of the time, but he takes his lumps and keeps returning for more. Ah, we men can be such fools. The merry pair outlived all the other top strips, coming to an end in 1963. 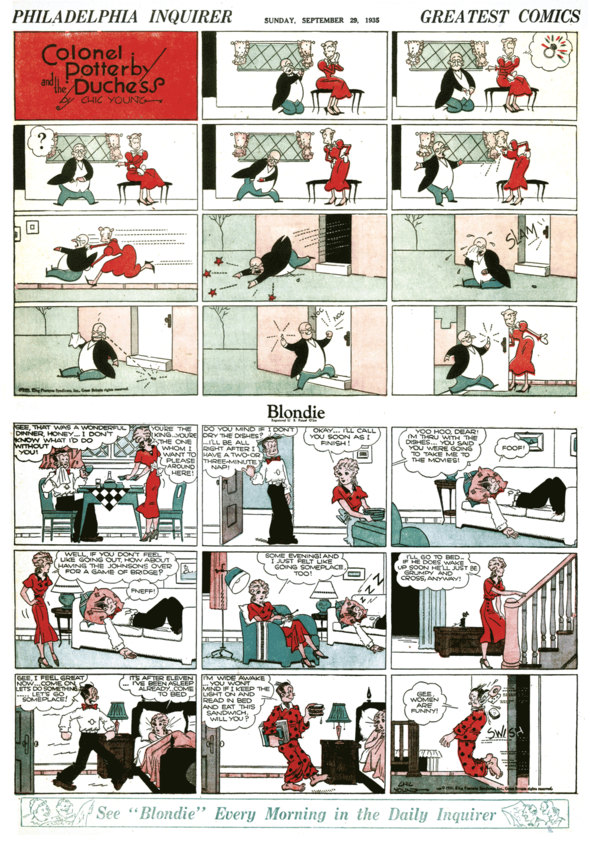 THE USUAL CONFIGURATION FOR CHIC YOUNG’S SUNDAY PAGE IN 1935.
“COLONEL POTTERBY & THE DUCHESS” WERE LARGER THAN SOME OTHER “TOP” STRIPS,
SO IT COULD BE SOLD AS A STRIP BY ITSELF. 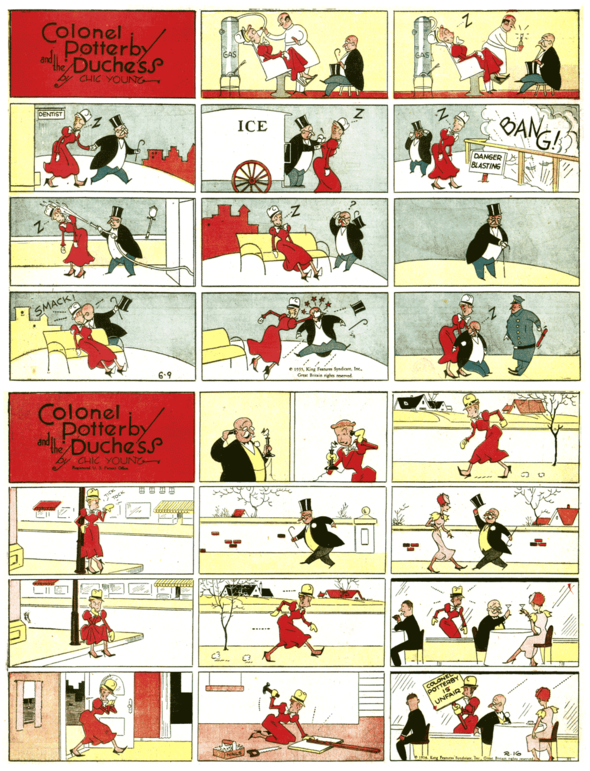 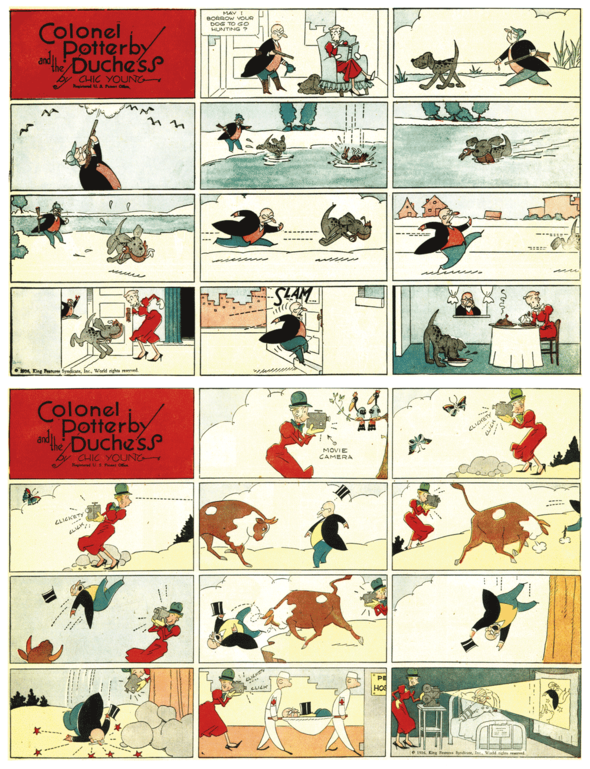 Thanks for all your comments on last week’s post. Here are my replies to questions answered.

I hope the film about current comics stars comes out soon. Some kind of collection of Brickman’s strips should be done, but as a humorous history book, maybe with lots of annotations because the gags were topical. Looking at the “Small Society” panels I used last week,  it’s pretty sure readers under forty have no idea who Everett Dirksen, Charles DeGaulle, or Huntley and Brinkley were, or What a punch card or a cigarette commercial was. It makes one feel pretty obsolete to reflect on how what was in the everyday firmament of life is now the dust of the past. Hoo Boy!

My thoughts on Brickman are similar to yours. In his day, it was still desirable to present a gentle,  evenhanded point of view for a nationally syndicated cartoon, and in that vein, he tried to come up with a solid point to the gag.  As I related in the blog last week, his forte was ironic resignation. A modern approach would be a lot more aggressive and partisan. The Gun gag you cited would probably feature horns on the dealer’s head.