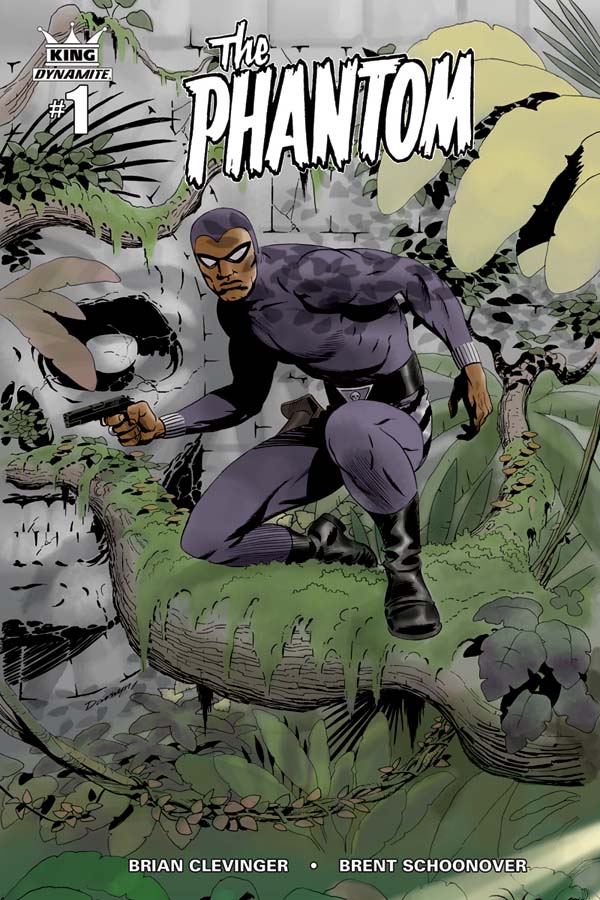 Dynamite Entertainment is proud to announce the January 2015 launch of “The King Event,” an epic comic book event that marks the 100th anniversary of King Features Syndicate. The celebratory event will bring history’s most famous comic strip heroes – Flash Gordon, Mandrake the Magician, Prince Valiant, The Phantom  and Jungle Jim, to comic books with an interconnected miniseries that builds to a grand crossover in May.

The Phantom #1, by Brian Clevinger and Brent Schoonover, reintroduces the daring adventurer Lothar in his new guise as The Ghost Who Walks, as he explores the birthright of a heroic lineage — one not his by blood, but by heroic deed.

Writer Brian Clevinger says, “I think it’s great that Lothar gets to be The Phantom. This guy has no direct connection to the legacy, but he respects it, and he’s the best guy around for maintaining it. This outsider’s perspective lets him question what it means to be The Phantom and it lets us play around with what its ancient legacy means in the 21st century.”

Regarding the plot of The Phantom, Clevinger explains, “It’s the first time in 200 years that worldwide industry has stopped.  Old powers are displaced, new ones are on the rise. Greed and cruelty are everywhere. And Lothar’s gonna be up against people who know more about The Phantom than he does. But I think he’s smart enough to use that against them. We also get to bring back the Bandar and see how they’ve been influenced by The Phantom since helping to invent it 500 years ago.”

“I am very excited to be working on The Phantom. The comic strip was one of my first introductions to cartooning as a kid,” says artist Brent Schoonover (Adventures of Superman). “He’s always been on my ‘Comic Book Bucket List’ of characters to draw in an official capacity. So to not only draw the character, but also get to do something progressive (i.e. Lothar taking the mantle of one of the longest running legacy superheroes in the industry), it’s a real honor. I can’t wait for people to check out what we have in store for The Phantom.”

The Phantom #1 will be solicited in the Dynamite section of Diamond Comic Distributors’ November Previews catalog, the premiere source of merchandise for the comic book specialty market, and slated for release in January 2015. Comic book fans are encouraged to reserve copies with their local comic book retailers. Each series in the overall King event will also be available for individual customer purchase through digital platforms courtesy of Comixology, Dynamite Digital, iVerse, and Dark Horse Digital.