Ask the Archivist: THE SMALL SOCIETY

Today, in this heady political season, I have culled from the musty archives an editorial-themed panel most Baby Boomers will recall, Morrie Brickman’s The Small Society. 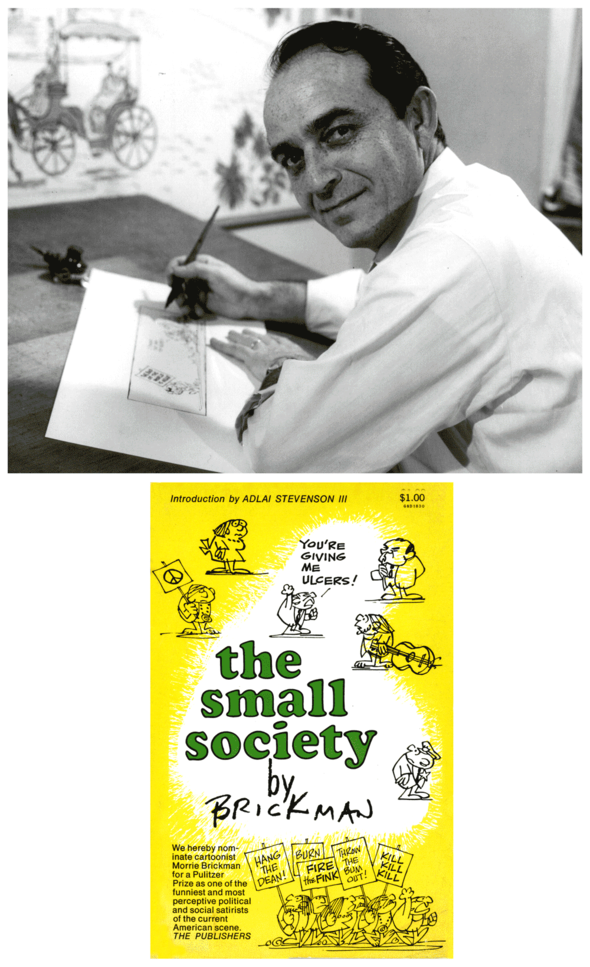 Before “The Small Society,” Brickman was an illustrator and advertising designer and wrote a few books including a home repair volume called “Don’t’ Do It Yourself!”. He did some work for Esquire and a few little remembered cartoon features like the John F. Dille company’s panel puzzle Pic-Trix  and home repair gag  panel, Do It Yourself, and his self-syndicated continuation, Cross Cut.

Working in collaboration with the Washington Star and King Features, he launched the series in the Spring of 1966. At that time, syndicated cartoons were in three categories, comic strips, editorial panels and sports cartoons. Brickman developed a combination of the first two, a feature that could appear on the comic or editorial page.

Like an editorial, it would be about the world of politics and current affairs, including social commentary on the culture of the day.  The name “The Small Society” was a satire on President Lyndon Johnson’s then expanding number of government programs known as “The Great Society.” In a 1973 news article, Brickman said of his approach: “I had a feeling that there was something to be said and the standard editorial cartoons weren’t saying it. So many of them are either just illustrations or they are too serious. Satire isn’t there.  Humor, a laugh, in my opinion is the best way to show how small or ludicrous a thing is. So I’m going on the basis of “The Emperor’s New Clothes,” deflating the pompous or phony, writing of the little guy, “the small society.” 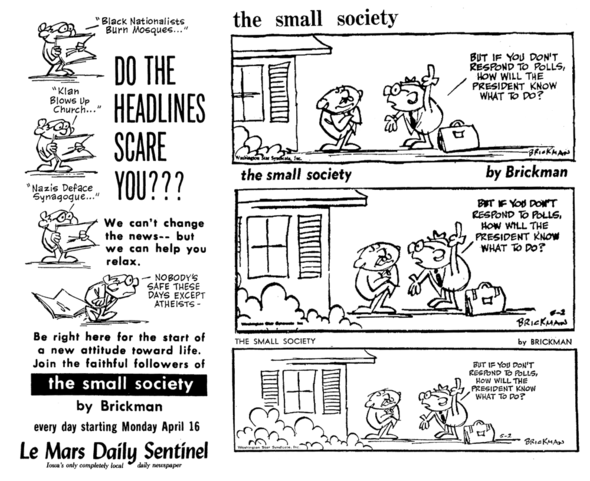 HERE’S AN ODDITY- THE FIRST SMALL SOCIETY PANEL WAS SEEN A WEEK BEFORE IT’S OFFICIAL LAUNCH DATE OF 2 MAY 1966 IN THE HEARST PAPER, THE SYRACUSE HERALD-AMERICAN (TOP), THEN  IN THE TWO SIZES IT WAS OFFERED IN, BOTH REDRAWN, AS SEEN IN TWO KFS CLIENT PAPERS, OAKLAND TRIBUNE (MIDDLE) AND NEWARK ADVOCATE (BELOW).

The hero was Brickman’s alter ego, an everyman named Mensch, who had a wife (just as Brickman did) named Shirl.  Mensch was always giving wry observations on taxes, politicians and his family, often ending with a despairing “Hoo Boy,” which became the catchphrase of the strip. Others include “Ethnic, a hippie character who spouted anti-establishment slogans, often seen with a protest sign. (There’s a lot of protest signs in the strip.) Also, figures in the news were often caricatured as well.

Brickman’s politics seem to run mildly left-of-center, but there was enough pomposity puncturing on both sides of the aisle. The two favorite locales were an outdoor setting with the capitol dome or the UN building off in the distance to establish what the two foreground figures will be talking about. His  humor was pithy, often clever and always a bit on the bleak side, but never inflammatory or controversial. In fact,  Mensch and friends always seem to be resigning themselves to their helplessness and ineffectiveness.  In 1985, Bill Yates joined him, and took over completely in 1989. The series outlived Morrie Brickman, coming to an end when Yates’ health forced him to retire in 1999.

Below is an answer to last week’s posting:

Thank you, Mary. “The Little King” was a really big deal in the 1930’s, inspiring toys, books and even his own animated series at VanBuren studios. I’ll return to do more with him sometime in the next year. I also want to do something on “Sentinel Louie,” but I don’t have all the necessary material. Here’s a question I throw out to any comics sleuths out there: anybody have the date of the last episode of “Sentinel Louie?” It must be in early 1943, but few papers, even those in the Hearst chain, ran his strip that late.

Be sure and vote next Tuesday, and hope you have a candy-filled Halloween.