Friday is National Anti-Bullying Day, which I personally think is a really important thing to acknowledge.  For a lot of kids, bullying makes already-difficult adolescent years truly unbearable.  When your biggest fear is not fitting in, being picked on, harassed, or excluded because of differences you can’t help is awful, and a lot of the time, even well-intentioned adults don’t realize bullying is going on.  (In the worst cases, adults even encourage it).

The hazing scandal at Sayreville High School in New Jersey which is currently in the news seems to fit right into the theme of anti-bullying. So I have attached the cartoon I did about that.

I can’t stand bullies – in the school, or workplace, or even on a larger scale…

When Zippy is bullied, he turns the bully into a harmless cartoon character!

Dennis was proud to be part of a book by Kurt J. Kolka, called BULLYING IS NO LAUGHING MATTER,  dealing with this important topic. 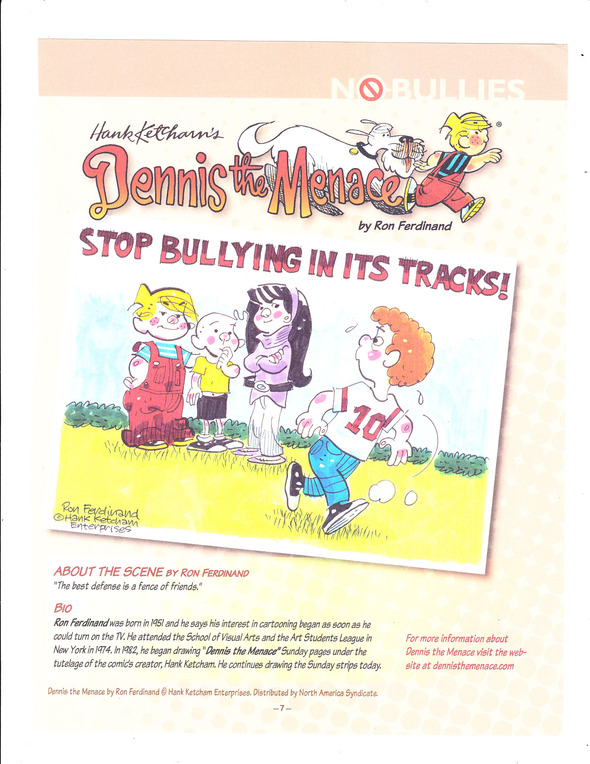 There are two bullies in Curtis’ world that pop up from time to time. Their names are Derrick & Onion, and they are the terrors of the strip. They began as minor characters many years ago but have returned many times as their stories unfolded. In fact, a story of their return to Curtis’ school just played out last week and promises they he’ll have to deal with them once again. Even though they bully the kids, they are usually outfoxed easily. They are the actual dangerous element of the strip.

Their origin was quite ordinary. A bully would appear from time to time, but not as they have come to be, and he did not have a name. Over time the stories became more solid and complicated. I decided there would be two bullies, wherein one was the obvious leader and the other his lackey. Once there, they developed rather quickly and more easily. They appeared when bullies in the strips were not common, and they certainly were just one-note characters. I am always experimenting, pushing the boundaries of strips in general so they came to life. As they went along, they actually developed a following, where the readers worried and cheered for Curtis to triumph. Which he always did.

They were not based on any one bully in my life because I didn’t have any. I had sort of a weird reputation growing up and no one would bother me. They were more based on any and everyone I’ve come across in life who were nasty and had a bad attitude-such as surly waiters. Living in New York there was a lot of that.

I learned a lot from my friendship with Charles Schulz, and often asked him for advice. He once told me to develop ideas that were distinct to my strip only, that no one else could touch. We spoke about these bullies and as a result, Derrick has a round head like Charlie Brown. He was modeled to be the exact opposite of Charlie Brown.

And there you have it. I have told this story of their origin to only a small handful of people, until now.

Several stories ago, Mary made the acquaintance of Nola Wolvenson, an ambitious young woman who stopped at nothing to get what she wanted,  even if innocent people were in her way!  Nola had an affair with her friend’s husband just because she could, which led to the break-up of her friend’s marriage.  She also destroyed a co-worker’s reputation so that she could take his position at their company.  She had hardship in her past, but that didn’t excuse her destructive actions.  Bullies only think of themselves and not other people.  Early on, Mary reminds her of karma and the Golden Rule, which later catches up with her.

In “On the Fastrack,” Wendy’s son Rusty dealt with online bullying in a way that turned the tables on the aggressors.  And, just as a coincidence, my webcomic “Kevin & Kell” has a story about bullying this week.

Spencer has a bully that he contends with on a regular basis. But back in 2010 Stinky Stinkbug and Bobby ran into a bully as well..