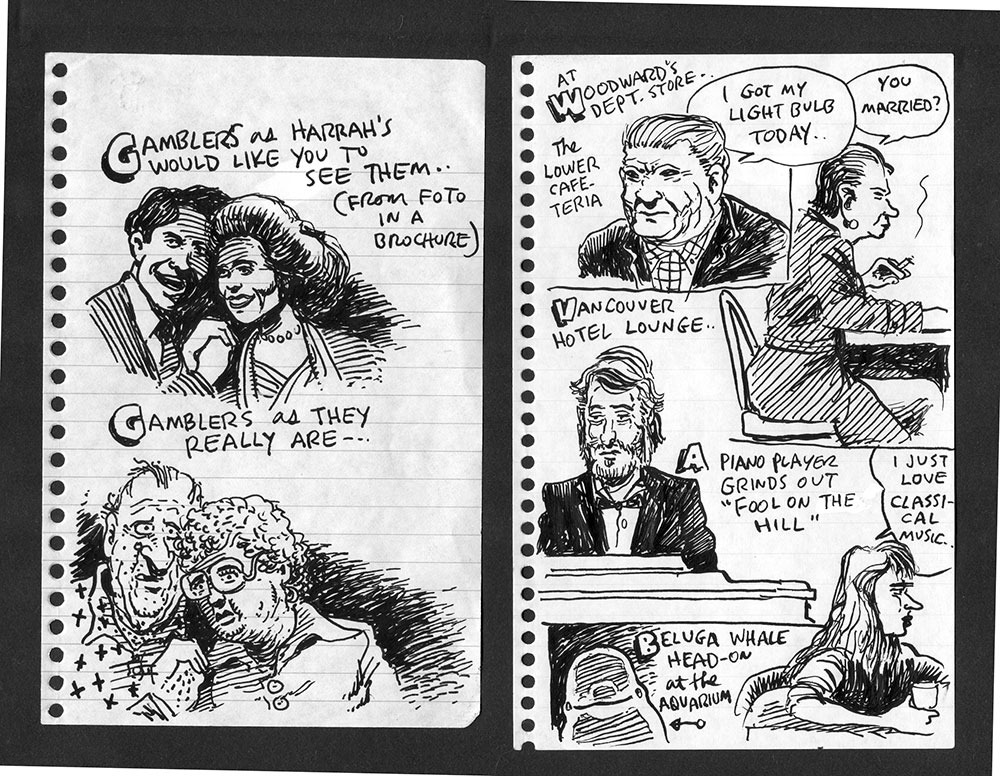 Coming hot on the heels of Dear Diary Day, I thought it would be fun to peek inside some of our cartoonists’ diaries. Here you can see pages and sketches from their sketch diaries and sketchbooks, ranging from random doodles to rough ideas for future cartoons.

I have a lot of old sketchbooks, and so I just grabbed one at random. It is from 1993. The caricature is a self portrait of me when I was very thirsty on a flight to Florida and the attendant came around with salty chips.
The other is a sketch from life of a man on the street in New York with a toothpick in his mouth.
These give a good idea of the range of my sketchbooks – from cartoony to life drawings. 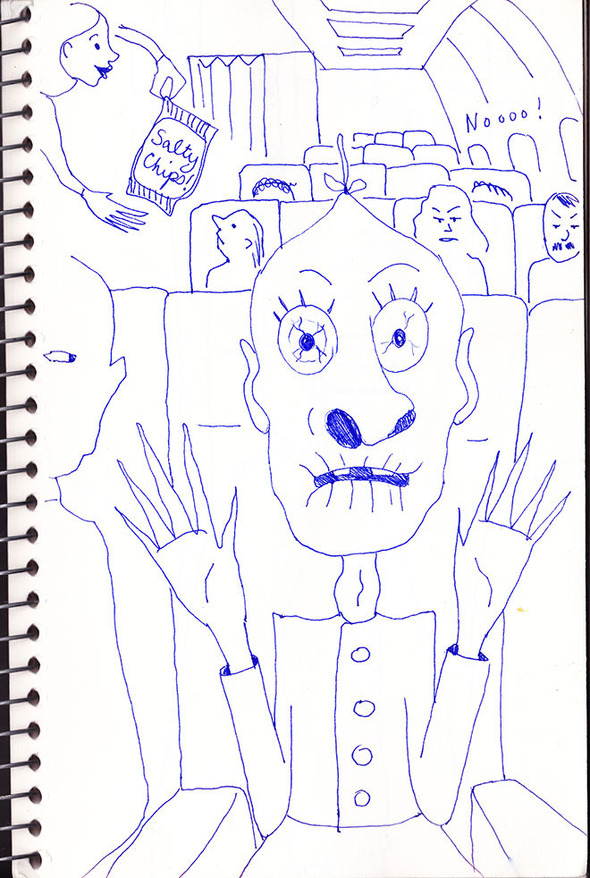 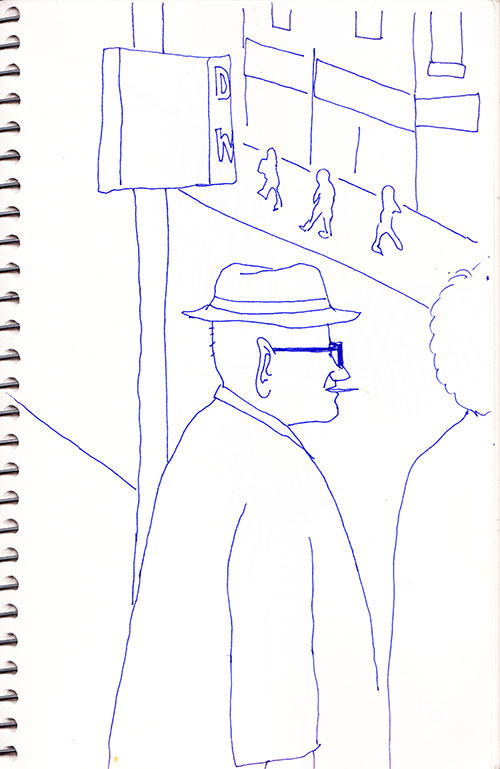 Had to cover up swear words w tiny scrap of paper!! 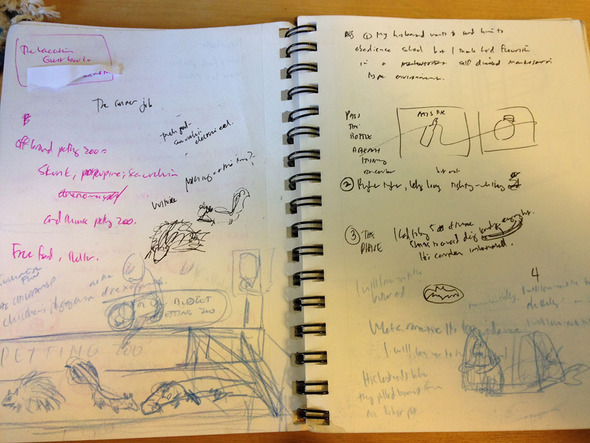 Back in the early days of the DENNIS comic books, Hank would occasionally send his assistant artist and writer to locations like Spain, or Mexico, so they could have first-hand experience with what they were going to portray in their drawings for the Dennis travel issues

In May of 2000, Hank sent Ron and me (and our wives) on a reference gathering trip to Hawaii. He insisted that we take along our sketchbooks.

He wanted us to have the on-site experience of the local Hawaiian environment, so we could draw Dennis and his parents enjoying a Hawaiian holiday during a week of 2 Sunday strips and 6 daily panels.

What a great time we had…thanks to Hank! 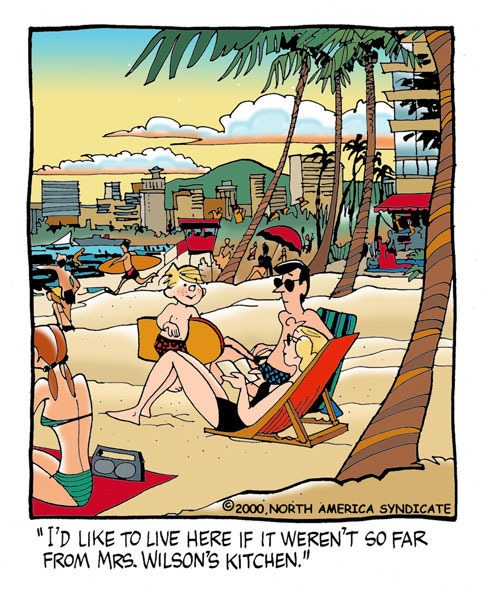 Here is one of the on-site sketches which inspired this daily panel. 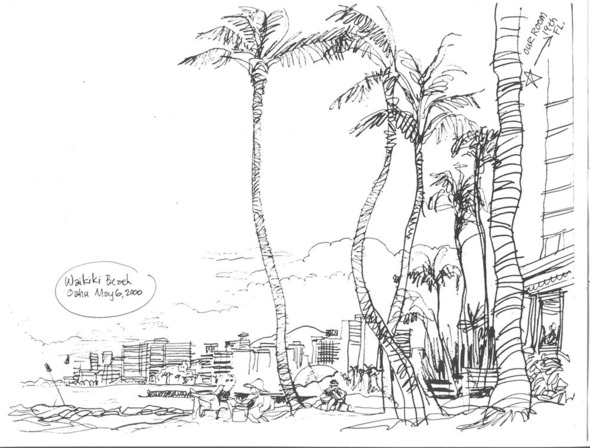 I keep a sketchbook that I call my “everyday book” because it’s not only for drawing and doodling, but for a whole lot of other things too: notes, random thoughts, overheard conversations, first drafts, ideas for comics and stories (mundane things too like flight confirmation numbers, banking transactions, and personal reminders). I go through one booklet every 3 to 6 months, depending on the number of pages of the sketchbook. I doodle a lot. 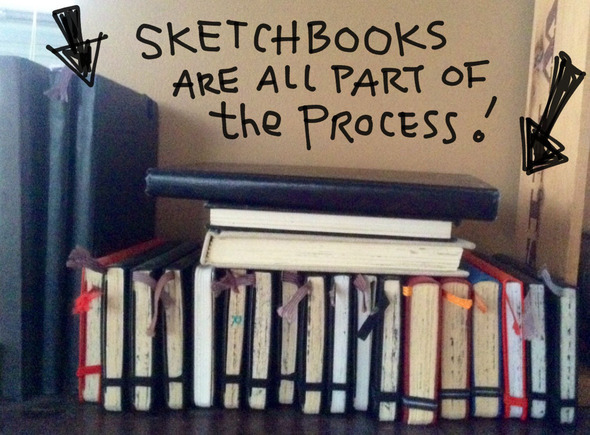 Here’s an example of a note-to-self that turned into a Tina’s Groove week-long series. The rest of the page spread is a typical I-have-no-idea: 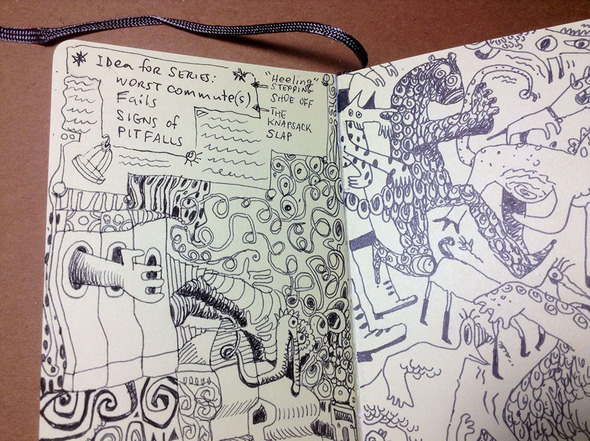 I love my everyday book. Keeping it is all part of living the creative life. Without it I would go crazy!

My Sketch Diary is actually a legal pad which is legible to no one but myself. However, this one from 2010 features several drawings in which I developed Dethany’s Goth unicorn avatar, which ended up being featured here. 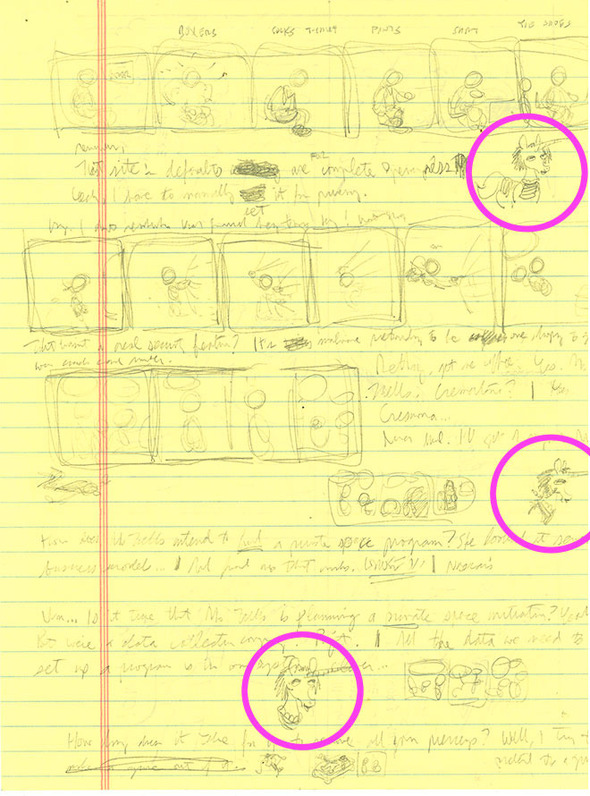 — Bill Holbrook, On the Fastrack and Safe Havens

I’m a complete and total sketchbook FREAK. I would call it an obsession. After a long day of drawing comics and creating art, I like to literally relax in my hardbound sketchbook and let my brain just wander to new places visually and emotionally. I love to fill a page to its brim with all sorts of random stuff. Maybe it’s a reflection of one’s brain, such as this left page full of all manner of manic stream-of-consciousness, and the right page reflecting a personal interest, such as this much-slowed down sketch study of an old vintage photograph of Mata Hari, who I am fascinated with. I love to draw with a fountain pen, mostly, as I love the basic effect of cross-hatching and fine detail, even in mundane sketches. To me, there is no greater joy than drawing for no other reason that the sheer pleasure of that tactile scratch of the pencil or pen to paper and setting your mind free visually, and that’s what keeps me always in touch with why I ever picked up a crayon, pencil or pen in the first place. 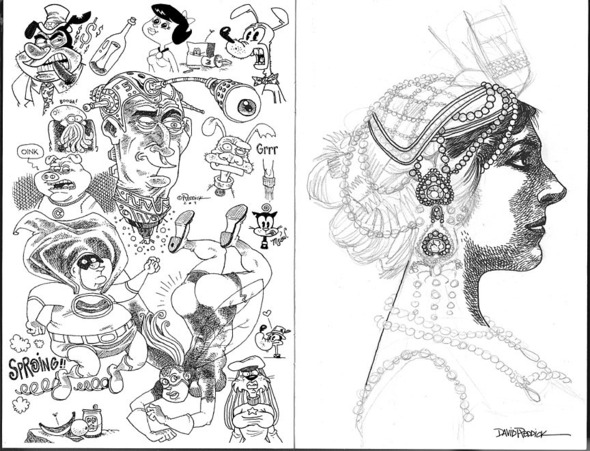 I don’t keep a formal day-by-day diary but I have dozens of layout pads which I work my way through. 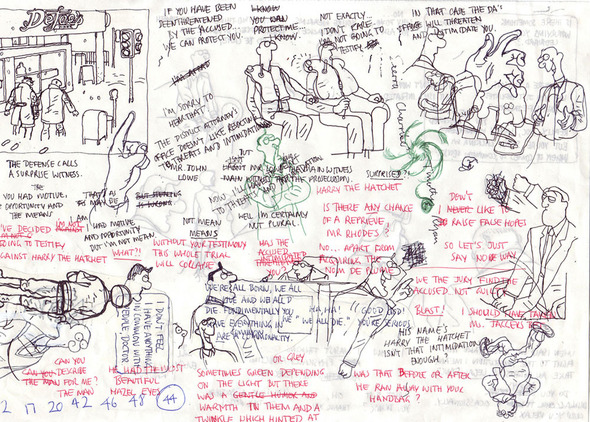 This ideas page is from December 2011.
Because I used all the space, at some point I’ve switched from a black to red pen to avoid confusion.

The numbers at the bottom left of the page would have been that day’s lottery results and the ghostly images and writing are ideas on the reverse side of this page.

I don’t, but I wish I did. My ideas tend to float around on backs of envelopes and scraps of paper.

I’ve kept a diary (or as Americans say, “journal”) since I was 13. So far it hasn’t inspired me to write or draw anything!

I sketch whenever I go on a trip—here are a few pages from my sketchbooks. 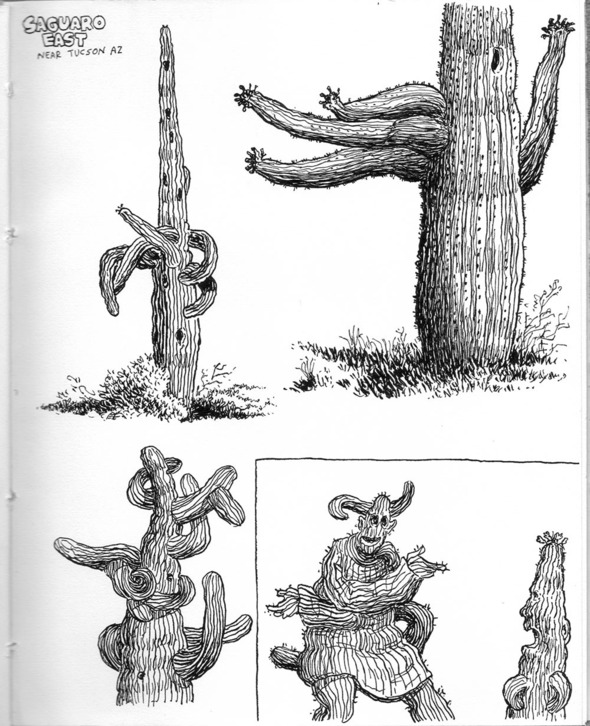 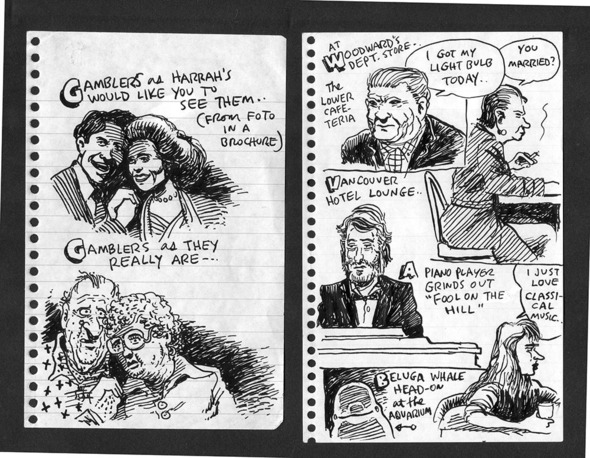 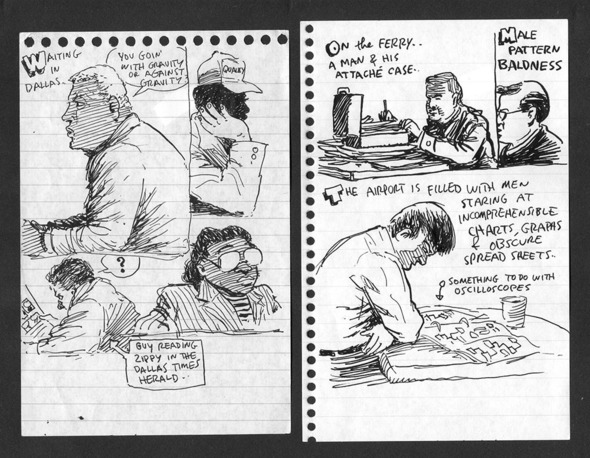 My sketch diary is extremely rough! It consists of thumbnails that often only I can probably decipher. And it often is an old spiral school notebook or piece of scrap paper. The purpose of it is to just capture the idea or action I want to convey in the final art. This thumbnail captures the reaction of Miz Prunelly that I wanted to create in the second panel of the finished strip from August of 2014. 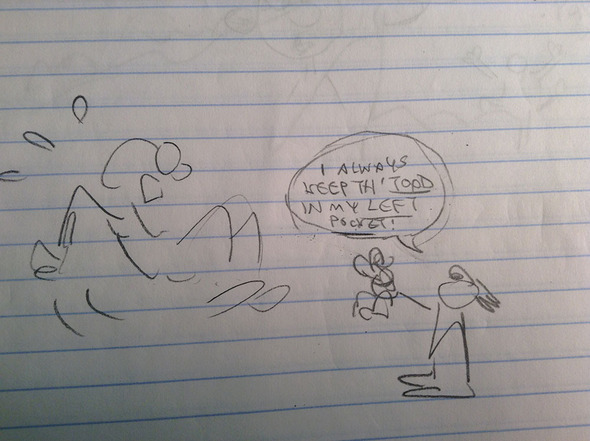