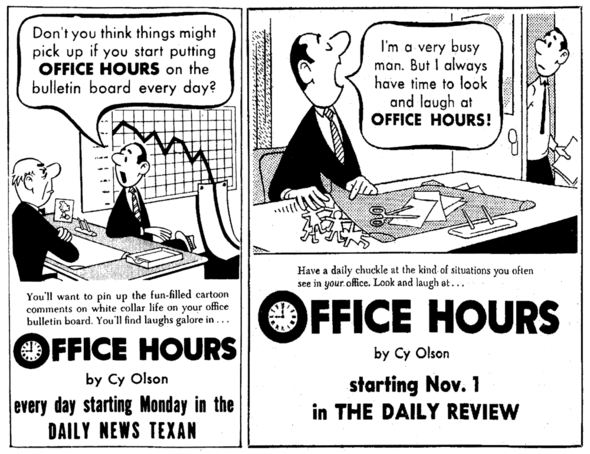 Today I answer a request by Lud from back in June to see some of the panel Office Hours. As requested, here are a few comic panels from 1959-62. These panels were drawn by Cy Olsen, a gag cartoonist who did spots for magazines such as The Saturday Evening Post. His subject was the daily grind of the white collar working world. 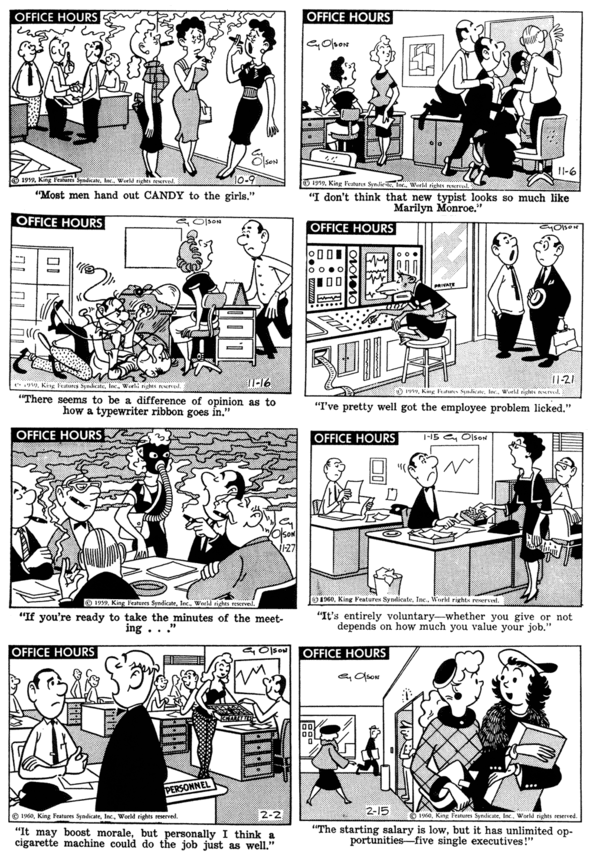 In Olson’s office, perhaps in real life too,  an employee could expect to work his whole career at one company, and the boss could be a tyrant, threatening to end that career if one didn’t yield to his overbearing demands. The predatory  office girls treat the place as a husband hunting ground, and everyone could smoke all they wanted. 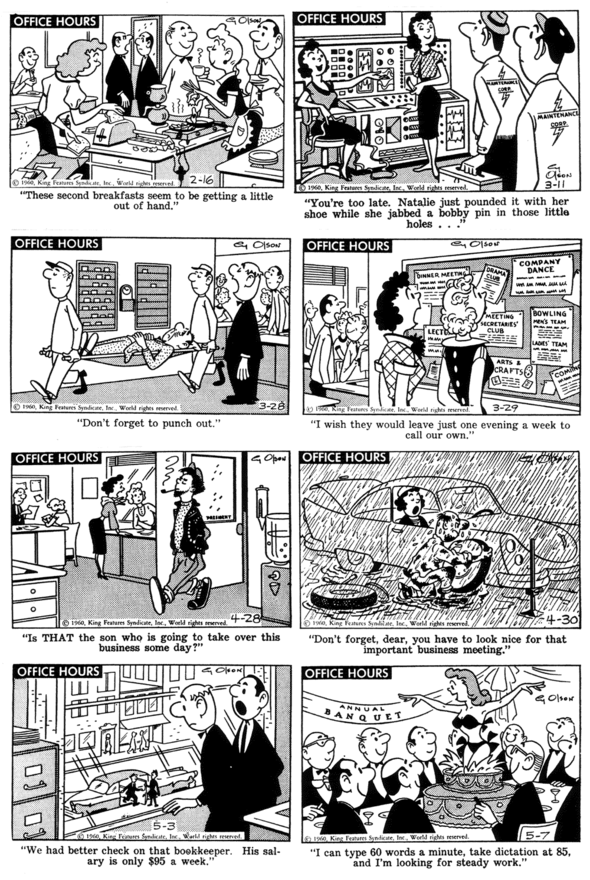 The office of fifty years ago was a different place than now, when equipment needed to run it smoothly included typewriters, comptometers, blotters, binders, switchboards and row upon row of filing cabinets. There’s whole units that don’t exist now, like the typing pool or the filing department. 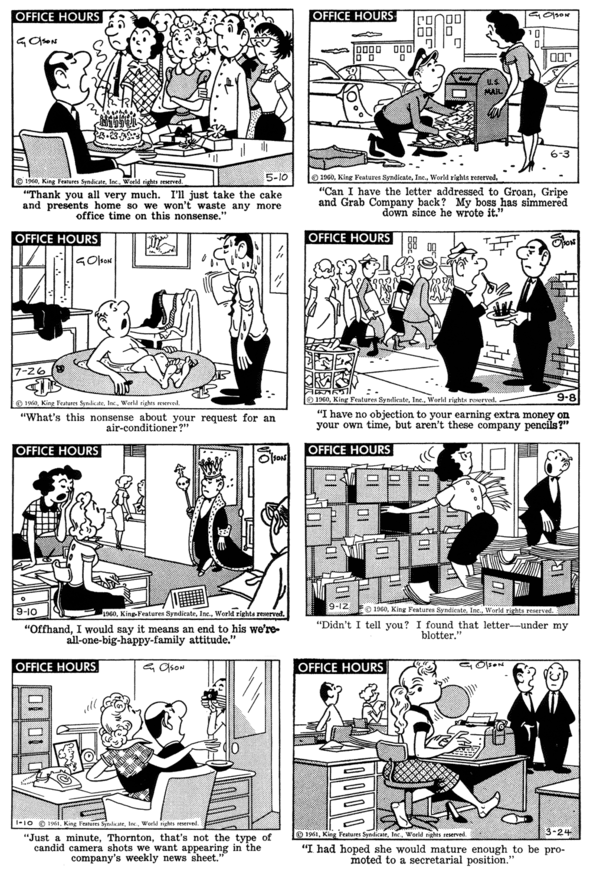 Some might think of the twentieth century office as a pre-computer workplace, but that wouldn’t be completely accurate. In the mid 1950’s, they started to appear at larger corporations, most famously the Remington-Rand UNIVAC. But, this was a far cry from the small desktop models of today, those being huge, sometimes filling a room and requiring an expert programmer to operate it. Just what a computer could do was popularly unknown, and gags about them, as seen here, had their capabilities running the gamut from doing the impossible to being just as full of foul ups as the human employees. 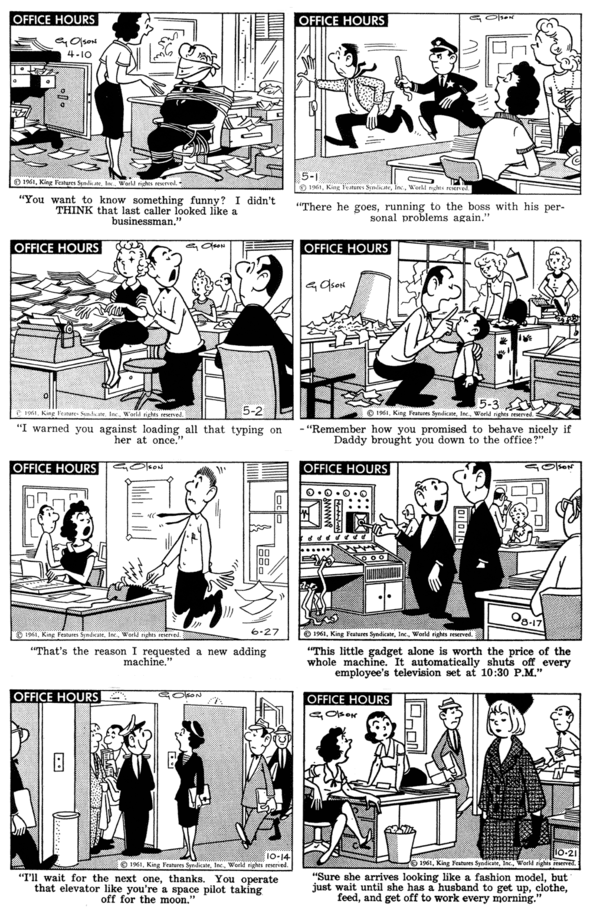 Below are replies to last week’s comments …

To TimThomason,
The question from the 3 September 1939 “Seein’ Stars” (“What three screen actors used to share a single room in a cheap theatrical boarding house while working as chorus boys together on the new York stage?”) was answered the next week by Mr. Murray as Allen Jenkins, Jimmy Cagney and Frank McHugh. Funny how they all got to be Warner Brothers stars at the same time. That must be serendipity … or a studio publicity department concoction, like hundreds of other items in “Seein’ Stars.”

To CameronPB1988,
Sorry, I couldn’t include everything. I had a dozen or more others, but I can’t put up everything.

To albert71292,
Maybe “Blondie” will join the vintage section. I’ll certainly suggest it when the next group is discussed.

To Timothy  Fisher,
“Bunky” was a separate strip. All the Hearst comics had a second, top strip offered on Sunday. These were offered from 1926 to the 1950’s. You can see some of them in last week’s entry, like “Aunt Min” and “Sappo.” They could be separated by a client paper, but you usually see them together just as is shown here in the Hearst papers like the one I used here, the BALTIMORE AMERICAN. See more here.

Thanks for your interest.